Maverick Square pit to be replaced with three-story retail building 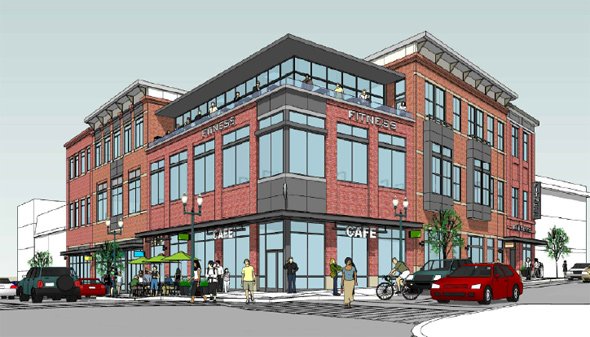 The Zoning Board of Appeal yesterday approved a developer's plan for a three-story retail and office building at 9 Chelsea St. that could feature a two-level restaurant with rooftop dining.

Linear Retail's 39,000-square-foot building would replace the pit it created last year when it tore down the former Rapino funeral home and two adjoining buildings on Maverick Street - and the bow windows that nearby residents had fought to save and have incorporated in any new building. Still at issue: The fate of a historic clock at the site.

Linear's attorney, Richard Lynds, said that to make up for the loss of the windows, the company would be using only the highest quality materials and that the building's brick facade would both complement existing buildings in the square and serve as a gateway to people traveling to the square from Meridian and Chelsea streets.

The mayor's office and City Councilor Lydia Edwards supported the proposal, although an aide to Edwards said the councilor wants to see Linear work with residents to find a solution to the issue of what to do with a historic clock.

Lynds said the proposal represents "one of the most significant private investments in Maverick Square probably in over 40 years" and that it would bring much needed retail space to a neighborhood that has seen significant growth in residential units. He said the company had agreed to increase the size of the project to three stories from the originally proposed two at the request of the community.

Linear does not currently have any tenants for the building; it was awaiting final approval from both the BPDA - which it got last month - and the zoning board to begin marketing the space, Lynds said.

The building will have six parking spaces, far less than called for in the block's zoning.

Melissa Tyler, who owns an adjacent building - the former Welfare building at 154 Maverick St., which now has 16 residential tenants - also raised parking as an issue. She said Maverick Square has no public parking lot and that a restaurant would attract people in cars.

Board Chairwoman Christine Araujo said she is becoming concerned about all the buildings approved in the Maverick Square area with less parking than normally required. "There is always a request for parking relief," she said. "And then there's a snowball effect on the community."

Lynds responded that Maverick Square has a growing need for more retail space and that it is well suited for people walking to the building. He said Tyler's building was itself granted a variance for parking, of which it has none. He added that "to load up this site" with more parking, though, would only lead to more traffic congestion in Maverick Square.

Tyler added she is also concerned about the loss of light and air flow for both her residential tenants and the cafe in her building.

The board's approval lets Linear build a structure that would range from 48 to 52 feet in height - normally, the zoning there would have allowed no more than 35 feet. Lynds said the height would be comparable to some existing buildings in the area.

This looks really good, MUCH

This looks really good, MUCH better than the initial proposal. It's nice to see when a community process results in the developer coming up with a better end result.