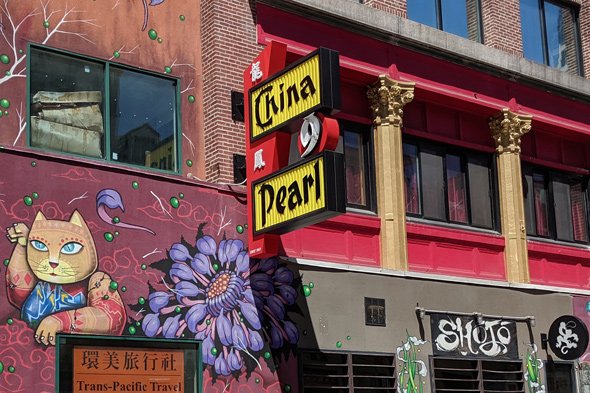 The Boston Licensing Board could decide Thursday whether to punish China Pearl, 9 Tyler St., for what was promoted as a 4/20 dinner at which guests could enjoy roasted pig garnished with their choice of THC or CBD oil.

Boston licensing officials say they warned potrepreneurial caterer Sam Kanter twice, in February and on April 19, not to go through with the event on the restaurant's third floor, which they said was advertised on Instagram. The evening, meant to honor the Chinese Year of the Pig, also got an editorial push by Boston Magazine - although without a mention of the specific location, because Kanter doesn't actually advertise locations and only tells people who have paid to get on her mailing list where to go shortly before the event.

The state currently does not allow pot-infused dining, although the state Cannabis Control Commission last week voted to begin drafting regulations that could lead to marijuana cafes.

BPD Sgt. Det. William Gallagher told the licensing board at a hearing this morning that at 7:37 p.m. on April 20, he walked up to the third floor of the restaurant and found a serving station with a chef carving off slabs of pig and then letting diners decide just how much of a tincture to apply to it. He issued the restaurant a citation for "premise allowing an illegality to take place."

Restaurant manager Brian Moy said that, as far as he knew, the tincture was limited to CBD, which is available at smoke shops across the state, and that no THC, which is the cannabinoid that gets people high, was used. "To our understanding, it was all CBD," doled out in 5-mg drops, he said.

But he and his sister Patricia, also a manager, and on duty in the restaurant's first floor that night, acknowledged they had no direct control over Kanter's event and that they had been trying to help her get her business off the ground.

Although Kanter ran the event, the Moys are the ones facing possible sanctions, which could range from a simple warning to having their restaurant shut for a set number of days, because they own the food and liquor licenses and so are legally responsible for whatever happens in the restaurant.

Moy said China Pearl actually took a loss on the event, for which he said 30 to 40 diners paid $135 each, with most of that going to Kanter. He said the restaurant itself sold 16 or 17 beers and a total of about one and a half bottles of wine.

Kanter also attended the hearing, but said nothing when board member Liam Curran asked the Moys about the use of THC.

Brian Moy said he contacted the licensing board three or four times, starting last spring, to ask about the legality of such an event and that he always got "somewhat vague and not concrete" answers - like check with the state - from whoever answered the board's phones.

He said he also asked a couple of lawyers and pot consultants, he knew and they thought he'd be OK; he acknowledged the discussions were casual and that he did not actually hire a lawyer to research the issue.

Board Chairwoman Kathleen Joyce seemed surprised that Moy would get such answers from her staff. But she said there's no question that Kanter should have known better - because the board very specifically warned her against holding her canaibis dinner series" in Boston.

In addition to the specific warnings to Kanter, the board recently sent a more general advisory to restaurant owners in the city not to serve anything laced with marijuana products.

They have an eye witness -

They have an eye witness - the peking duck.

Somebody needs to tell Suffolk's dry drunk Boy Friday over in City Hall that most adults can handle their vice(s) of choice and to lay off the enforcement of these things.

I know we've got to do this whole weed rollout sloooooowwwwlyy so they can make sure everyone "gets a taste" (see Weld, Frank, and a couple other ex-pols I'm forgetting atm) but enforcing stuff like this only pushes these types of things underground and thus facilitated by criminals.

Get your priorities straight, people.

extra ridiculous, even for the licensing board

so many "is this real life, or just licensing board" moments:

it's a wonder anybody wants to own a restaurant in this town except giant corporations who can bankroll the absurd license costs and then the lawyers to defend them.... oh wait.... that's what's happening....

The Boston Licensing Board issues licenses. That's its thing. In this case, the issue is whether a license holder - the Moys - allowed their premises to be used for something possibly not permitted under either state law or city ordinances. That's why they questioned the Moys but pretty much left Kanter alone, because their jurisdiction is pretty much limited to the license the Moys have (or more technically, their company).

talk about being hungry 2 hours later.

p.s. to 'anon': anyone good enough to come up with that Peking duck comment ought to have a name.

Have you tried their

Have you tried their potstickers?

And it was a lot of fun, pretty chill as you would expect and the food was amazing. I barely even felt high. The more I travel around the world, the more I realize Boston's puritanical stance towards everything makes it a no fun zone. And to the person who said pushing this further underground facilitates criminal activity, it doesn't but is someone evading licensing restrictions a criminal. I think not since it's a civil penalty.

You need a dancing license if people want to dance. Otherwise people will need to stop dancing.

You need 500K at least for a liquor license. (Unless of course you're looking in a neighborhood Pressley graciously helped to start the reform of the licensing laws)

Barely any bars with couches to actually lounge.

And of course, everything closes at 2.

Anyone who has experienced nightlife around the world knows Boston can do it better.

What was in the dropper?

Were you told it was just CBD?

Once again we must wonder why

Once again we must wonder why the licensing board exists.

Take a look at yesterday's agenda

There was a lot more than just this one incident (the one I obviously thought was most newsworthy), including restaurants charged with serving alcohol to minors, or people who should've been shut off earlier and overcrowding.

In recent weeks, the board has also had a string of hearings on restaurants with emergency exits found blocked or even bolted shut. I admit I haven't written about those because so far, they've all involved what appear to be one-time accidents mostly involving workers closing up for the night (so they lock a door or move a table in front of one as they clean up, that sort of thing), but isn't that, along with the overcrowding, especially in this city of all places, the sort of thing you want somebody looking out for?

And the reason for hearings is to determine just how serious the incidents were. Take the first one on the agenda: Employee assault and battery on a patron. Now, we have had cases in Boston of bouncers whaling on people's heads and the like, and the board had hearings on those incidents, but in this case, the police report that led to the hearing was based on the patron's word of what happened, which conflicted with the video the bar provided to the board: it seems a patron knocked a bouncer to the ground - and the "employee assault and battery" was a barback pulling the guy off the bouncer.

Ringing in the new year in Chinatown
Man charged with raping woman at Chinatown hotel, holding her there for ransom
Man charged with punching two Asian-American women in the face in Boston; was already locked up for attack on elderly woman in Cambridge
Man robs Chinatown bank with a spray bottle, police say
Masshole parks in bus stop, bus pulls up ahead to let off passenger in wheelchair, Masshole can't wait, drives over wheelchair ramp, police say
Beaming at Chinatown's newest school, now under construction