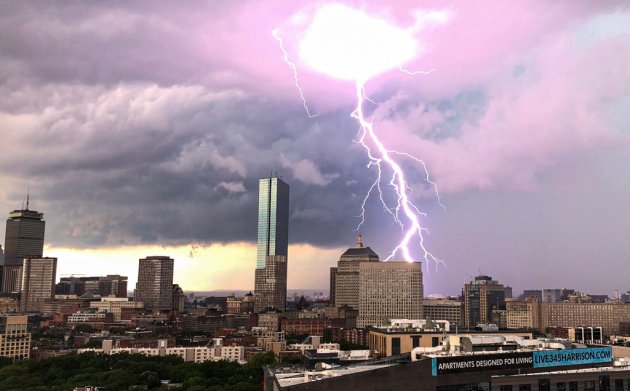 The National Weather Service has issued a severe thunderstorm warning until 5 p.m.for parts of the Boston area, including the Back Bay.

Some flooding in Somerville

Dangerous road conditions on Shore Drive due to heavy rain and flooding. DPW crews on their way @311Somerville @SomervillePD pic.twitter.com/zfleUj1NUx

That is *not* good for your car

I would have avoided driving through this.

That's quite the photo! I'm always amazed when someone manages to capture a lightning bolt on "film." I'm pretty sure I heard this particular one in the Fort Point area. BOOM!

I've gotten two on film but

I've gotten two on film but never this good. One of the real issues is getting a good vantage point that you are safe in/not wet.

You can tell he was focusing on the John Hancock (it's right in the middle) which would have been an awesome shot as well.

Set your camera so that the proper exposure is several seconds. Most basic settings will let you do up to 30 seconds if you can make other adjustments to avoid overexposing. Then find a good lightning storm and snap away every time the shutter closes. These are rarely if ever lucky shots. By the time your eyes and mind see a lightning bolt, the light is already gone due to the time for the light to travel and mostly for your brain to register the bolt and send a signal to your fingers to press the shutter.

If you have a RAW setting, use it. It gives you a lot more tonal range to play with, as the lightning flash will burn a lot of pixels.

Primary Return Stroke from the Ground to the Cloud establishes the path to enable major amounts of current to flow for tens of miliseconds heating the air to 5 or so times the temperature of the Solar Photosphere [about 50,000 degrees F] and producing a fully ionized plasma column -- this is the source of most of what is visible and the major destructive effects of the bolt

By the time you hear the thunder, the light has long since reached you and is gone, the current is gone, the ionization is dissipating and the air is cooling back to normal atmospheric conditions

Sometimes chronic GAS is a boon

At some point I satisfied an itch in my chronic Gear Acquisition Syndrome by getting a 15-stop ND filter for a project*. It is absolutely the perfect thing for shooting lightning storms because you can leave the shutter open for ages and ages.

I actually ran to grab it yesterday when the storm started, only to find both of my batteries were flat, otherwise I had hoped to do a multi-minute exposure (f/45 lens at ISO100 with a 15-stop ND filter). Maybe next time.

* The project was spending all my disposable income on expensive toys

Tree down in Cambridge

That storm just brought down a tree on Elm Street in Cambridge @universalhub pic.twitter.com/hYIUKJr0VA

Flights into and out of Logan

Flights into and out of Logan are on hold.

Foreshadowing for what is apparently a NKOTB concert?

This motley assortment of characters parading down Causeway know how to bedazzle!

Someone is trying to summon Gozer!

And crossed the streams.

That's not a lightning bolt

It's an alien invasion.

This is Earth, isn't it?

The bolt is not coming so much FROM the sky, but from the ground UP ! That is what Tesla was talking about when he tried to provide free and endless electricity. Now who would not want that ?

Smart home, and any other thing with intergrated electronics. Having what amounts to a constant solar flare inducing current would have made our modern world a very different place.

Reason number eleventybillion that lightning rods are our friends!