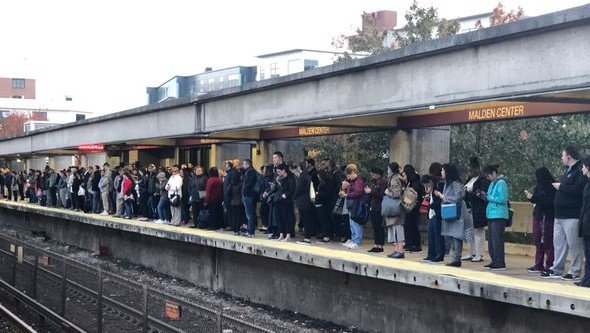 The T reports no Orange Line service between Sullivan and Tufts "due to the late completion of weekend work" - the repair work that was supposed to make the Orange Line more reliable.

The T began running buses between Sullivan and Haymarket for riders who weren't able to get off further up the line and catch commuter rail. The T later explained the "late completion:"

This weekend's Orange Line diversion has been extended through the morning rush due to an incident involving 2 contractor vehicles and an injured worker. Our crews are working to finish the planned work and safely resume service. We have begun an investigation into the incident.

Only one T employee at Sullivan yelling directions, so people everywhere getting on the wrong buses. Strangely, @MassGovernor and @spoftak nowhere in sight.

Julio Salado adds the morning started off as a complete dud, reporting at 5:40 a.m.:

Hey MBTA why did your train announce bus shuttles AFTER we were on the train Inbound from Malden? Not giving us any options. Not fair.

He posted photos of the resulting crush for a bus at Sullivan: 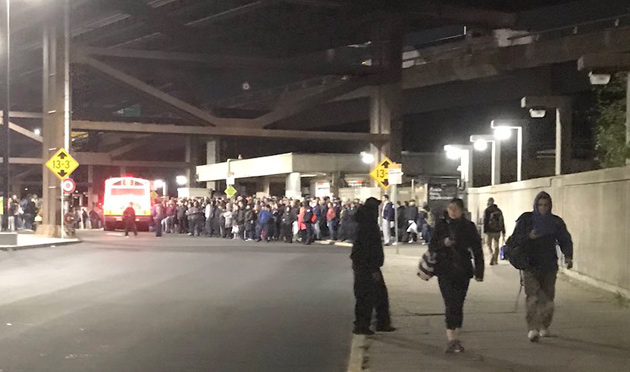 I got a train 20 mins earlier than usual for a work engagement and am barely going to be there at my standard time. Thank god I didn’t leave when I normally do.

With no Orange Line into town, some riders tried to get onto the Green Line:

Hey @mbta since the #orangeline isnt running and we have to take the green line at North Station maybe run more trolleys? Thanks @universalhub pic.twitter.com/UmBXta0jWm

All I can do is laugh at this point.

So now we’re laughing and

So now we’re laughing and complaining about an injury to a construction worker delaying our commute. This is a new low point for UHub.

Low point for the T

The T has not come out and said a worker got hurt. If they did, more people might be sympathetic.

Two hours after they tweeted that it was "due to the late completion of weekend work". Can't even provide a straight story.

As of 9:10 am no mention of an accident on mbta.com

Apparently? the T mentioned it elsewhere , but as of 9:10 am there is no mention of an accident on mbta.com. Still says it's due to

Said to my wife this morning after hearing about this through endless rambling requests for donations and a "oh by the way" after the intern reads news headlines on WERS, that it would be attributed to an injury thereby making the incident criticism-proof. That is how cynical I have become after riding this rattle-trap for too too many years.

If they blame an injury for lost work

its called creative accounting. This phantom "injury" is used to block any immediate criticism as well as soften the impact later by ignoring the real reasons for the delay; complete and total corruption with a healthy dose of inept idiocy.

Very patriotic and much-WINNING "Murkin'" sayin' THIS is a low point for UHub without any sense of irony whatsoever.

The shit show was going on for hours with no mention of an injury. MBTA could have got their story straight to start with. But I guess you're happy for another opportunity to piss on UHub. Why don't you just leave since you find it so disagreeable?

stop at Oak Grove this morning to accommodate Orange Line passengers. No fare for people traveling between North Station and Malden Center/Oak Grove.

Thanks for this roadman

But the T website says nothing about this. It only references shuttle buses and the Green Line.

Seriously, fxxx the T . Of course, according to a recent poll, 73% of you still love Charlie Baker, who has absolutely nothing to do with this incompetence, (other than the photo opp this weekend admiring the Orange Line work.)

Delay UP TO 15 MINUTES
Haverhill Train 201 (7:35 am from North Station) is operating 5-15 minutes behind schedule between North Station and Haverhill due to the late arrival of equipment.

Train # 201 does not use the Reading Line

Instead, it goes down the Wildcat and the Lowell Line. So that was a separate issue.

The late arrival of equipment

The late arrival of equipment very well could have been due to delays loading the Orange Line crowd on the previous inbound trip.

I'm so damn angry. It's not

I'm so damn angry. It's not enough that they shutdown the entire goddamn line for a month- now they're just going to spring this shit on me without warning? Great, fucking great.

The real cause of this clusterfxxk

Oh, I just don't know where to begin
Though he says he'll wait forever

Yeah, a worker was injured in a mishap, so I heard.

I was just thinking this weekend, what happens if they dont finish their work by Monday morning? We have our answer.
Next up- Red Line weekend "suspension" during peak holiday shopping season. What could go wrong?

And with zero information

And with zero information about shuttle buses right now.

I'd be willing to bet my monthly pass that there will be NO shuttle service to DTX for the Red Line closure, just like how it was for the Orange Line.

These closures are a pain in the ass but doubly so if you live in Eastie...you'll either have to take the SL3 to South Station for your Red Line shuttle, or take the Green Line to Government Center, switch for a stop to Park, THEN get on a shuttle...then get back on the Red Line. Most people are going to work on the weekends too, natch.

I guess I just won't go anywhere on the Red Line until the end of the year!

The T app that I use includes their Twitter feed and that has an entry stating that there was an accident that injured two construction workers. This is why the construction equipment has been delayed in being removed. There may have to be an OSHA investigation (speculation). The Tweet was posted at 7:16 AM. The following replies were all about poor service and frustration -- no compassion for those injured. Fascinating. So we'll just take the #39 from FH to Copley and go around it.

T alerts says nothing about an accident

due to the late completion of weekend work

Nothng at all about an accident.

this is a new excuse 2 hours after they said work was not finished, then there was a worker incident. Good luck on the #39, i am sure that wont be packed and delayed.
Saw the first notice and drove to work.

there's not one iota of responsibility among the entire organization so who cares what they post, really?

If they were being replaced by "busses" I'd be happy.

Merriam Webster has something to say about the plural of bus

How in god's name

That's not how the T operates

It's simply not the T's method. Whenever any emergency happens, be it snow or something like what happened this morning, they ALWAYS act like it is the very first time it ever happened. Every. Single. Time. Not a single T employee (on the rare occasions when you can find one) ever knows how to respond to an emergency. Ever. I have witnessed this personally for over forty years.

It’s a shame there wasn’t another way to get people to and through the city. Regionalrail.net. Read it.

ARE YOU SERIOUSLY USING A WORKER INJURY TO PITCH REGIONAL RAIL?

AT 9:13 AM THERE WAS NO REAL AWARENESS OF WHAT CAUSED THIS MESS - ONLY VAGUESPLAINING BY THE MBTA.

THERE ARE TIMES TO SPEW FAKE OUTRAGE IN ALL DIRECTIONS BUT THIS WAS NOT ONE OF THEM.

THIS IS THE PROBLEM WITH ANON POSTERS.

The injury was reported well before 9am

Globe on down. As always. TransitMatters didn't check before posting. You and TM should actually release an apology.

Wasn't too bad about 7 am

I commute from Quincy (via Ashmont) to Sullivan every morning - already a long commute. Although this shutdown was annoying, it only added 15 extra minutes. The shuttle was surprisingly quick.

I got to Sullivan just before 7 am, though, and I can imagine it being worse for people later in the morning. I dread this still being in place this afternoon.

The worst parts of this seemed to be...

1) not a lot of good info on where to go, especially for people for whom English is not their first language (this was non-existent, as far as I could tell). The biggest holdup seemed to be passengers who did not know what was going on. But they're not to blame. The only person giving out any directions at Haymarket was yelling at people. The driver of my red line train was also yelling at people. Yelling seemed to be the default communication style of the morning.

No one yelling at Park, but also no one helping people out here. I felt thankful that I use the Green line regularly, and knew what direction Haymarket was, what stairway to use to get to that direction, etc. That definitely saved me a lot of time.

2) backup at Sullivan, with so many regular route buses, shuttles, and a bunch of T repair trucks blocking up the busway - all the way out to the rotary of death. Our driver nicely let us out on that road that runs through Sullivan, getting out of the bus to block traffic and make it safe for us. Otherwise it would have easily taken us another 10 minutes or more. This driver was great, actually, about as calm and patient as someone can be in a situation like this. This is how officials should act in tense, confusing situations.

And the service is still suspended. "Minor" accident indeed.

I wasn't originally planning to bike to work

Then there were two missed buses during rush hour.

So I biked to a train station.

Then I realized a full on clusterfuck was in full cluster.

Fortunately, it was a beautiful day and I didn't sweat up my work clothes too much.

Perhaps those who are fed up might consider planning out a bike commute for one of these lovely fall days when the T can't stop failing, then give it a trial run.

Coming home my maps app said "51 minutes to home" for driving. I said "bitch, please" and rode into the sunset.

The all important Dunkin' tracker
Malden charter school closes, citing coronavirus
Police say the Lamborghini crashers stabbed a man in Cambridge the night before - and had been robbing markets across the area
Lamborghinis are temperamental beasts; not everyone can drive one
The new Orange Line train made her so excited she could yell; but at the second stop, it was taken out of service - oh, well
Some porch pirates have bushy tails