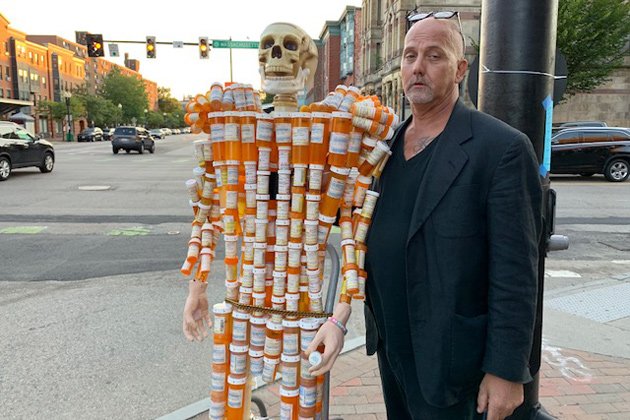 Stand at the intersection of Mass Ave. and Washington Street long enough and you'll see a lot of unusual things. But even there, Frank Huntley and Pill Man stood out.

The Worcester man and his creation - a model made mainly of old opioid bottles with a skull for a head - have been traveling New England to bring attention to the opioid crisis and to show people with addictions they can start again.

"Pill Man came to Methadone Mile to open eyes and save life," Huntley, himself a recovering addict, said on a visit there the other day, summarizing his mission as an activist advocating for a drug-free society.

Wearing a black blazer, standing next to Pill Man, Huntley shared his story as a former drug user.

"My daughter was two when I started; she was 17 when I quit" - in the autumn of 2013, the Worcester resident said.

For 15 years, Huntley collected containers of opioids such as OxyContin and methadone, and used them to create reated a figure characterizing himself when he was a user. "I want to share my story and give them hope," he said.

"Drugs are making us die too young, way too young," he said. "It's a nightmare. We need to make sure these other prescription places, other pharmacies, other hospitals are educating us and we not going to lose any more people."

His visit to Mass Ave. and Washington Street took him into Methadone Mile, the heart of the Boston area's opioid crisis. "I need to be here where I can educate people and show them that is not going to stop unless they wanted to stop. So now all I want to do is help and if I have to go to every city and every town, I'm going."

The presence of Pill Man in the South End did not go unnoticed. Drivers and pedestrians stopped at least for few seconds to look at the bottle figure.

Ishtaiq Naqwi, the manager of a 7-Eleven in the area, said the opioid crisis is a daily struggle for him and his store. "People fight, come to the store and steal items, the police is involved, this is a hot spot," Naqwi said.

Pill Man "is a very good thing to do," he said.

Huntley said that recently he went to the White House on the International Overdose Awareness Day. Advocating on behalf to the families that has been impacted by drug abuse and educating the population. "I am going to put Pill Man on every corner I can and truly try to help families now. Because I lost my family for a lot of years and now all I want to do is making sure families understand what these drugs are doing to our families," he said.

Huntley even went to the headquarters of Perdue Pharma, the company that sells OxyContin. "I went to Stanford, Connecticut and I put Pill Man outside their doors, to show them that I wanted help."

Huntley said his goal is to go to share his story and show recovery is possible, in as many places as possible. "Please go get your life back. Please go get help. And if you want the help, there is help out there; but you have to want it."

He should make one with cigarette and vape thingies too.

I can’t tell who is who,

Making fun of a recovering addict who is trying to help other addicts == comedy gold!

Comedy with a message.

Driver hits ambulance at Mass and Cass, runs away, is arrested on a rooftop, removed via fire ladder, police say
A tribute to Kamala Harris and her meaning for girls at Boston Latin School
On Martin Luther King Day, police called in to stop demolition of garages at historic house where civil-rights documentarian lived
Judge clears way for trial of BC student for boyfriend's suicide
Senior who was beaten in his own apartment on Pompeii Street in Roxbury on Christmas Eve has died
Dorchester man admits he secretly videoed students in restrooms at Boston Latin School