Police: Scooter driver flipped off cops as he rode away, but then his scooter died

Cambridge Police report on an incident shortly before 1 a.m. yesterday in Kendall Square, involving a motorized scooter and a driver who "failed to stop and was observed from a distance operating in a reckless manner while making obscene hand gestures at officers."

Wouldn't you know it, the guy's scooter just died on him as he got to Mass Ave. and Memorial Drive, police say. Officers caught up with Amara Kenneh, 39, of Roxbury and arrested him on a charge of failure to stop for police. He was also issued a ticket for numerous motor-vehicle infractions, police say.

Was pulling out from my street safely after stopping at a stop sign (this is an intersection where I was hit by a car running said stop sign) and an aggressive driver that was going too fast came upon me, laid on the horn, tailgated me and cross over the double line in doing so..........only to have to stop behind traffic maybe 10-20 yards later for a red light.

Another car is in front of me, aggressive driver behind. Green light turns, take the left onto Cambridge St. where there is two lanes sort of but it merges into a bike lane. I take that far right lane, the car is still getting closer and the window comes down, so my finger comes out cause I'm not hear for whatever they have to say.

Its an unmarked cop car, lights go up, I stop to the side and the dude steps out mumbling something about "You made me miss that light. Also its not uuuuhh not cool to flip me off." I'm having none of it and throw it right back at him. "Oh really, its it illegal to flip you off? What about laying on your horn, tailgating me and crossing the double line there?" The adrenaline was pumping so of course I'm shaking and def not sounding as eloquent and put together as typing this sounds. I didn't even address the fact that another car was stopped at the red light in front of me anyway, so he wasn't making that light.

He smugly smiles, hands up and laughs "ok, have a nice day!" Hops back in and drives off. Cops in my family just LOVED hearing my reaction to that. "You really handled that poorly." Yeah, the person getting tailgated and honked at was acting poorly. Some cops suck.

But in the name of a civil society...

Just because it's legal, it's still a bad idea.

My work friends and I greet each other every day with a birdie. All depends on the situation. I'm not going to walk around flipping off the police all willy-nilly, but if they're acting uncivil themselves, by all means, let them know it.

good luck with that, though

If Officer Testosterone decides to make your life miserable in exchange for the 30 seconds of inconvenience you caused him.

decides to make your life miserable in exchange for the 30 seconds of inconvenience you caused him.

Literally what happens to cyclists with some motorist when they perceive our existence on the road as inconveniencing them.

What inconvenience did I actually cause?

"Sorry for making the traffic ahead of you one car fewer, asshole."

to a man, some are "ok" but its like that kid in high school who was on the football team and sat next to you in Geometry class and you'd joke around CONSTANTLY, but as soon he was with one or more football players he wouldn't acknowledge your existence

its that same kinda pack mentality that police departments look for

I have been flipped off a

I have been flipped off a handful of times in my career. I just smile and wave politely. You aim low, I aim high.

Was that legal for the officer to pull me over if what I did wasn't illegal?

Oh right can't question authority or exercise my rights like that, gotta blindly back the blue. 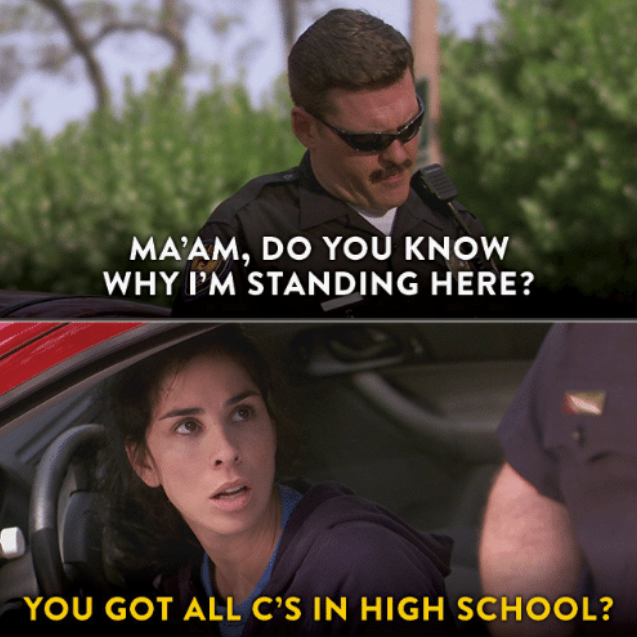 He'll end up in jail once they figure out how he's calculating overtime...

But just to clarify, is it

No, but it's just not very smart, that's all.

Did he have "SCHMUCK" painted on the scooter?

flipping the bird...NEVER a good idea

Not sure what happens to people behind the wheel but it is NEVER a good idea to flip anyone the bird in the car. You never know who the other person is.

Not to mention that the majority of people I have seen toss the bird around wouldn't say (or do) s#&t if the interaction were face to face.

People need to stop acting tough behind the wheel and pay attention to the road.

Nor from a motorcycle, look what happened to Billy.

It's especially risky to flip off a cop.

It's especially risky to flip off a cop or any other law enforcement person, particularly nowadays, because cops have become much more hair-trigger, and there's no telling what a cop may do if one flips him/her off.

One day, you could sing the body electric - with power generated by your own body
Brooklyn Dodgers fan sought for Harvard Square bank holdup
Man waiting for a bus in Cambridge peppered with Orbeez gel capsules, police say
The mounting toll of Boston's resumed construction boom
Harvard has a long legacy of slave owning
Driver charged with texting while driving down Mass. Ave. in Cambridge