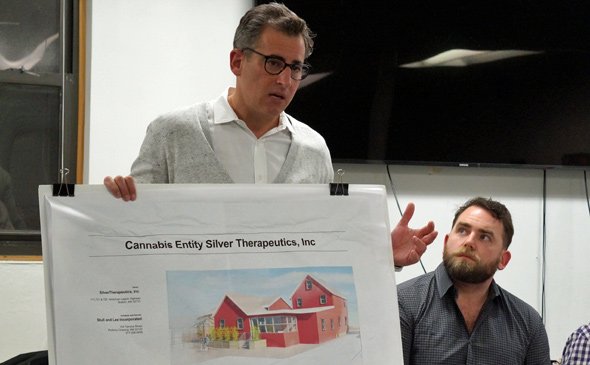 A company about to open its first pot shop in Williamstown hopes to come to the other side of the state and turn a gardening and flower shop on American Legion Highway in Roslindale into a dispensary that would offer pot to both medicinal users and people who just want to get high.

Silver Therapeutics's owners, who have a tentative 40-year lease on the City Farm property, aid they would tear down most of the current garden shop, which they described as in poor shape, but would keep part of one greenhouse for use as a training area for local residents looking to get into the marijuana business. The store itself would have roughly 3,000 square feet of space.

Most of the company's owners are out-of-towners, but one investor is Bruce Bickerstaff of Roxbury - a member of the city zoning board. It also has a local lawyer and security consultant - former City Councilor Mike Ross is handling legal issues and former BPD Superintendent Joseph Harris security matters.

At a meeting of the MHCM/American Legion Neighborhoods Association tonight, residents expressed concerns about traffic, crime, children and landscaping.

American Legion Highway is a commuter shortcut full of curb cuts for both stores and residences - with virtually non-existent MBTA bus service. Residents worried that a store that might see 350 customers a day would only exacerbate traffic and lead to customers doing stupid stuff like double parking on the busy road.

Ross said the shop would put in around 16 parking spaces in the rear - and that there is enough room in back to add more parking if required. He said the store's entrance would also be in the back - there would be no entrance in the front to attract passers by. The company hopes to hire a traffic consultant to look at traffic issues and design an entrance and exit that would minimize impacts on the roadway.

Residents expressed concern about people using their backyards to try to break into the store and rob it, and about the sort of element a pot shop would attract to the neighborhood.

Ross said Harris obviously knows from security. Company President Joshua Silver said that stores no longer have to have large amounts of cash on hand, because Massachusetts banks have begun giving accounts to marijuana companies, which lets them do many of their transactions electronically. The marijuana in the store - which would be delivered from a company growing facility in Orange - is kept in a vault, Ross said.

Capt. Joseph Gillespie of District E-18 said he had reviewed the company's initial security plan and pronounced it good.

Although some residents were convinced, others were not buying it. One said he likes being in a safe neighborhood with little crime. "This is the first time I've ever been concerned about living here," he said. Another resident, though, said he worried the shop would lead to more incidents like one in which his neighbors were tied up and robbed by home invaders who masqueraded as police.

Residents worried about people buying pot and then distributing it to local kids, which led to the next big concern:

Residents noted the proposed location is right across American Legion from the Home for Little Wanderers and down the street from the Haley School. There's also a nearby DYS facility and a Mormon church. One resident recalled how easy it was for him to get liquor once he turned 12. Even if kids are barred from the over-21 store, what's to stop customers from sharing their goods with local kids?

Ross said everything the store would sell would be in a bag with an embedded RFID chip, so in the unlikely event that happened, the store could trace the product back to the customer. and not only ban him permanently but report him to police.

American Legion Highway is, technically, a parkway whose commercial neighbors are, in theory at least, supposed to help create a "green belt" along the road.

Ross said Silver Therapeutics would be more than happy to work with residents on a landscaping plan that could include a bike lane.

The company said it would begin one-on-one discussions with direct neighbors with specific concerns - such as one who asked about possibly putting in a fence between the shop's property and his residential complex. It plans to come back to the association with more detailed security and landscaping plans.

If those meetings go well, the company would then negotiate with the mayor's office for a "host agreement" that would specify how the company would meet neighborhood concerns. If it gets such an agreement, it would then go before the Zoning Board of Appeals for its approval at a public hearing - Bickerstaff said he would recuse himself from any such hearing. Then, finally, the company would apply to the state Cannabis Control Commission for a license.

Romance sonambulo (green, how I want you green)

a dispensary that would offer pot to both medicinal users and people who just want to get high.

A dispensary that would offer pot to both medicinal users and recreational pot consumers who want to get high and/or consume the product for medicinal reasons without having an MMJ card after showing their legal identification and procuring a product that MA voted to legalize.

Also, Mike Ross is serving up some serious silver foxiness in that photo (those glasses! Be still my heart!)...but it seems from this meeting that the concerns of the community were heard and taken into account.

Looking forward to see where this goes.

Also, Mike Ross is serving up some serious silver foxiness in that photo

Nevertheless, Danny Tanner could get it

Cybah, you are seriously underestimating how much I want to [expletive] Bob Saget, haha

Here's the requisite dialogue from "Half Baked" (which is maybe what Ross was alluding to with this look?):

What if Mr. Rogers was the greatest pot dealer that we've ever known and it was right in front of our eyes?

The graham cracker factory, hanging out with his friend Wynton Marsalis, those puppets in the Land of Make Believe? The idea of Fred Rogers trapping just makes me love him more.

(NOTA BENE: despite the entirety of this comment suggesting otherwise, I have not inhaled the pot grass into my lungs and became high).

looking every bit Enforcer Teddy Ruxpin in that pic

Anyone know why there are so

Anyone know why there are so many greenhouses and flower shops on this stretch of American Legion Highway? I wonder about it every time I run by.

Proximity to Emerald Necklace & other greenspace?

There has been some murmurs about turning American Legion into a greenway.

Irresponsible drag racing on the highway aside: I really like that area.

Proximity to cemeteries, too?

all of the cemeteries in the area

What address or corner on American Legion Highway?

If it's across from the Home for Little Wanderers, it's a short walk from Hyde Park Avenue with the frequent #32 bus, and also the #30 bus on Cummins Highway. The #14 runs down American Legion Highway.

Sorry, will add to story.

The walk to the 32 would not be onerous

But that doesn't mean the traffic concerns are trifling.

As someone who grew up around there off of American Legion

And used to take the 14 bus to school, I would say it is relatively non-existent. Try waiting for an hour thirty for the bus and giving up only to have it pass you by while between stops.

The white connected bros have

The white connected bros have really got their snouts out for this feeding frenzy.

If anyone is surprised by

If anyone is surprised by this I'd say they were naive. Only people with privilege are going to be able to open shops. And these same people need to advocate for the release of POC sitting in jail for doing the same thing.

My president is Black, my pot laws are green

I agree with this comment. The canna-business could be a real opportunity to bring economic equity to Black/POC Bay Staters. It absolutely needs to happen.

The elected folks from Dot/Mattapan/Roxbury are also dragging the process there to try to ensure that first licenses go to local minority owners.

...Who will inevitably cash out to national chains in a few years.

Great, now the lines at Simco

Great, now the lines at Simco's will be longer.

Former councilor Mike Ross is involved with multiple pot businesses all seem to have retired BPD members as security hires. Privilege is all about wealth !!

I think the hiring of retired BPD members is as much about public perception as anything. Every one of these shops gets questions about security at public meetings, and it looks a lot better when the security they are hiring are former officers.

Allowing black people to get in early on the weed wave seems like the only right thing to do. Seeing as how we've been being arrested for it for the last 40 years.

Stalling works: Roxbury Prep gives up on Roslindale high-school proposal
He had to hurry on his way, but he waved goodbye, saying don't you cry, I'll be back on Christmas Day!
Citizen complaint of the day: Fireworks season already?
A beam in thine own street
Power blinks out in East Boston, Roslindale
Mom was driving kid with loaded gun in his pants down Hyde Park Avenue, police say