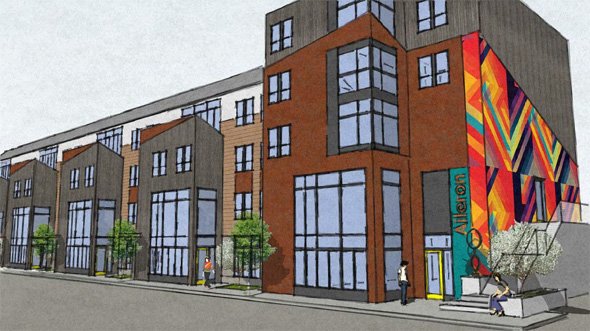 The Zoning Board of Appeal yesterday approved plans to convert a vacant lot on Condor Street between Brooks and Putnam into 33 apartments and 7 condos - and artist studios that open onto the street - in a two-building complex to be called Aileron, on vacant land long owned by the city.

Of the apartments, 24 will be rented as affordable, while 4 of the 7 condos will be sold that way as well, under the plans filed by the non-profit Neighborhood of Affordable Housing (NOAH).

Artists will have first dibs on 17 of the apartments, which will come with associated private studios. The ground floor of the building will have larger, shared studio space as well as a work bar/gallery and an artist workshop - NOAH says it hopes the spaces will become home to art classes, exhibits, concerts and other events year round. Also planned is a sculpture garden.

The larger of the two buildings will be five stories and will house all the apartments and artist studios, as well as a workbar/gallery and an artist workshop. The condos will be in the second, four-story building.

The project will have 35 parking spaces in a garage.

At the hearing, a NOAH official said the group hopes to work with the BPDA - which approved the project in March - on guidelines for selecting artists to rent the studio spaces.

Is someone able to explain how exactly they are able to rent out 24 of 33 of these apartments as 'affordable', and sell 4 of the 7 condos as affordable as well?
What type of subsidies are involved here? If NOAH is able to figure this out, why don't we see more of these types of projects being proposed?

NOAH is a non profit.

And the land was owned by the city, which has a program to hand over/sell vacant lots to developers such as NOAH that prioritize affordable housing. I should have included this in the original story, will do so now.

An additional question I have

An additional question I have is about the number of owner-occupied units. At below 50% isn't it difficult to get a loan, especially an FHA loan?

I also don't get the concept of condos being sold as affordable.

Yes, I believe it's true that under 50% owner-occupied (residential units) can cause problems with financing but four of seven of the condos will be "affordable" and presumably deed restricted, which often means that whomever buys them have to live in them (they do check). That would leave the three market-rate units as either rented out or owner-occupied. That they are putting the seven units in a separate building helps, I think. Plus, financing is not so tight that you can't find someone to give you a low down payment loan with only 3% down or so - Mass Housing has programs and I bet they could get it through.

I agree, I think the reason they are able to build cheaply is because the land is owned by the city. They will still have to buy it, I believe, but they will get a good deal if they agree to deed restrictions.

Owner-occupied, and there's a limit on how much they can be sold for based on the area median income, probably.

My partner is going through that process for buying a restricted house, and they do check. It's pretty arduous.

Restaurant on Border Street in East Boston wins approval for permanent patio - but without music
Two guys were tooling around East Boston with two guns loaded with a total of 28 rounds; nabbed because their car's window tinting was too dark, police say
This storm was not messing around
On Boston's smallest subway line, the maintenance delays are a bit shorter than a month
East Boston blinks out
Three-family in East Boston evacuated after exterior wall partially collapses