Return of the Murphy bed: Board approves South Boston building with a fold-away bed in one apartment

The Zoning Board of Appeal today approved a five-story, 19-unit apartment building at 142-144 Old Colony Ave., at D Street in South Boston, that will have 18 one-bedroom units and one studio small enough that it will come with a Murphy bed installed.

Some of the one-bedroom units are smaller than normally allowed by the city, some as small as 431 square feet, but Mahoney said the BPDA allowed that on condition Burns provide enough common space for the residents to use - in this case, a 700-square-food common room on the second floor.

The building will have 14 stacked parking spaces, he said.

The mayor's office and City Councilors Ed Flynn, Michael Flaherty and Annissa Essaibi-George supported the proposal. One resident said he was opposed due to the building's height. 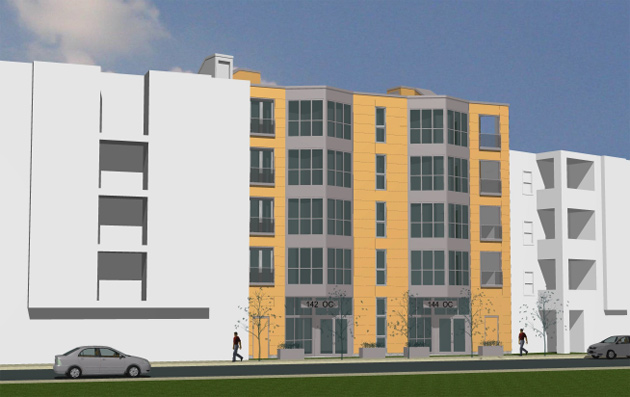 I am a meat Popsicle.

I have a sentimental thing

I have a sentimental thing for Murphy beds. I feel like if you have a Murphy bed, you should be a hard boiled shamus who smokes Pall Malls & says stuff like "Some gams!"

My feelings toward Murphy

My feelings toward Murphy Beds are very negative. I had never even heard of them before the day our moving company showed up to do a job and realized we had signed up to move this huge and very thing from East Boston to Cambridge. It was quite the struggle on both ends but we did eventually get it in, although now we have a policy of "no Murphy Beds ever".

The old fashioned ones

Scare me. I worry, what if it snaps up and traps me inside?

It’s not the first death reported in connection with the space-saving device, invented in San Francisco in 1900.

In 2005, two British sisters suffocated to death while on vacation in Spain, after an improperly installed Murphy bed with a wall-storage unit sprung on them, leaving them trapped for days, according to a report.

In 1982, a man in Los Angeles who had been drinking with a buddy died after he passed out inside a folded-up Murphy bed.

According to reports, a missing grandmother in Liverpool, England, was found mummified inside her Murphy bed, which had folded up while she was asleep.

Oh no! I was considering a

Oh no! I was considering a Murphy bed for my guest room, but perhaps not.

I got a similar thing that

I got a similar thing that looks like a pretty sturdy dresser, a bit above waist-height, that folds out into a queen - the mattress folds out on thirds. pretty nice, honestly, and none of the safety concerns.

It could be convenient

for when guests overstay their welcome.

450ish sqft is inline with some grandfathered micro units in south Boston, probably without the foldable living space pre-installed. Only qualm is there should be 4 affordable units to get it over 20%, instead of 16% at 3.

I lived in a studio that was

Much Bigger than my Dorm Room @ MIT

When I was an undergrad @ MIT I lived in a dorm room which was less than 100 sq ft. in a brand new [at the time] building. It came with a built-in armoire [with shelves and drawers and a tallish section where you could hang up a suit or a long coat], a desk, some wall shelves, a floor lamp and a small bed.

Several of these Suites were grouped into what was called an Entry [kind of a non-fraternity] which shared a large lounge [typically very nice view of the Charles]. In my era [all guys] there was a large apartment for a grad student who kept us in line. Later MIT cannibalized the grad student apartment to provide each Entry with a large kitchen and study / game rooms -- I think to attract female students to the dorm.

Finally the dorm with about 350 units had a number of common areas which provided various services such as self-service laundry, a good sized library [since cannibalized for other functions] a gym [very rudimentary in my day] and some undefined space in the basement [where we played a strange version of volleyball [bounces off the ceiling were in play].

No reason why Boston couldn't allow such a facility to be built for young adults [sort of immediate post-student years] who just needed a place to "hang their hats" while they worked 75 or so hours per week in tech or biotech. Such a plan housing say 5,000 to 10,000 in such facilities scattered about the business parts of the city would go a long way to easing the housing crunch.

Less fancy versions of such a facility [boarding or rooming houses] used to be located in all cities -- until do-gooders decided to ban them as being what? [undignified?] as opposed to what? [living on the street?].

The BPDA has permitted what

The BPDA has permitted what is essentially a "dorm for adults" next to Ink Block, at the corner of Herald St and Albany St. It's going to have full small furnished studio apartments, supplemented with some shared kitchens and larger common rooms. So people can live fully in their own units, or socialize with their neighbors in the communal spaces.

a prison cell that millennials and Yuppies alike are willing to spend big money on. I wish I thought of this ploy.

a boarding house, like the kind that have existed for centuries. But sure, let's blame it all on the Millenials.

Blame it on Boomers that modern boarding houses and even company housing is making a comeback.

This is their results of their continued leadership and policy.

Magoo was sleeping in one of these and it closed on Magoo. Magoo found himself stuck in the wall and couldn’t get out. Magoo

Here's hoping Magoo got out of that Murphy bed! That sounds really, really weird.

Magoo did get out. Thank you for your concern. There are a lot of meanies on here that don’t like Magoo. Magoo.

What's wrong with an L-frame

What's wrong with an L-frame futon bed that turns into a sofa during the day?

.... foodstuffs and so forth can congregate for social interaction.

South Boston triple deckers go up in flames in seven-alarm fire
Springfield teen charged with possession of a gun loaded with a lot of bullets in South Boston
Local company whose origins date to Edison's invention of the light bulb gets out of the light-bulb business
Convention-center hospital to stop accepting patients
Citizen complaint of the day: Stupid helicopters
Sullivan's at Castle Island re-opens, but, of course, there are some retrictions