East Boston casket factory goes up in flames; nearby residents ordered to evacuate 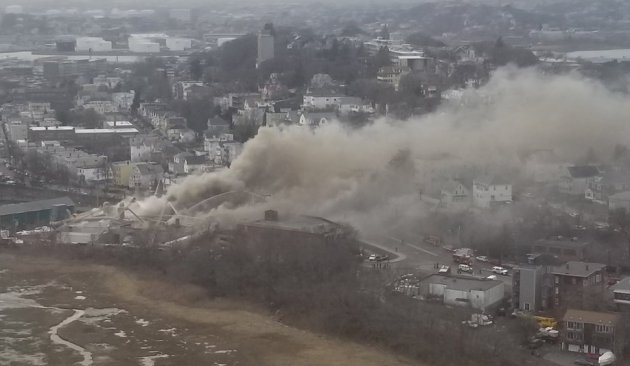 See it larger. Photo by Kim CV, landing at Logan shortly after 5 p.m.

Update, 10:25 p.m. Nearby residents being allowed to return to their homes.

A fire that erupted on the roof of the New England Casket Co., 1141 Bennington St. in East Boston shortly after 3 p.m. spread throughout the building and spewing toxic smoke that forced the evacuation of nearby residents as it went to nine alarms.

The fire also forced the shutdown of the adjacent Blue Line, so that firefighters could get on the tracks to aim water at the fire.

The initial roof fire eventually expanded throughout the building, spewing toxic smoke because of the varnishes and other chemicals used to build caskets.

At 5:20 p.m., fire officials struck an eighth alarm and ordered reverse-911 evacuation calls to nearby residents and asked for a dozen MBTA buses to be brought in to shelter evacuated residents. Evacuees were directed to the Guild School on Leyden Street.

Firefighters were initially ordered off the roof and then out of the building. As the eighth alarm was struck, firefighters were told to stay away from exterior walls in case they collapsed. 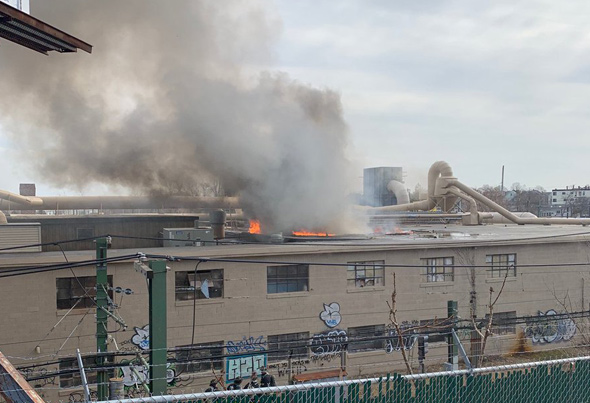 The building was originally built as a carhouse for the Boston, Revere Beach and Lynn Railroad.

Exterior fire operations being used at this time we have 6 Ladder pipes attacking the fire pic.twitter.com/4ahxZCMirZ

The view down the Blue Line tracks (Photo by theradrebe): 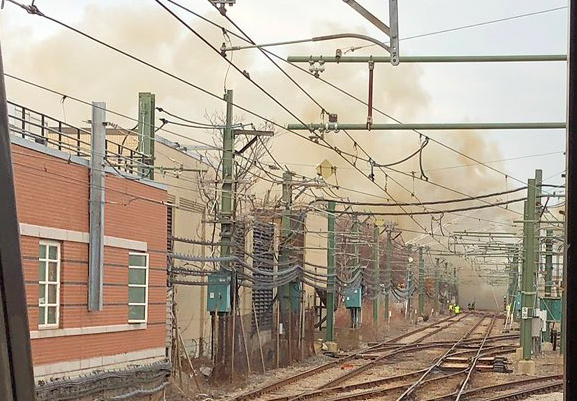 The fire not long after it was reported (photo by Melonie Veins): 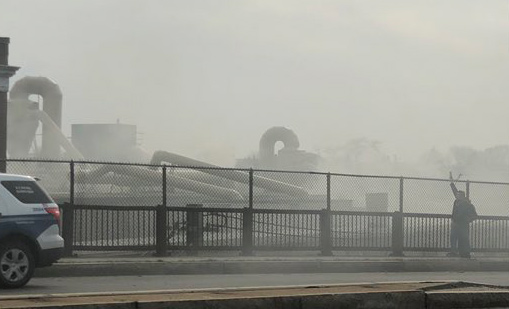 @universalhub Orient Heights Fire shots. First is from my house on the Belle Isle Marsh, the second is from the corner of Bennington & Saratoga. pic.twitter.com/rfW76UWK0B

4 hours into the fire pic.twitter.com/7TL66cdk0w

I hope the smoke doesn't have

I hope the smoke doesn't have people coffin

That would be the final nail

That would be the final nail for sure.

Backordered on caskets, but

Backordered on caskets, but if you're flexible, there's no wait for cremation services.

The place had sprinklers , I

The place had sprinklers , I find it odd that the sprinklers did not put the fire out from the beginning.
According to News reports ( the fire started from a dry wood furnace and spread to the rafters in ceiling above the sprinklers??? ) hmmmm

The fire apparently started on the roof and spread across the building that way.

No sprinklers in the world will help that. What they do help with is getting people out of the building alive.

Your "read more"link is broken :-)

That building was originally

That building was originally the repair shop of the Boston, Revere Beach, and Lynn narrow gauge railroad.

Was New England Casket the company that used to be on Cambridge St., near First St. in Cambridge?

No, that was National Casket.

No, that was National Casket.

They are evacuating Orient Heights neighborhood. My sister just called and said she and her neighbors are being ordered out.

The wind is blowing in this direction as there is a faint smell of smoke in the air, likely coming from this fire.

That's where it was coming from

I smelled it in Chelsea and Everett for a bit when the wind shifted.

From what I hear, the company was doing well recently. They offered good jobs that will probably never be coming back.

Thank the weather gods for

Thank the weather gods for this rain!

An homage to the benefits of...

Ha ha ha Love all these

Ha ha ha Love all these wicked funny jokesters!!
Thank god it was just a bunch of working class immigrants ! See you honkys Monday at the start up

The other "perjorative" H-word

"Haole", is a Hawaiian word that translates to "no breath." "Honky" has variant spellings ("honkie", "honkey").

I heard that there was one injury. I hope no one else suffered any.

Any news as to damage to the Blue Line tracks/overhead wires/electrical?

What happens to all of that water? Does it runoff directly into the adjoining marsh?

Earlier on - 7 or 8 alarms, it appeared as though more than half of the ladder trucks didn't have water - what was the water access problem?

How many people's jobs were lost? What are the company's plans?

What agency, if any, is monitoring air quality in the surrounding residential area? Is anyone affected adversely by the smoke in the neighborhood?

(Things I wish were reported, but never are because FIRE SMOKE HELO OVERSCENE PICS RATINGS)

The photos and info here are better than all of the commercial TV coverage combined - thanks Adam and Tweeters!

What happens to all of that water?

The water gets pumped into the sewers. Where the sewers go I do not know. Orient Heights on the Blue Line is closed until Monday hopefully.

Also not pumped, except onto the fire, and maybe out of basements after. The water flows down into the storm drains. Eventually to the Harbor. Sewers are a separate system.

A look at casket assembly

Adam, you shared this video a while back and it was fascinating to see how they make a fully wooden (no metal fasteners) casket for Jewish burials. Sad to think of those jobs lost, as well as the craftsmanship and knowledge from a three-generation family business.

This link was supposed to be included: https://www.universalhub.com/2015/east-boston-where-jewish-caskets-come

I wish the city would invest in the safety of the people of West Roxbury. We have a major underground gas line running through our neighborhood and the city cut the fire Chief position from the fire station on Washington Street. Tom Menino made this cut in service and now that the gas line is up and running, it’s time for Mayor Marty Walsh to fix this mistake and restore the position. He should probably put more fire engines here too. I guess we’ll wait until we have a situation like they had in Lawrence with their natural gas line before we do anything about it.