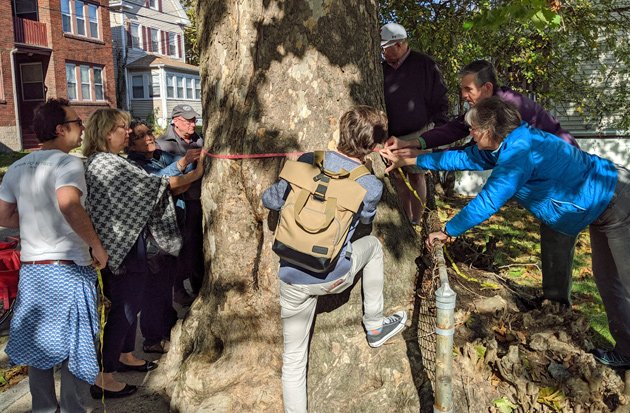 Taking the measure of the tree.

Residents who have long counted a giant sycamore tree on Poplar Street - at the corner with Sycamore Street - are trying to work with the owner of the two-family house there to save the tree if he follows through on his plans to replace the house with a triple decker.

At a gathering at the tree, which might have been planted in the 1870s or 1880s, residents said the tree, which mostly sits on the public sidewalk, but which has bulged over onto the homeowner's lot, and which likely has extensive roots under its lawn, provides all the benefits trees are good for - cooling shade, taking in carbon dioxide and just being something nice to look at. And, Judy Blanchard of Hawthorne Street said, after a trip, the tree "tells me that I'm home."

In a meeting and correspondence with the new West Village Neighborhood Association, the attorney for the owner, who now lives in Canton, says he is willing to work with neighbors - whose support would help him get several variances needed to build a triple decker in a two-family zone - to save the tree, including hiring an arborist to watch over it during construction.

David Meshoulam, co-founder of Speak for the Trees, Boston, urged residents to get that in writing - and to consider hiring their own, independent arborist. Meshoulam said particular concerns would be that the initial plans call for the new building to be about 20 feet closer to Poplar than the current one, which could affect the tree's roots, and that any heavy construction equipment rolling on the Poplar Street side of the lot could also harm the roots by compacting the roots. He also suggested building a temporary box around the tree to protect it from any errant machinery.

Meshoulam said the tree appears to be in good shape.

As part of the get-together, Meshoulam entered the tree into an online inventory of Boston's public trees - after he and several residents used tape measures to find out just how large the tree's trunk is - a diameter of 48 inches - he said it's the fourth largest of the roughly 5,000 trees the group has so far surveyed in Boston and the largest sycamore.

Based on its diameter, he said the tree likely removes some 1,700 pounds of carbon dioxide and 5 pounds of particulate matter from the air every year.

Meshoulam said the tree is likely a sycamore variant known as a London Planetree, which was popular for street plantings in the late 1800s, when Roslindale was morphing from largely farm land to the residential area it is today. He said Sycamore Street was originally called Mount Vernon Street, but that its name was changed sometime near the turn of the 20th century - likely because of the tree in question.

Among the neighbors who attended the rally was at-large City Councilor Michelle Wu, who lives around the corner from the tree. 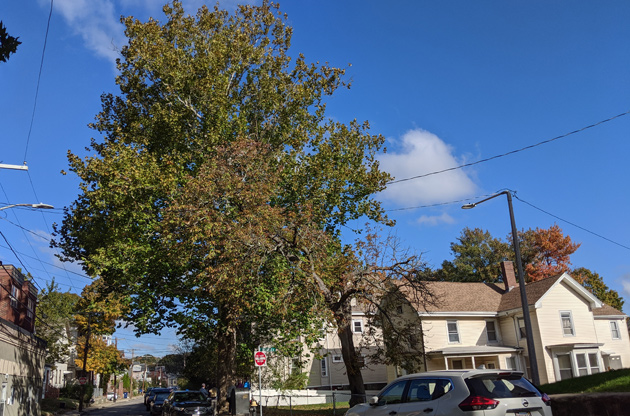 If it's on the sidewalk, does

If it's on the sidewalk, does that mean the city owns it? I know that some cities and towns plant and trim sidewalk trees.

If so, can the city prevent someone from damaging its roots in private property?

I assume the same principle of overhanging limbs would apply. The tree is primarily on city property, but any portion on private property can be removed by said property owner. After all it's on THEIR property.

Ask City, Adams Village Friends of Adams St Library saved Oak tree that Oakton At
is named after. There is technology and the will to do this.

Save our Sycamore Tree

Adam, great write up; thank you for covering this event. Other interested readers; please follow our activities on Facebook "Keep Roslindale Quirky" or, if you live in this part of Roslindale then join the West Village Neighborhood Association here: https://roslindalewvna.weebly.com/

No Threat to the Tree

So after reading this, it seems like there's no actual threat to the tree. It's basically resolved if the developer has already agreed to do what they want. This is also a city tree so it's not like a developer or anyone can even touch the thing. Good on the residents for organizing anyway, though on a Monday morning when only people not working or who can take time off can be there...

I went to the online inventory

link and found no information about two very large trees on Talbot Ave alongside Harambee Park (formerly Franklin Field). They are probably two of the biggest trees beside a sidewalk I have seen in Boston. Does anyone here know anything about them?

.... certain trees have protected status. Wish this tree was protected by law.

With "Walsh the builder" on the case !

Private land ownership laws, it’s one of the most important laws in our short history.

But I also hope the land owner does the right thing.

If there is a rally

Gather round Roztonians... We now know how Sycamore street got it's name, but let me tell you of a different tale of a group of families without pigment and poor spelling skills....