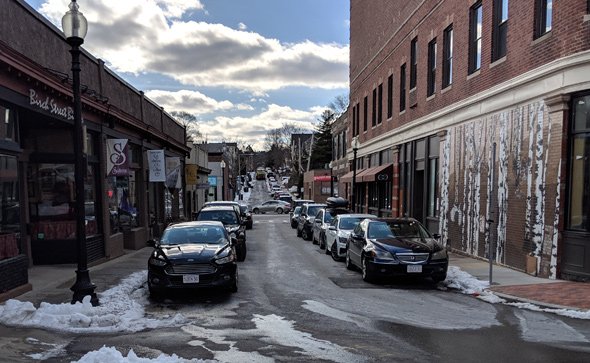 Merritt Chase was awarded the design work by A Better City, a citywide business group that will work with city planners, Roslindale Village Main Streets and Birch Street merchants on a plan to permanently close the tiny, narrow street to traffic and to make it a new place for people to congregate on foot, with tables, benches and room for pushcarts.

The firm's initial plans will be for a "semi-permanent" pedestrian space, but the ultimate goal is to shut this section of Birch to traffic permanently within two years.

The proposal would link an existing dining area used by several restaurants along Birch and Corinth with an existing mini-park where Birch and Belgrade meet - not far from the start of a proposed pedestrian/bike path from Roslindale Square through the Arboretum to Forest Hills.

According to Roslindale Village Main Street, Birch Street was shut to traffic seven times last year for various events - including an "Open Birch" day to highlight the potential for a permanent plaza there.

But where will I park my car when I go to Sophia's?

Oh, there are huge commuter rail and municipal parking lots right across the street? Build it!

That would be fantastic!

That would be fantastic!

Sounds great. Every neighborhood should have pedestrian only areas. But why in the world should this take two years? Get the cars out of their and put up some bollards. It should take no more than 2 days.

Sadly this is extremelt accurate, it's comical really. It's classic big city graft in Boston all the time.

EVERYONE REALLY TRULY DOES HAVE TO GET PAID.....

No matter how small the job. Multiple hands have to dip into the municipal jar.

Take the time to do it right

Blocking off the street is the easy part. What goes in that space is what will decide if this is a success. Let the planners work this out so that the result is a treasure, not just bland, underutilized space.

Also the location. You can

Also the location. You can build a plaza as nice as you want, but if it's in a dead area, nobody's going to use it.

The Birch Street Bistro will essentially have outdoor space in the front and the back. I think it is great. I think it will make the area even more attractive people who want to eat out or just go somewhere nice

Why aren't there any

Why aren't there any pedestrians in the photo?

Yes, building an amenity will attract more people. But usually there's at least a little existing demand for something to demonstrate it would work.

Have you been outside today?

As mentioned in the caption, I took the photo today. Kinda cold and windy out there. But that doesn't mean you can't do anything there - there's an annual holiday market in December that focuses on the street.

The RVMS link has photos from past outdoor events on the street.

If people show up for street

But if it's pedestrianized permanently, there are going to be plenty of 40 degree sunny days which would be a ghost town.

It already is, by your reckoning, so what difference would it make? Never mind that somehow, enough people manage to walk down that street to keep the wine shop, the cheese shop and the other places on the street open. Maybe they all just saw me whipping out my phone and ducked for cover.

If it's a dead zone now

How will closing it to traffic make it deader?

Seriously, that block of the road serves no transportation purpose. The odd person who needs to get to that stretch of Belgrade from that stretch of Corinth can go up to Village Market and cut through the parking lot. The only loss is 9 parking spots, and there are parking lots close by to make up for the loss.

Because it won't have the

Because it won't have the traffic.

It looks like a short stub between nowhere and nowhere with eight parking spaces.

If you don't get one of those eight spaces, you are walking in there anyway.

This might set the bar for curmudgeon trolling. There’s nobody in the picture taken mid-day Thursday in the dead of winter, albeit an easy one. For what it’s worth I estimate I’ve walked up or down that little street a few hundred times in the last ten years. I’ve parked on it maybe a dozen times actually driven it for a reason once; when I remembered I forgot something and used it to turn back towards home.

If only I were that smart/devious

Alas, the truth is: I was almost finished writing this thing up when I realized the story could do with a photo, and, hey, I live in Roslindale (granted, at the other end of the neighborhood, so we're talking almost two miles), so I drove down and took what I thought would be a picture to show how short the street in question is. And then I went to the Blue Star, ordered some lunch and posted the now photo-enhanced story while sipping some coffee.

So, yeah, I guess I need to work on my trolling (or maybe my subconscious is doing it for me).

Ha, I re-read my comment and now “curmudgeon trolling” may become my pastime. I was actually calling that person a curmudgeon and a troll but it’s way funnier to imagine you were trolling curmudgeons with a nice photo..alarmingly bereft of humanity.

I wouldn't call it the dead

I wouldn't call it the dead of winter. It was 40 and sunny. In fact, I saw plenty of pedestrians as I walked around Boston and Cambridge mid-day. I'd approve of a pedestrian plaza in any of those places.

There isn't anyone driving

There isn't anyone driving either.

There is someone driving in

There is someone driving in the photo.

And to be clear, I'm not some car guy. I don't even have a car. I just don't approve of pedestrian plazas that don't get used, and make a place deader than it was (even if it was somewhat dead to begin with).

Not on the street in question

Not on the street in question

Can’t think of a better place than between restaurants and a brewery. Hopefully a section will allow brewery patrons some outdoor seating. Would help ensure the success of that business.

It's been said before by

It's been said before by others here, but Roslindale really is leading the way right now in creating a livable, vibrant neighborhood with the bus lane, bike path, no-parking buildings, and now this. Great to see the community behind this stuff. I hope City Hall is watching this and emulates it elsewhere.

Do all of these businesses have loading zones elsewhere?

This is often the main obstacle to totally closing a street (for instance, Washington Street in Downtown Crossing)

There's a short walkway from the Village Market parking lot to the Birch Street courtyard. I'm not picturing truck drivers wanting to try to supply stores right from Birch because the street is really, really narrow, and parking is allowed on both sides, so sometimes it's difficult to just get a car down there, never mind a box truck.

There are back entrances

There is an alleyway behind, which is known for being the home of Sophia's Grotto and the parking lot for the Village Market. It would be doable to deliver using that area.

I'm certain they will need the buy in of the abutters. If this is an issue, the idea will die most likely.

The bottom left of the picture above shows an alley departing from said Village Market parking lot, in the direction of Belgrade. It is my understanding that delivery trucks to that cluster of businesses on Birch Street typically pull up close to the patio between Sofia's Grotto and Birch Street Bistro, and then depart the parking lot through that alley so that they don't have to turn around in the parking lot. I would expect that alley would be left open to traffic and exit to Belgrade for those purposes.

Also, having been by there recently, I noticed that a coffee shop seems soon to open up on the corner of Corinth and Belgrade. A Birch Street plaza seems like a place a lot of people might have cause to sit and enjoy the fresh air.

Abutters are generally already on board

The folks organizing this have already had quite a few discussions with abutters. To my knowledge, they are almost entirely (if not 100%) on board.

What tha? Big blow brings down trees and wires, floods streets, but at least gives us a nice rainbow
DNA evidence leads police to Roslindale man, now charged with 2013 rape in the Arboretum, 2007 rape in Mattapan
Citizen complaint of the day: Garbage hermeneutics in Roslindale Sqaure
Roslindale Substation formally re-opens as co-working space/beer hall with a pop-up bookshop
Roslindale man missing, possibly in Berkshires forest
On second try, with some parking added, plan to replace Roslindale repair garage with condos, stores is approved