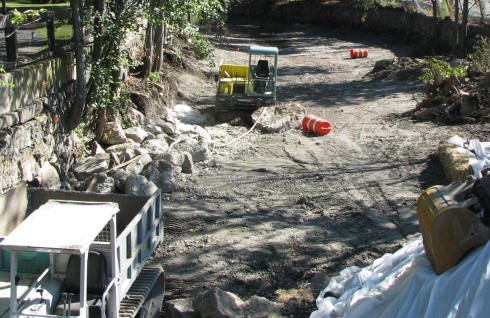 When the Mother Brook was diverted in 2007 for a cleanup.

A federal appeals court this week ruled the corporation that owns the Shaw's in Hyde Park is due a refund of the more than $3.5 million it paid to remove PCBs from the Mother Brook after a jury determined neither the supermarket nor its manufacturing predecessor on the site had anything to do with the chemical winding up in sediment in the brook.

The US Court of Appeals for the First Circuit in Boston affirmed a lower-court verdict that what is now a subsidiary of a Swiss company is responsible for roughly 75% of the $13-million cleanup of the brook - and that a Swedish company that manufactured centrifuges in the 1970s in a plant off Hyde Park Avenue owes most of the rest. The court also upheld a lower-court decision that the Boston Renaissance Charter School, which bought the old centrifuge factory to convert into classrooms owes about $130,000 for the work.

The legal wrangling over the cleanup took longer than the remediation itself and kept expanding to involve more companies and property owners. Cleanup work that began in 2007 was finished in 2009; the issues addressed by the appellate judges this week stem from a series of legal actions dating to 2010.

The Mother Brook, which is the oldest canal in North America - created in 1639 to divert water from the Charles to the Neponset to power a mill in Dedham - had long been polluted by the discharge from the factories that started to line its banks in the 1800s.

In November, 2007, the state Department of Environmental Protection notified both Thomas & Betts, now owned by Swiss company ABB, and what is now Albertsons, which owns the Shaw's on Hyde Park Avenue, that they were "potentially responsible parties" for PCBs found in the brook.

The news was no surprise to Thomas & Betts, which had learned about potential PCB contamination near its plant in 2000, and which had already begun working to clean up its property. It had also won state approval for a proposal to drain the Mother Brook and remove contaminated sediments from its factory to just before the brook entered the Neponset River on the other side of what is now the Blake Estates senior-housing complex off Hyde Park Avenue. Albertsons - at the time called New Albertson's - agreed to cooperate with Thomas & Betts on the brook cleanup and to share the costs.

That these two companies were pegged by the state stems from the two site's long industrial histories. The first factory at 98 Business St. (familiar to Hyde Park residents today as the large building with the peeling white, yellow and blue paint), dated to the 1850s. In 1945, L.E. Mason Co. began making aluminum and zinc components for electrical wiring. Thomas & Betts bought the plant in 1999, then closed it just three years later. The Shaw's, meanwhile, sits on what was once part of the Allis Chalmers electrical-components complex. Shaw's lease with the property's owner required it to pay for any potential cleanup work.

Mother Brook in Hyde Park in 1890. The present Shaw's would be on the land with the "31" on it; the Thomas & Betts plant at the "30" (image from the BPL Norman Leventhal Map Center): 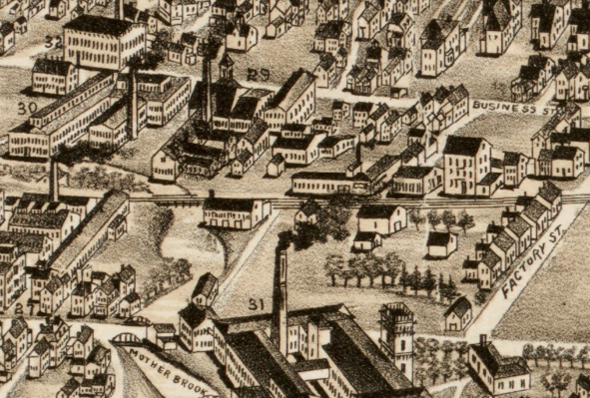 Shaw's owner paid Thomas & Betts nearly $3 million towards the cleanup work, then stopped. Thomas & Betts sued. New Albertson's counter-sued. Thomas & Betts added additional parties to its suit, including the Boston Renaissance Charter School, which had bought an old centrifuge plant across the Mother Brook from the back of the Shaw's in 2008 to convert into its current home.

The former Thomas & Betts plant and the Mother Brook: 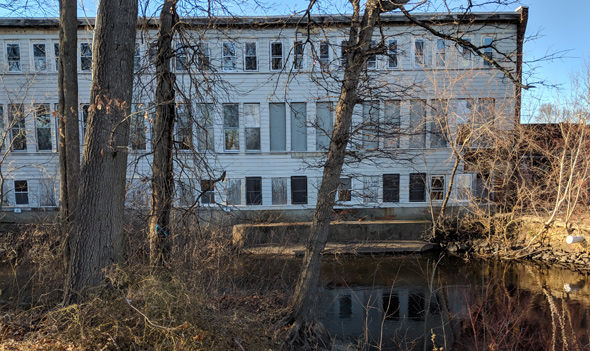 In 2015, a federal jury sided with Shaw's owner, and determined that Thomas & Betts was 75% responsible for the PCBs in the brook, with Alfa Laval, a Swedish company that had owned the old centrifuge plant, responsible for 14% of the pollution, and the school for 1%.

Thomas & Betts appealed the verdict and the determination of costs, including legal fees claimed by Shaw's owner. Alfa Laval and the charter school filed their own appeals.

Thomas & Betts lost on all counts this week in the appeals-court ruling, failing to convince the court it had gotten an unfair trial or that the verdicts and monetary amounts were wrong.

Also losing: The charter school, which argued it should not be assessed anything for pollution that had occurred long before it bought the property. The appeals court said that, in fact, some of the chemical continued to drain into the brook from contaminated soil even after the school acquired the property, making it at least responsible enough for a 1% assessment, or roughly $130,000.

The appellate judges also ruled against Alfa Laval, which had bought the plant from from another company, American Tool & Machine Co., in 1968.

Alfa Laval, which just gave up manufacturing centrifuges in Hyde Park in the 1970s, argued that while American Tool & Machine stored and used PCBs at the site, it never did.

But the judges sided with Thomas & Betts, which produced evidence that when Alfa Laval took over from American Tool & Machine, it kept using that company's same exact manufacturing processes, including hiring many of its workers. In fact, all of Alfa Laval's initial workforce was hired from the previous owner, and they kept using the same materials to build their centrifuges. Based on that, a sensible jury could rule that Alfa Laval continued using PCBs after it took over, the court ruled. Plus:

Thomas & Betts introduced aerial photographs of the site that showed that Alfa Laval demolished buildings, engaged in construction, graded an area to build a parking lot, and otherwise disturbed the soil on the property where significant PCB concentrations were later found.

Thomas & Betts can ask for the entire Court of Appeals in Boston to review the three-judge ruling, or just go straight to the Supreme Court with an appeal.

The Mother Brook and the back of the Shaw's: 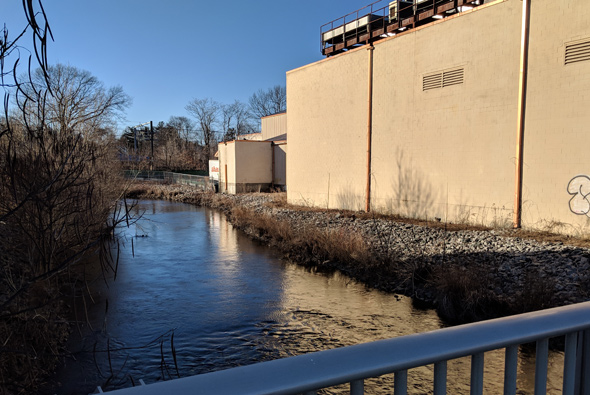 Very interesting story (though dry for most laypeople). Thank you for your in-depth reporting. Whenever I read long articles like this, I wonder: how long does it take you to compile, edit, and publish stories like this? I can tell a lot of time and thought went into this. I can’t afford to donate to your website, but I sure as hell recommend word of mouth for this site as a local news source. Great job.

Thanks for the kind words!

This one took me longer than most stories I post, I admit - partly because it's a really convoluted legal story (I had to create an outline to try to keep track of everything; most stories just aren't that complex) and partly because it gets into the history of industry in that area and that's a really interesting thing to read about, so I spent probably more time than I needed to reading up on, oh, Allis Chalmers, back when that part of Hyde Park was pretty much all industrial. I didn't keep track of just how long I spent, but, yes, it was more time than usual (for example, the decision actually came down two or three days ago, and I had to wait until today to have enough time just to read it).

Adam,
Thank you for all you do for Boston and surroundings!

Not an unusual tangle of historic pollution and current land use/development, but it is certainly a very complicated one in both space and time. I'm amazed that the court managed to sort it out, and impressed that you are able to explain it so clearly - both the litigation and the historical layers of it.

UHub was mentioned on WBZ late last week. This site is well known. :)

Thanks for the research. I had no idea of the history of Mother Brook and its age and that it was man-made. The court decision is complicated but you explained it well.

"Those damn Swiss and Swedish immigrants!"

More precisely, irresponsible foreign corporations come and dump their shit here in our country for their own profit.

(And, actually, thanks, Adam. for this great report. You regularly demonstrate a fine journalist credential. Thumbs up!)

Swiss and Swedish (and German - Siemens was named in one of the suits) bought up American companies that had been dumping stuff for decades, then shut them down.

And thanks, also, for the kind words.

That end of the avenue has

That end of the avenue has some interesting history, leading up to the old rail yards, Westinghouse , and then of course home of the Mumbles guy . The dreaded Stop and Shop warehouse has evolved, still gets rail cars to be broken down, cant seem to exterminate that baby .

And it looks like ground has finally broken on the new factory complex down by where the rail yard used to be, just past the Sprague Street bridge.

There was one of the last

There was one of the last beer only no hard liquor joints down that way too, I think he kept the Old Thompson under the bar in a peanut butter jar.

There's family still living in Menino's father's house, one block from where Allis Chambers was.

The things you notice while out and about on foot.

They made some big ass

They made some big ass centrifuges or separators there. Poor Eddie is on the hook too, that aint right!

Thank you for such an interesting, clearly-written article, Adam!

Thank you for your great work. Would you consider another story about how the cleanup was supposed to restore the Mother Brook by - at the very least - planting trees that were cut down during the remediation. These remediation companies use all the money to "remediate" but never actually restore the property as they are required. The money goes into their overhead and costs...and even if it was initially underestimated...we are left with a barren landscape...and not what the law requires in terms of remediation.

I always wondered why I never saw any fish when looking down into Mother Brook from the Hyde Park Avenue bridge!

So if I buy a gun - legally - and it's later learned that the same gun was used in a crime, do I go to jail? That's exactly what happens in these environmental cases. The school didn't do anything wrong, they just bought property.

Search for "charter school" in the decision and you'll see that the pollution continued after they bought the property. No, they weren't actively pouring PCBs into the ground, but, yes, laws related to pollution are different than laws related to guns.