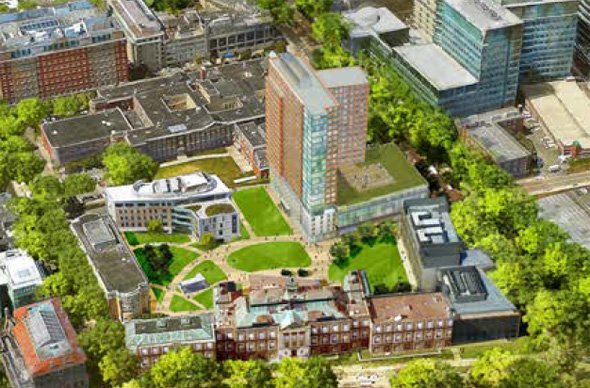 Rendering of proposed Simmons tower, next to Boston Latin School.

Simmons University has filed plans with the BPDA to shut down its current six-acre residential campus in the Longwood Medical Area and tear down its science building and to replace both with a single, 21-story "Living and Learning Center" that would house 1,100 dorm rooms, classroom and office space and athletic facilities.

In a revised "institutional master plan" filed this week, Simmons does not specify what it would do with the current residential campus after all the students move into the new building on the academic campus a couple blocks away off Avenue Louis Pasteur and the Fenway. However, Simmons says the changes would mean only a modest increase in its total number of dorm rooms, so presumably it would no longer need six acres of space in one of the most expensive and built up areas of the city.

These projects are not intended to provide for a future increase in undergraduate enrollment, but rather to ensure Simmons campus is equipped to provide an exceptional living and learning environment for the same number of undergraduates now and into the future. ...

With the Projects, all on-campus student residents will be consolidated onto what is now referred to as the Academic Campus. The number of on-campus beds is expected to increase from 1,036 to approximately 1,100. Student enrollment and the number of faculty/staff members are not anticipated to appreciably change.

Also in the university's "One Simmons" plan are renovations to the existing Main College Building and Lefavour Hall, which will include ending leases there now held by Children's Hospital and Brigham and Women's Hospital.

That plan calls for a single campus where students and professors can interact on a more frequent basis; Simmons says that in addition to moving all of its programs to a single, more compact campus, the current 1960s-era, brutalist science building has to go because it just cant't support the sort of "outside-the-classroom meeting spaces and technology" that current schools and students demand.

Research confirms that in a marketplace where all universities and colleges are competing for the best students, the two key decision criteria for such students are: an academically robust program with good lifetime outcomes, particularly job opportunities; and a place where they can envision enjoying spending four years of their lives. The One Simmons concept provides state-of-the-art athletics, dining, science, and residences to support the University’s mission and to attract and retain talent.

Simmons students’ feedback, and national research confirms, that student-housing preferences have changed. In order to keep pace, Simmons needs to transform from its classic, traditional residential campus to the type of modern and welcoming living environment that prospective students are looking for when they select a college. Current residence halls are aged, with significant deferred maintenance that threatens their utility.

1) Sell the Latin lot to the top bidder in the red hot Longwood area for a huge amount of money.
2) Build a new school across the street from BPD on Tremont St with some of that money. Sure, the real estate won't cover all the costs but it's an old, rundown building with terrible bus access.

Perhaps some network effects by being adjacent to the other two schools right there.

It's a bit late for that land across from the BPD. The developers who won the rights to put a giant complex there finally say they actually have financing in hand and won final BPDA approval a month or so ago to break ground.

I'll believe it when I see it.

How about that huge parking lot behind Wentworth? Surely Wentworth will be appearing in a Globe story about a small college going belly up soon right?

It's taken a while, but it looks like its happening.

Do you mean on Parcel 3? Development is already approved for that parcel.

An even more modest proposal

Have Latin sell just their large parking lot off Ave Louis Pasteur, with the stipulation that the new owners would have to install enough underground parking to replace all the old surface parking. It's win-win-win. Latin (well the city) gets millions for the under-utilized land, Latin teachers still have a place to park, and a new taxable building goes up on the land.

The only buildable parking lot on Ave LP is the Blackfan parking across the street towards Fenway. Is that BPS property?

The little lot next to the school and behind the school can only be built on with my original plan.

It's only 50' across. I don't think you can put in an underground parking garage large enough to justify the cost of construction in a space that small.

why save all the parking?

It's a transit rich area and lots of paths too. Why require saving all the parking? If the people using the parking lots actually paid the true cost of what the parking is worth, maybe they would find another way anyway.

Ever try to take a bus to a doctor's appointment in Longwood when the Red Sox are playing? I have and walking is quicker.

There are no 4:30 am trains for teachers living in areas where they can afford to buy a house.

The school is right on the Orange Line, and has huge parking lots taking up valuable developable land. Sell these and use the money to properly endow the college.

Failure of a Library and Information Science Program at Simmons.

It would be better having an affordable Library and Information Studies Program with focus on Public Libraries/School Libraries at University of Massachusetts Boston or at Northeastern University. More and better Scholarships for such a Library and Information Studies Program than the too limited scholarships for the out of reach expensive Program at Simmons. And the Program at Simmons is lacking in academic studies of Information Policies using the Case Method https://en.wikipedia.org/wiki/Case_method

The style of teaching in Library and Information Science at Simmons fails to imbue many students with the sense of examining, questioning, developing more up to date approaches to Information Policies, Legislation, Information Practices. Consider Digital Restrictions Management https://www.defectivebydesign.org/

I'm a recent Simmons alum and

I'm a recent Simmons alum and I LOVED having a separate residence campus. Yes, it's older, but the quad is beautiful and I felt like I was "going home" after a long day of class and work at the MCB.

Very sad to hear this news and not really sure why they're doing this instead of just building a bigger science center. No need for a giant ugly tower.

Shot in the dark

This is just a shot in the dark, but maybe they could finance the tower through selling six acres of land in the Fenway.

Squish everything and everybody...

Into one gigantic tower. Is that really how are children want to learn today? Sounds incredibly dehumanizing to me.

A precedent, in Pittsburgh

but can we get some architecture as cool as this?