South Boston restaurant could make way for, no, not condos, but biotech 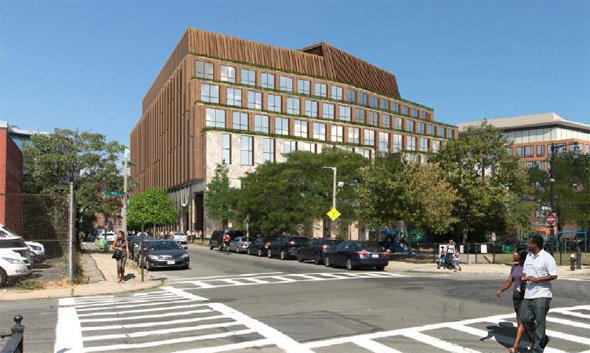 Two developers want to build a six-story life-sciences building on the West 3rd Street parcel now occupied by the Coppersmith restaurant, the one with the food truck inside.

Alexandria Real Estate Equities, which owns a number of Kendall Square buildings with biotech tenants, is partnering with local real-estate investment firm Anchor Line Partners on the proposal, to be known as 99 A St. The two recently alerted the BPDA they plan to file detailed plans for a 95-foot-tall, 210,000-square foot building by the end of March.

The two say they would tear down the warehouse in which Coppersmith now operates, along with other structures on the parcel, which runs between West 2nd and West 3rd streets, and A Street and the South Boston Haul Road. The two companies say they will ask the city for permission to discontinue a dead end that now juts into the property from Bolton Street.

Through the Project, the Proponent would make a substantial investment to reposition and revitalize the Project Site away from obsolete trades to serving 21st-century life sciences tenants, with an attractive, state-of-the-art facility.

The building would have roughly 75 parking spaces; the developers point to the Broadway Red Line stop three blocks away - and note how convenient that will be for people to get to and from the Kendall Square biotech area.

The developers say their building might have some ground-floor retail use.

This project will not engender anywhere near the opposition that new housing does in Southie. And yet, this business would almost certainly result in more daily car trips to and from than new housing would. Some of these workers will undoubtedly want to live close to work and just add more pressure to the Southie housing market. And yet, this will likely sail through with nary a peep because it doesn't raise NIMBY ire.

You make yourself sound stupid

Who are the Nimby’s you are talking about? Coppersmith is in an industrial area. Is Gillette complaining? Is Pasek Corp complaining? People in the neighborhoods of South Boston love to see dense development in the Lower End. Keep the new people out of the neighborhood.

Not good enough. They're asking for a spot zoning variance and seem to have been pre-approved by the crooked BRA behind closed doors

They should be required to provide space for Coppersmiths or another restaurant once completed.

Any commercial / high rise residential around Broadway should meet that requirement.

RIP to the PORT 45 Condo Values

CLASSIC! "Sweeping views. luxury this, luxury that"....but they forgot to mention the 6 story wall that they will have to look at in a few years.

Also, who knows how big the Amrheins development will be. They may be sandwiched with nothing but glass on both sides.

Has that ever happened in recent memory? Property values going down after dilapidated abutting buildings are rebuilt? Source?

3+ years of continuous construction on both sides

With the views to the East being impaired a by a 6 story building, and potentially to the west, at least for the first 2 floors. The dilapidated buildings you mention are only partially run down. Coppersmiths is larger than you think and the office space adjacent has been available for lease for over a year, so clearly not in that bad of shape. The brick building on the amrheins parcel isn't great but was never an issue. Chances are the Amrheins development is at least 3 stories, if not 4.

Source you ask? How about some common sense.

What is your source for it affecting property values and where around here has that been a problem? That was my question and you didn't answer it.

Common sense says that the real estate market is so hot right now that it's a non-issue.

and I'm telling you the same has been happening down the Seaport. You don't have to be a half a genius to see that the BRA or BPDA approved developments on all the dilapidated vacant lots on the Seaport closer to Summer Street. When all those buildings were sold or occupied then the lots closer to the waterfront were developed blocking the water views from the first developments. Now they're building right on the water ie: the old Atlantic Beer Garden and Whiskey Priest sites blocking even more water-views.
I know, my office looks into the back of some dudes leather office chair when I used to be able to see the sun rise.
Investors who jumped in first are now looking at buildings not water.

What about the property values?

Yet it still hasn't affected the property values, which was your claim. You just don't like it.

Are you posting this from California?

We shouldn't fear Manhattanization. We should fear Californication.

I'm looking out my window at

I'm looking out my window at the Port 45, and only the 4rth floor sits above the existing building right next to it. Most of the units open up into an interior courtyard. If the current old building attached to Coppersmith is expanded 2 floors, it will probably make the view from the 3rd and 4rth floor of Port 45 look that much better, because currently, they look at the run down rooftop of the old building.

With skyrocketing rents in Kendall, we've seen a recent push for new long-term leases in the face of the looming competition from the proposed 1.6 million square foot Exchange Place redevelopment of the Flower Exchange site in the SE for office, lab, biotech, and biomed with a 1.1 acre publicly accessible and programed open space.

This "urban campus" is designed to create a biotech, arts, business, foodie, and community setting that will be both a day and evening go to venue and offer Boston as an alternative to Kendall (nearest neighbor is the biolab and the expanding BU/BMC medical campus).

I'm all for it

I live near there and it's kind of a ghost town during the day. A few more offices might bring business to the restaurants and cafes around lunch time.

Gillette is right there, as is State Street. You're a block from West Broadway which is never a ghost town.

And yet, it's hard to find

And yet, it's hard to find grab and go lunch options. Doughboy or 35 dollars at Warden Hall :(

There are 2 sweetgreens, Whole Foods, Foodies, Rondos, Subway, and multiple pizza places all within a .7 mile walk.

starting to feel like a bubble is forming in the Biotech real estate market....such specific requirements fulfilled in a building at a very high cost for all the infrastructure....can't rent this to a traditional office tenant and cover your costs if they can't find a pharma tenant! Only time will tell...

They don't build the lab specific infrastructure until they have a lease signed and understand exactly what is needed for said infrastructure. "Biotech" is a very vague term for what goes on in a building. Every company has different needs and requirements. Also, most biotech buildings are more office space than lab space any ways, it's very easy to go from Lab > Office. Not vice versa though.

Lab buildings are also 100% outdoor air HVAC which requires sizing of infrastructure to support that, so they are very much different than an office space building.