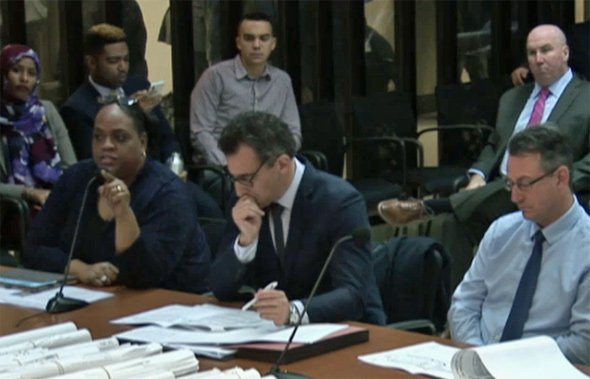 Cabral makes a point at hearing as Ross listens. Linskey sits behind them.

The Zoning Board of Appeals this week approved what would be Boston's first recreational pot shop, in the old Hilton Tent City building on Friend Street, near North Station.

Ascend Wellness still needs to win approve from the state Cannabis Control Commission - and to do extensive renovation work at the old five-story building - before it can open. Ascend attorney, and former City Councilor, Mike Ross estimated an actual opening is still six to nine months away. If it does win approval to open, it would be the only pot facility for a half-mile around, under a Boston ordinance aimed to limiting the concentration of marijuana facilities in the city.

At the hearing, Ross and Ascend CEO, and former Suffolk County Sheriff, Andrea Cabral, said they've done extensive planning to counter the sort of endless lines that have plagued the state's first pot shops in Leicester, Northampton and Salem, although they added they're not expecting to see anything like that because by the time the Ascend shop opens, some of the novelty will have worn off.

The company will encourage people to order online, and one quarter of the first floor will be set aside for people to wait so that they don't clog up the street, they said. Customers will be encouraged to take the T, rather than drive, Cabral said, adding she's even looking at possibly handing out coupons for other nearby shops to hand out should a line develop to encourage people to enjoy the area's other amenities and come back in awhile.

Ross said the company is looking at serving 200 to 300 customers a day. The shop will normally be open 9 a.m. to 8 p.m., seven days a week, but Ross said the company would gladly open later or shut earlier if there's some huge event at the nearby Boston Garden that could mean large crowds.

Although the building has five stories, Ascend will initially use just the basement and first and second floors for product storage and sales space. Ross said the company is still trying to figure out what to do with the other three floors - one possibility is a floor dedicated to medical-marijuana sales - but that Ascend would not rent out the space to anybody else.

Ross said that all of the products will be grown, baked or infused in a company plant in Athol and then delivered to Friend Street in plain wrappers with bar codes, which workers will get after customers have agreed with sales people on what to buy. In addition to tokable flower, the store would also carry edible products; Cabral said the exact menu is still being drawn up.

Customers will be able to see, but not touch, some products in locked display cases. Ross added the company is looking at adding sort of pot cachet balls that would let customers get a whiff of different types of weed - that would be placed back into locked containers after they've made a decision.

In addition to Ross and Cabral, well known for their local political ties, the company has hired former BPD Superintendent-in-Chief Dan Linskey as its security consultant.

The zoning board granted its approval for a five-year period, to match the five-year "host-community agreement" the company signed with Boston in November. Under that agreement, the company will pay 3% of its gross revenues to the city.

How did the pot shop that just happens to be run by Cabral, ex-sheriff and personal friend of the mayor, get to be the first to approval?

AND the 0.5 mile rule basically means this is THE pot shop for the North End, West End, half of Beacon Hill, Faneuil Hall, and part of DTX.

How did the pot shop that

How did the pot shop that just happens to be run by Cabral, ex-sheriff and personal friend of the mayor, get to be the first to approval?

Because they had their act together and got there first?

Second part? Meh. Its not near anything that could complain about it - no churches, not a lot of apartments, not a residential area. That helps.

Its how things work around here.

If you want to put up a tower you hire someone who used to work in the BRA and make them go before the same agency for approvals. Early on one of the large interests who were trying to open Med marijuana shops brought on deposed Congressman Bill Delahunt and made him the point man. Neither Cabral or Tito are really the bosses of the companies they represent, but they will both get approved because of the Old Friends Network. Welcome to the Kleptocracy.

The 2016 ballot question could have specified that pot-licenses be auctioned to the highest bidder. It didn't do that, which means naturally the most connected groups would get them.

The good news is that a pot shop is finally coming, and those same connected people will make sure it opens without delay.

That’s all fine and well..

But would be better if we still had Halftime Pizza to visit afterward...

Halftime Pizza Still exists on the corner of Causeway and Friend. I just walked by it. Is it planning to close?

overpriced, sub-par pizza that stays busy solely due to its location. construction workers pack the place during the day, and the bar hoppers at night. convenience is its staying power, for sure.

The west ender right down

The west ender right down friend street has way better pizza. And it's closer to the pot shop!

Half Time is still there and just as good as it ever was.

Interpret that as you will.

No independent people apply. Seems like all the old hacks getting their fingers on this one..... "Former" city councilor, "former" sheriff, former BPD Superintendent. I take it Dianne Wilkerson will be in charge of the bank deposits.

Not so sure about Dianne

A fucking joke. Nothing changes in Boston.

oh i know.. lived here enough to know that its all how the palms get greased, and whose are greased. It never changes.

it were already open. i would like some to go with my french toast and my french kisses this snowstorm

Is there any reason a pot show couldn't open at busy MBTA stations such as Harvard or Ruggles.

One proposal is right across the street from Fields Corner.

Ross and Linsky are involved with the J.P. Proposed pot shop.

Boston's kind of a small town

Ross has quickly become the go-to lawyer for marijuana licensing in Boston - he was also the lawyer for the place in Milk Street that was the first medicinal dispensary to open in Boston. And looks like Linskey is trying to become the go-to guy for security consulting.

. Ross and Linsky are involved with the J.P. Proposed pot shop

Happy but I can't stop myself ..

Mr. "College kids are ruining our neighborhoods!" seems to have changed hi$ tune.

At least this one

Won't have a traffic problem

Ross added the company is looking at adding sort of pot cachet balls that would let customers get a whiff of different types of weed - that would be placed back into locked containers after they've made a decision.

Would that be pot-pourri?

Dogs of the Longfellow
Two Boston hotels say murders last month were tragic, but that they're not to blame
Electronic billboard rejected for Causeway Street
On Leonard Nimoy's birthday, Museum of Science announced as location for Live Long and Prosper statue - just three blocks from where he grew up
Man down from New Hampshire to celebrate his 21st birthday fatally stabbed in the back by his brother-in-law, DA says
Man fatally stabbed at Friend Street hotel; suspect arrested