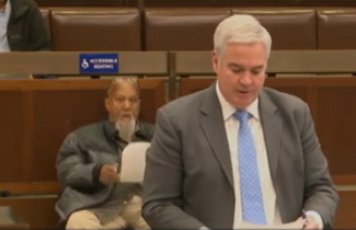 The City Council yesterday approved a non-binding question on this November's ballot that asks voters whether they would approve formally changing Dudley Square's name to Nubian Square.

The proposed question still requires Mayor Walsh's signature, but his administration has said in the past it does not oppose letting voters have a say on what proponents say would correct the error of having the square at the heart of Roxbury's black community named for a slave owner like Joseph Dudley (who, it turns out, was widely hated even in his own day).

City officials say the question has to be on ballots across the city because of state law, but say they will pay special attention to the results in Roxbury precincts in deciding what to do next with the issue.

City Councilor Michael Flaherty, chairman of the council's Committee on Government Operations, formally moved to put the question before voters. He said that at a hearing last month, people who testified supported a name change, although he said some said that Nubian Square might not be much better than Dudley Square because Nubians were historically slave owners as well.

Councilor Kim Janey, whose district includes Dudley Square, said that she is more concerned about working on the direct, daily problems that affect residents, but agreed that people should be allowed to vote on the matter.

No other councilors spoke before the vote.

Is there history there that references?

How about after someone from the Massachusetts 54th?

''For generations of Roxbury

''For generations of Roxbury residents, A Nubian Notion’s flagship Dudley Square store has been a constant presence. Next year, however, the Abdal-Khallaq family will bring an end to the store’s nearly-50 year reign as an anchor tenant in Roxbury’s commercial hub.''

Why not name it after someone significant in Roxbury history?

I nominate Elma Lewis. Naming after a defunct retail store (A Nubian Notion) makes little sense and will be meaningless to future generations.

It's not really naming it after the old store

The Nubians were around long before the Dudley's.

How did this guy ever get a square named after him? Besides owning slaves, he sounds like a generally nasty piece of work.

How do we know the square was named for Joseph Dudley? It could have easily been named for Thomas Dudley, who helped set up Harvard University and Roxbury Latin School, or Paul Dudley, who was Massachusetts' first Attorney General. Or in general it could be named after the Dudley family overall, since they probably owned the land in the area.

In a sense, I have no skin in this game, but I'm with Ron. Find a person to change the name of the square to. Changing it to "Nubian" is akin to when Romney wanted the new Central Artery tunnel named "Liberty." That wouldn't work, so it is named after Tip O'Neill.

Has a nice ring to it.

I don't live there, but

I don't live there, but "Nubian Square" leaves me with the reaction: "what else you got?" Also, if we're renaming the Square, do we rename the Street, too?

I'd go with either something serious (Michael Haynes) or retro/lighthearted (Ferdinand's).

I don't understand why they

I don't understand why they would want to name it Nubian Square? Who is actually asking for this?

The reason seems to be that the Joseph Dudley purportedly had slaves so in keeping with this recent movement the name must be changed.

The issue with the thinking in this case is that the Nubians also had slaves. In fact, the Nubians have become mixed with other ethnic groups in Sudan, and they still have slaves today.

If they are looking for a name change there seems like there would be many more deserving candidates for the folks of Roxbury to choose from.

In 400 years of Massachusetts history there hasn't been a black resident worthy of remembering? I don't believe that at all.

Quock Walker would be a good name to use if you can get over the desire to add ", Texas Ranger" at the end.

faneuil hall should be named in honer of crispus attucks

faneuil hall should be named in honer of crispus attucks.

Full disclosure.. I am a white guy, so my opinion is null.

But I think Malcolm X Square is a great name. I also like Ron's suggestion of picking some historic significance to the local black community to the area.

I fear if its called Nubian, no one will call it that, and it will remain Dudley Sq. Give it the name of someone who has significance to the local community, and people will remember.

Other than the loose connection, Nubian just doesn't fit here. It just sounds too generic of a name (very broad sounding once i read who they are).

Agree with the first suggestion

But applied to Dudley. Attucks Square.

Stevil Square has a nice ring to it, but that's probly just me. :-)

Should remove the names of all former slave owners from their stations and rename them.

We should rename everything in the country named Washington, Jefferson and Lee?

Are they gunna change it again once it’s gentrified?

Did Joseph Dudley own slaves?

I've noticed that the "general wisdom" vacillates between him setting up a government that condoned the slave trade to him owning slaves personally. Surely there would be proof to either claim, but even your Wikipedia article doesn't mention anything about slaves.

What I want to know is what

What I want to know is what Chuck Turner is up to. Is he running for council?

Chuck's doing what he's been doing

He's a community activist. I don't agree with a lot of what he advocates, but he's good at advocating. And from the time he was out at the Grove in West Roxbury supporting the residents with their issue with septic regulations, I give him credit for having a broad view of community activism.

You know, he graduated from Harvard in the same class as Ted Kaczynski. Suffice to say that class of '62 have some guys who served their time.

So we're going to trade in a white slaver owner for black slave traders? No black person in Boston has done anything worthy of a named square for the last 400 years?

Maybe rename it for Edward

Only if they spell it Noobian.

George Washington was a slave owner, so we should change the name of our capital to Tubman, D.C., right?

Actually, now that I think of it, "D.C." stands for District of Columbia, and "Columbia" is named after Christopho Columbo (whom the Brits called "Christopher Columbus" so he'd sound Roman instead of Italian)... so scratch the D.C. too. We can call our capital Tubman, S.J.W. Does that sound good?

Just name it Wakanda square. If you want to play pretend go all the way.

Either keep calling it what it has always been called by everyone whose personal and public history in "Dudley Square" matters (read the Autobiography of Malcolm X for example), or call it what it is rapidly becoming in the wack "woke" world of Mayor Walsh's postmodern Boston - "Gentrification Station"...

i dont find 'dudley' to be offensive

[i'm haitian-american]
i find dudley to be in the same venue as washington, jefferson, lincoln (who ultimately was convinced to free slaves; but, still remained that black persons were not equal to caucasions), ...
they lived in the era where slavery was common and may have even owned slaves themselves. (if dudley was the first governer then its probably fitting to have a square in his honer).
faneuil is different in that he consciously profited from selling humans.
i'm o.k. with changing to jersey street, too.

Who came up with Nubian Square? I preferably name that has great significance and meaning...I need more information, I like Matzeliger Square because he made the sole of shoes to help the average person. He got soul/sole...

Is quite what the people pushing this want.

I mean, we could go all retro and rename it "Hibernian Square," since there was once (and to some extent still is) an institution that was a cornerstone to the area called Hibernian Hall located in the square, and they definitely had nothing to do with slavery in colonial America, or even in America after the Revolutionary War. But again, they chose Nubian for a reason, and in the end that might be the undoing of the plan to wipe away the history of Roxbury.

Hibernian Hall is in active use

I looked that up later.

franklin institute will move there;

so, maybe franklin sq. since b.f. is from there.

Man gets eight years in prison for dealing drugs while awaiting trial for his role in a murder that happened while he was awaiting trial on a gun charge
DA: Boston officer justified in fatally shooting man who had just shot his partner at close range in 2019 Roxbury incident
Police: Man pulled out of car on Melnea Cass Boulevard with a loaded gun - and an infant
Person shot in the back on Dale Street in Roxbury
Woman charged with punching elderly man in a wheelchair in the head and robbing him in Nubian Square
Mothers walk for peace again