Alley oops: Owners of neighboring Hanover Street buildings battle over who gets to use a narrow walkway 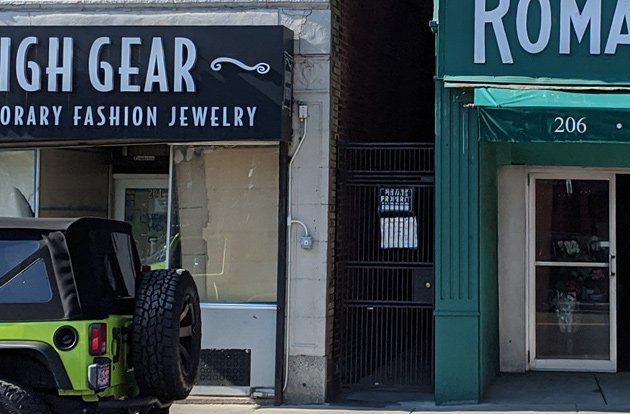 Not much to look at, is it?

The Massachusetts Appeals Court yesterday revived a lawsuit over who gets to use a three-foot-wide alley between 204 and 206 Hanover St., just around the corner from Cross Street, ruling that a Superior Court judge had made a legal error in granting sole rights to the owners of one of the buildings.

The alley belongs to the family that owns 206-208 Hanover St., but a deed to the property dating from 1941 grants an easement to the owners and tenants of 204 Hanover St to use the walkway as well.

In 2015, the Romano siblings who own 206-208 sued to block 204 tenants from using the alley, saying they had put up a gate with a lock more than 40 years ago and that the owners of 204 had failed to vigorously protest, which meant they could "extinguish" the easement through the legal doctrine of "adverse possession" - basically, they aggressively staked their claim and the other side did nothing about that for the 20 years required by state law.

But if the gate only went up around the year 2000, as the current owner of 204 Hanover claims, then the idea of adverse possession would fail, because he vigorously objected by counter-suing in 2015.

In the densely packed North End, even this little strip of land is important - some of the residential tenants of one building use it to access their apartments, while the retail tenant on the first floor of the other building has a door onto the passageway as well.

Suffolk Superior Court Judge Elizabeth Fahey granted "summary judgment" to the family, essentially throwing out the counter-claim and giving the family the right to block off the alley to 204 Hanover tenants, because one of 204's main potential witnesses, a photographer who rented space in that building in the mid-to-late 1990s gave inconsistent testimony in a deposition about when she remembered the gate going up: At first, she testified it was not there when she moved in and only went up four or five years later, but later saying that maybe the gate was there when she first leased the space.

The appeals court ruled that the judge erred because questions about just when the gate was installed - and how the alley has been used - mean the issues were far from "not genuinely disputed" and so, legally, the judge should not have concluded that the "adverse use" had been "open, notorious, and continuous for at least twenty years" and the whole thing should go before a jury.

The overall question, and the more specific one of whether the witness's testimony is inconsistent enough to warrant victory for the family should be left to a jury to decide, the appeals court ruled - especially since the tenant also testified, without being inconsistent, that she had exercised the easement by using the alley several times even though she did not have a key, because the lock only worked from the Hanover Street side.

"When [she] needed to use the alley, [she] just went through [her] store and then went around." She was able to open the gate from the inside, without a key. Also, when she needed her store's floor waxed, the waxing company would "come through the front, they would start from the front, wax the whole floor and then they'd roll out their equipment through the alley." On at least one occasion, she went out her back door and down the passageway, opened the gate from the inside, and let the waxing company in.

In sum, [the tenant]'s testimony, if believed and viewed in the light most favorable to 204 Hanover, would tend to negate the plaintiffs' claim to have used the passageway for twenty continuous years in a manner that was irreconcilable with the existence of the easement.

Interesting. I'd only heard

Interesting. I'd only heard of adverse possession being used for the opposite situation -- someone gaining rights to land they didn't own. In this case, the owner is trying to use it to take away rights from someone else.

Now that we have Google Street View, it will be much easier to establish the facts for this kind of dispute. Historical views go back to 2007. Will this mean a flurry of lawsuits in 2027?

There more to it than what is mentioned

Sounds like there is simply bad blood between the neighbors.

Easy level: build a wall down the middle so both parties each have their own 1½ foot wide alley.
Or for a more mathematically intensive solution: ensure both parties have full access by awarding control of it to the owner of 410 Hanover Street.

Cititzen complaint of the day: Homophobic mask haters in the North End
Temporary Charlestown bridge could open in early July
Cutter at dusk in the North End
North End dog park reopens, but nobody's going to have a ball
Boston to look at expanding sidewalks onto roadways, creating more dedicated bus lanes
Restaurant owners begin talking about how to adapt: A Kowloon car hop, patio seats on Hanover Street