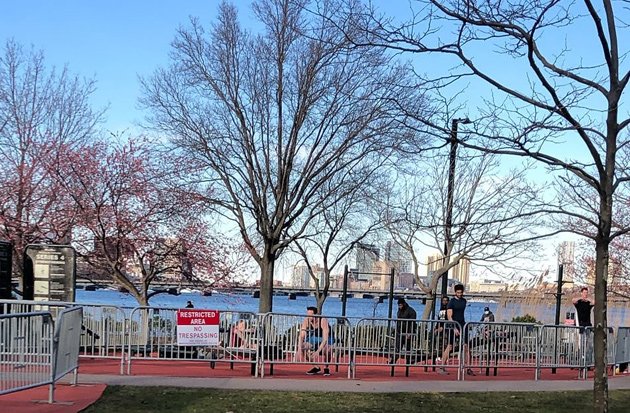 Charlie Baker and Marty Walsh can order up all the barriers they want and issue all the urgent pleas they can, but with nice weather yesterday, people were ignoring both, from North Point Park on the Charles River to the skating park on Reservation Road in Hyde Park.

Boston's 311 system filled with complaints yesterday, of both kids and adults disregarding requests from city and state officials to keep themselves apart from others while outside. Masks? Forget about it.

Somebody walking her dog in the area forwarded this photo from the Lynch Family Skate Park under the Deck yesterday: 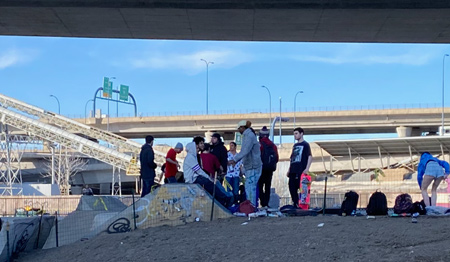 I normally walk my dog through Science Park, over the pedestrian bridge next to the skate park then back through the locks to the garden. Today, on the first 60 degree day, the skate park was overrun with kids, this is one of the smaller groups, there were groups of 20-30 people congregated on the opposite side.

I can mind my business on that part, it doesn't affect me, not my business to be telling them what to do.

What does affect me is the kid on the way to the skatepark riding a Vespa scooter in wheely fashion over the pedestrian bridge. I attempted to flag him down to stop, citing children and dogs on the bridge, but was only welcomed by his trail of friends on bicycles who proceeded to call me, cunt, bitch, whore as they rode by me, one of which checked me with bike.

Also, the park was officially "shut down" last month. Why not take this opportunity to skate around a virtually empty city instead of the skatepark?

Neighborhoods:
Boston
Free tagging:
Coronavirus
Ad:
Like the job UHub is doing? Consider a contribution. Thanks!

... and play the sound of someone coughing.

People are just stupid. But I get it. Not justifying it by any means however...

I live alone. I see no one except my neighbor at a 10 foot distance when she's in the yard with her dog. My interaction is restricted to coworkers over Zoom or Hangouts. I don't have a pet or SO.

And I love being alone. Often I live for the weekends so I can shut off my phone and be alone. But after a few weeks of this, even I'm starting to fall apart because of it.

For many, getting social interaction off a computer, text, or phone is satisfying. For others it is not.

I think many are just not aware that their drive to do this is because they want to be near other people.

Again not trying to justify this at all, but I get it. I’m lonely.. but I am conscious to know my longing to be with people is because I have to stay home. So I just ignore it.. and do my best. But as time goes on.. it is getting more difficult

That's kind of a charitable

That's kind of a charitable explanation. I believe a lot of people are just treating this as a long weekend and refuse to disrupt their normal routine even slightly, other than climbing a fence to play on the grown-up playground.

I hope there will be more discussion of the mental effects

on people expected to stay home alone and away from others for weeks, especially as it drags on.

They are six feet apart

The people in the top photo are six feet apart.

They are all sweating over

They are all sweating over and touching the equipment. The 6 foot rule is not the only thing you have to worry about, you have to consider contamination on surfaces. Also what part of "this virus can hang in the air for awhile" don't you understand?

BTW the 6 foot thing was determined in a lab with no airflow or wind.

6 feet apart but still touching the public exercise equipment. Virus could easily spread by someone touching that, then wiping the sweat off their nose.. or a number of other ways. Too risky

Probs would help to have more open space to walk

Look what Denver did, some simple barriers up. Its not perfect but I think you can draw some conclusions on why:

"The only conflict that anyone has noticed in the 48 hours or so the roads have been closed to cars has been pedestrians yelling at drivers who they believe are not complying w/ the road closure signs."

Required disclaimer that this isn't about bikes, its about providing adequate recreational space for people while maintaining social distancing.

I honestly don't understand why it's so hard to just not go to anywhere other than the supermarket or drug store right now. Take a short walk or bike ride around your own neighborhood by yourself if you really feel the need to get some fresh air. But we should all be avoiding other people or groups of people right now. This week and next week are supposed to be the peak number of infections. It's not like we're sending people to war to get shot at. We're just asking people to please stay at home. It's not that hard and it's not forever.

It’s arguably worse for these people to be at home in confined spaces with their old or sick family members.

What?! Having old family

What?! Having old family members at home is even more reason to not gather in groups. One of these morons is gonna spread the virus to others in the group then they will bring it home to the old people they live with.

They probably already have the virus

They have probably already been exposed. Now you are demanding that they be stuck inside for 24 hours breathing on their nanas.
And Nana should get out because the chance of catching the virus outside is virtually 0.

I don't think you understand how communicable diseases work

JennyR, the more people you

JennyR, the more people you are exposed to, the more chance you have of catching the virus and spreading it to others. What's so hard to understand about that?!

If they live with elderly

If they live with elderly parents or grandparents more the reason to not be outside. They shouldn’t be leaving the house because of the risk of bringing the virus back. If they are going out for essentials they must be careful.

In the short run, closing parks may seem prudent, when our hospitals are overrun and we are trying so hard to curb the spread of COVID-19. But in the medium to long run, it will turn out to be a mistake that backfires at every level. While it’s imperative that people comply with social-distancing and other guidelines to fight this pandemic, shutting down all parks and trails is unsustainable, counterproductive, and even harmful.

Finding sustainable policies is crucial, especially since this pandemic likely isn’t going away in a few weeks. It’s plausible that we will be social distancing, on and off, for another year. That means we need to consider how to maintain compliance with strict measures over that long of a time.

The outdoors and sunshine are such strong factors in fighting viral infections that a 2009 study of the extraordinary success of outdoor hospitals during the 1918 influenza epidemic suggested that during the next pandemic (I guess this one!) we should encourage “the public to spend as much time outdoors as possible,” as a public-health measure.

For many, this is their

For many, this is their neighborhood.

Take a short walk or bike ride around your own neighborhood

For a lot of people these places like the Charles river are their neighborhood. Not everyone lives in a suburban cul de sac or low density neighborhood like West Roxbury or Hyde park.

You really don't have to stay

You really don't have to stay home. Being outside is fine. Hanging around near other people is not. But it's definitely possible to go outside (and even go on a long bike ride!) without going near other people.

No teeth behind Baker and Walsh "advisory"

"Advisories" without enforcement won't flatten the curve. I've been observing private contractors standing close to work crews chatting about their non-essential home improvement work all week. I've shared this with Walsh and Baker's office every day. We've been told about horn honking events where people gather in their cars in Northhampton, while veterans are dying in nearby Holyoke. Tone deaf behavior. Enforcement is not part of the Mass. Governor's "advisory". Folks flaunting social distancing are going to home to their families who work in other "essential" businesses such as pharmacies, and hospitals etc. I guess the contractors here don't know or care about community spread...sad. California and Washington flattened the curve with tough restrictions, enforcement, and fines. Why does Mass. think we can do it without the same?

Vespa scooter is not legal on the North Bank bridge

even in the absence of a pandemic. An electric-assist pedal bike is probably OK, but not any sort of motor vehicle.

The mods. They're fast enough already.

Some arrests will change

Some arrests will change people’s actions here real quick. Arrest them then let them go with no charges but send a message. Word will travel quickly.

What, skip leg day? Are we savages?

Americans are not good at delaying gratification.

While I'm sure it isn't true for all of those kids, remember that domestic violence and child abuse are a reality for many people and the stay at home protocol may be deadly for them.