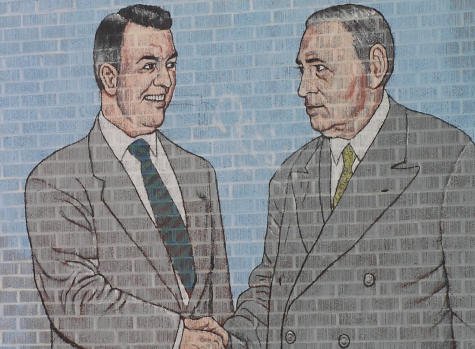 In the actual photo the mural is based on, Curley wasn't so thrilled.

The Boston Licensing Board yesterday approved the $2.4-million sale of the shuttered Squealing Pig on Centre Street at Hastings Street to two operators who plan to open a new pub called the Boston Ale House there - over the opposition of Hastings Street residents, who said they worry about patrons parking and carousing along the quiet way that starts just after the restaurant's locally famous mural featuring both a scene from the good old days on Centre and James Michael Curley shaking hands with Dapper O'Neil.

New owners Edward Byrne and William Lombard - whose proposal still needs approval of the state Alcoholic Beverages Control Commission - say they will keep the same hours as the Squealing Pig - with a licensed closing time of 1 a.m., but 10 p.m. for a 32-seat seasonal patio. The interior could theoretically hold up to 196 people, should a cure or vaccine for coronavirus ever be released.

At a hearing on Wednesday, several Hastings Street residents said their street has already become a parking lot for commuters too cheap to pay for a space at the nearby train stop and that they worry about Ale House customers using their street for parking at night, rather than on Centre Street, which becomes largely empty at night, or in the municipal parking lot at the corner of Centre and Hastings. There's "severe parking overload" on the street, resident Mark Horenstein said. "There's no doubt in our minds that parking for that establishment will overflow onto our street for the night."

Resident David Sherr added, "We've had a lot of bad experiences [with people] staggering out of whatever establishment was there."

Byrne and Lombard said they were in it for the long haul and want to do right by neighbors. They said they would post signs inside urging patrons to respect the neighborhood and would have their employees park in the municipal lot.

Doesn't seem like a real good time to open a bar. Unless it had an awesome name -- like Universal Pub.

I think this might have been in the works for a while before covid hit. My wife and I used to play trivia at the Squeeling Pig sometimes and the last time we were there (in February), the trivia host told us that the prizes couldn't be gift cards anymore because the restaurant had been sold.

The rumors about the Squealing Pig closing started before the virus.

brilliant. Adam, any thoughts of becoming a barkeep/jounalist?

My grandfather once owned a bar.

You forgot:
Just Like the T, This Drink Ain't Free.

Sorry, I tried but I don't have Adam's rhyming talent.

It’s not your street, you

It’s not your street, you whining brats. It belongs to everyone. Don’t want to live near a bar? Then don’t live in a major city.

They may not own the street but just because you live in a city doesn't take away someone's right to advocate for their interests.

I don't think parking, or lack thereof, is a pervasive argument but people still have the right to go to meetings and bring it up.

Bars straight up should not

Bars straight up should not be allowed to have parking. People should turn in their drivers licenses at the door and should be required to blow under there limit to get them back. This society goes to the most absurd lengths to absolve people of behavior that endangers others, then punishes them for poverty.

Have you ever been to Centre Street? We're not talking Comm. Ave. or Broadway here (we're not even talking Centre Street down by West here).

If the people on Hastings are really that concerned, they can do what the people on the side streets down near West did when that area became a strip of take-out places: Get resident permit parking for their street. End of problem.

Because this place will draw most of its clientele from outside West Roxbury? I'm not so sure.

Let's pretend it's normal times again. West Roxbury rolls up its sidewalks at, what, 9 p.m.? Is it that hard to find parking on Centre Street during peak times for a pub? Even the Porter Cafe (granted, a lot smaller than the West Roxbury Pub, um, Eat with Jack O'Neill, um, Squealing Pig, um, Boston Ale House), in the very heart of West Roxbury's double-parking zone, managed to stay open despite resident-only parking on the nearby side streets.

Resident permit parking, combined with a bit of police enforcement (West Roxbury residents are nothing if not accomplished at complaining to police about stuff) would also do wonders for Hastings Street's other issue - those daytime commuters walking down to the train stop.

The place = the old place

If a brand spanking new bar was planning to open in a location that was formally a daycare center, then yes I could see people worrying about what could happen. The new Ale house is replacing a bar/restaurant that has been there for years.

Exactly... establish and enforce a resident parking policy on Hastings St. during the evening hours when business (and unpleasant behavior related to alcohol consumption at the new restaurant) is likely to be of greatest concern.

These bars are filled by 40-60 year olds having dinner and drinks.

That being said these residents are more upset about losing parking spots for their second/third or visitors cars than they are about drunks going through the streets at 2am.

How close to you live to your nearest bar?

(And yes, I know you are too wimpy to reply, but I will assume you don't live near a bar.)

There was a bar there before. How is this different?

I see your point, though if there were issues with the previous establishment, one could easily see why they would have issues with its replacement.

That said, Kinopio understands West Roxbury less than I understand the suburb where you live, and I would imagine he would be the first one to gripe if he lived on this street.

To be honest I have been in

To be honest I have been in the Squealing Pig and West Roxbury Pub before that for dinner and its not been overloaded with people most of the time I would say less than 20 and always found parking right in front. Not sure where the overabundance people are to worry about parking.

Why the gratuitous swipe at Dapper?

Curley was a beloved character, but also a rogue who became wealthy as an elected official. Dapper was certainly not politically correct, but he was a WWII vet who worked tirelessly for his constituents until he died, never owning a home.

Beloved depends on whom you ask

But in any case, my issue is that the mural is based on a real photo (see it here), but it was altered in one key respect: Compare Curley's visage in the two.

Mural has other issues

As a rail advocate and someone who has followed the MTA and later the MBTA, the image has another faux pax.

The presentation of the Type #5 streetcar, or trolley as us Bostonians often say, is displayed as green in color. This may be due to the fact that the mural was created at a time when the MBTA was in the process of painting its streetcar fleet green to make it the Green Line.

The problem, is that in those days, the agency was the MTA and all of the streetcars and buses were an orange hue much like those that ply the Mattapan line. Here's one from Pinterest from a fan trip at North Station on the former Canal Street Loop. You can also see this color on the vintage streetcars stored off to the side at Boylston station.

Given that the mural went up ...

During the West Roxbury Pub days, when every single interior wall was painted with a series of images of the life of James Michael Curley, I wonder if the color was done on purpose as an homage to the Irish-Americanness of him and the neighborhood.

That is Steve Slyne a beloved member of the West Roxbury community and owner of the former Slyne's Deli!!!!!

And so I can say you're wrong. That is most definitely not Steve Slyne, and I'm guessing you never went into the place when it was the West Roxbury Pub. Again, take a look at the photo that part of the mural was based on.

Here is a photo of Steve Slyne (also shaking hands with someone). It's just not the same guy.

He was well known in West Roxbury for sure... but not that well known to be memorialized in a mural.

As a child, I met Tip O'Neill when he came to my uncles wake. I called him Dapper due to the similarity between their last names.

He and a few others laughed but I didn’t get what exactly was so funny at the time....

He was a sexist, racist, homophobic pig who worked tirelessly to cancel people he didn't like and force his religious views of record on anyone that he could.

While the accusations of sexism and racism would have merit, I can’t say I recall him ever “cancelling” someone or doing anything involving religion. But, since he is dead, white, and male, I guess we can just throw anything out there, no?

Cancelling wasn't a thing back then

People on the extreme right just insulted people (or worse), rather than whining about how other people were "canceling" them by disagreeing with them.

To get the full flavor of how repulsive O'Neill was, read this 1976 article that provides extensive examples of his thinking about women and gays (the Vietnamese comment came later).

Was he elected while in jail?

To my former neighbors on Hastings Street, we can always bring back the Center if you want to experience a noisy bar with “interesting” patrons and owners. That’s the type of local subculture that West Roxbury is missing! While we are at it, let’s bring back the Hastings Street School and the Hasting Street satellite police station. The last time it was a quiet street was when West Roxbury was part of Norfolk County. I am more offended by the statue of the virulent bigot Teddy Parker on the corner of Corey Street than any representation of Dapper or a local restaurant.

Oh, so he had character

Was perhaps as useful a councilor at O'Neil, but he wasn't a hateful, bitter person

Dapper was all of that

He was a sexist, racist, homophobic pig

, all of which is true. He was an angry and hateful man at times.

Fun fact. In his waning years Dapper was going blind, and travelled with a companion named Mohammed. I don't know if Mohammed was an employee, friend, or what. They were often seen dining together at Amrheins.

Dapah was never married. According to some older friends, when he was younger he frequented Playland in the Combat Zone. I never saw him there myself when I hung there in the 70s and 80s He was an enigma.

Dapper was not an enigma He was white

He was a homophobe who worked

He was a homophobe who worked tirelessly against the LGBTQ segment of his constituents.

Why not make Hastings St West Roxbury parking only? That will eliminate some of the cars.

Receding Charles River has exposed not just mud but invasive snails
Not enough rain in Stony Brook Reservation, part of which is now on fire
All that rain had to go somewhere
Serene green queen
Charles River drops below a beaver's knees in West Roxbury
Walking their kayaks down the Charles