Center folds: Board agrees to sale of local strip club to national chain 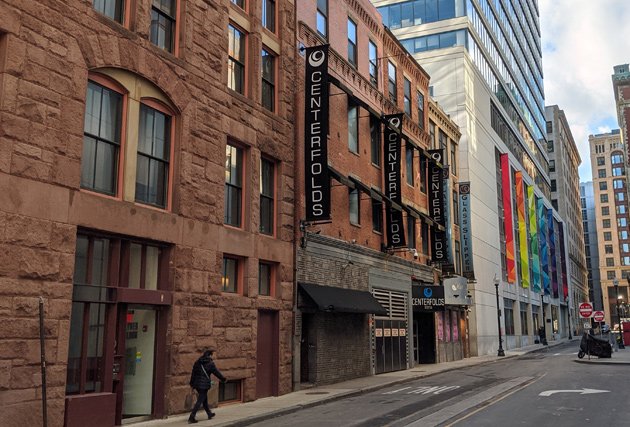 The Boston Licensing Board yesterday approved the sale of Centerfolds on Lagrange Street - now half of Boston's Combat Zone - to a Texas-based, publicly traded ecdysiast chain.

The vote came after a Wednesday hearing at which nobody rose to oppose the sale of Centerfolds, which traces its routes to the old Naked i. The mayor's office and the office of district Councilor Ed Flynn supported the proposed sale, which also requires the approval of the state Alcoholic Beverages Control Commission.

RCI Hospitality Holdings of Houston says it will pay $15 million to buy Centerfolds and its building, which huddles next to the Combat Zone's other remaining strip club, the Glass Slipper.

The chain, which employs exotic dancers in ten other states, said it would not change much at Centerfolds, except to rename the place Rick's Cabaret. It will also have to comply with Boston regulations that will set the club apart from some of its other operations, notably a 2 a.m. closing time and a ban on any physical contact between customers and dancers, even in the private-performance rooms up on the third floor.

Centerfolds has been open since 2000, after taking over the liquor license of the Naked i, which had moved to Lagrange from Washington Street.

You learn something new every day

Today I learned a new word.

You beat me to it.

Now try to use it 5 times today in conversation so that you remember it.

It's not so hard

...is what the ecdysiast said about our President's penis.

The etymology of the word is amazing

So, it turns out the reason it even means striptease artist is because of H.L. Mencken. He coined it as a neologism and reverse evolution from an actual scientific term, ecdysis, for snakes and other creatures who shed their outer layer of skin.

But the really amazing part is that scientific term was taken from greek words for "I get out (of clothes)". The scientists then used it to relate to how animals shed...so it came full circle...Greeks stripping to snakes shedding to dancers stripping again!

It's not just a fascinating word...it has a really crazy history too!

The word ecdysiast was apparently coined by H.L. Mencken, by analogy to the molting of birds. The first citation in the OED is from him:

It might be a good idea to relate strip-teasing in some way..to the associated zoölogical phenomenon of molting... A resort to the scientific name for molting, which is ecdysis, produces both ecdysist and ecdysiast.

Postcript: I had not seen the above post, which is much better than mine, when I posted this. The etymology-of-the-etymolgy is brilliant.

I hope they have one a them there bull-ridin machines.

Isn't this supposed to be a news blog with a local flair?

We'll. Lagrange Street was basically dug up and new stuff was built there. Washington and Lagrange remained.

Dirty John's was the hot dog

Dirty John's was the hot dog stand on the corner, that street had a lot of action going on , and it was a bad place,

Will everybody come there? Will there be a Sam at the piano? (I am available.)

Maybe it's a different Rick, but one that also needs to lay low for a while. Will there be alien entertainers? Will security be provided by a dweebish kid in a yellow shirt? If it's that Rick, the stage show will probably be pretty interesting/horrifying, but the risk of being devoured by plants or undergoing an involuntary species-change may be unacceptably high.

You've got it all wrong

I don't go to Centerfolds often. But once they rename the place, I'll probably put down my knitting, my book and my broom. I'm curious if they'll scale the place up a bit and have any decent wine to taste or if they'll get a live band or have an open mic where I can play my horn or not. If you think about it, this place will be a good way to take your mind of Trump, that prophet of doom who keeps on wiping every smile away.

In fact, my friend Elsie, with whom I shared a two-bedroom apartment in Chelsea, was a prostitute. The day she died the neighbors came by to snicker. They knew she did a lot of pills and liquor and didn't approve. But when I found her laying there like a queen, she seemed happy anyways.

I think of Elsie many days. I remember how she'd told me, "What good is sitting all alone in your room?".

She's probably right. So, when I go, I'm going like Elsie. Life's like that you know. So, I'll probably come to Rick's Cabaret, old chum. I mean, why not. It's only a cabaret and I love a cabaret.