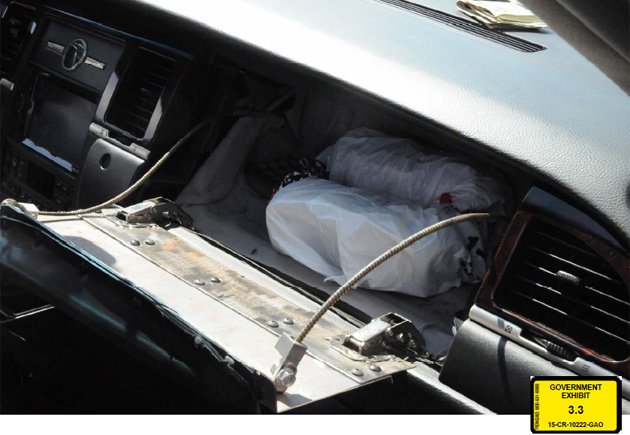 A federal appeals court yesterday upheld Ilir Bregu's 2018 conviction and six-year sentence for regularly driving oxycodone pills in his Lincoln Town Car from Staten Island to a Revere home whose occupants, a father and son, would then sell them out of their garage on Bennington Street in East Boston.

At issue were warrants the FBI obtained to track Bregu's location during a 2015 investigation via cell-phone records - and for his Town Car, in which FBI agents found $37,800 in a hidden compartment behind the dashboard.

Bregu's attorney argued that the first warrant - which led to four others - was illegal because the FBI did not have sufficient evidence to show probable cause to get Bregu's cell-phone location data, because the application for the warrant was "mainly" based on evidence from an unreliable confidential informant.

The US Court of Appeals for the First Circuit in Boston, however, disagreed, saying the warrants, which helped lead to the arrest of Bregu, along with the owners of D & M Auto Doctor at 1181 Bennington St. in East Boston, were all valid.

In its ruling, the court said the application for the first search warrant came only after the FBI was already well underway with what had become a three-year investigation into drug sales at Mario and Manuele Scata's garage, an investigation that included mounting a surveillance camera outside the Scatas' home in Revere and using a special tap to obtain the phone numbers used to call them there - plus information from two other informants, one of whom made a purchase, at the FBI's direction, of pills at the garage.

It was all this evidence that was used to seek the search warrant for Bregu's phone data, not just the word of a a single informant, the court said.

The affidavit [by the FBI agent seeking the first warrant] contained exhaustive information implicating Bregu in an oxycodone-distribution conspiracy with the Scatas, even in the absence of [the first informant]'s tip that Bregu was selling oxycodone. Together, [phone-number] data from Mario's phone combined with pole camera footage from outside the Scata residence established a pattern -- at least five times in less than three months - in which Bregu made brief contact with the Scatas by phone and then traveled from New York to their home in Revere, where he stayed for just a short period of time before driving back to New York. That the purpose of Bregu's visits to the Scatas was to supply them with oxycodone pills was further supported by both [another man arrested in the scheme] and [the third informant]'s statements that the supplier for Mino and the Scatas was based in New York, not to mention the fact that [the third informant] successfully executed two controlled purchases of oxycodone from the Scatas just days after two of Bregu's brief visits.

Now the taxpayer gets stuck for $ millions. And what do the big guys get that made $ billions? Their name on a building at Harvard. A 100 years ago the substance of choice was on store shelves and we didn't have overdoses, crime, massive prisons, or high taxes...even phony wars are expensive in many different ways. According to census data from 1800 to 1900 the percentage of people self medicating stayed at a constant 1%, same as it is today. There are an awful lot of people whose livelihoods, on both sides, are dependent on keeping things the same and rightly fear a sensible approach, after all it is the biggest business in America, with combined income exceeding the ten biggest corporations. Adam rarely posts my comments on this subject, as virtue is slow to learn of vice.

Yet they still can participate in the states vehicle inspection program??
https://www.mavehiclecheck.com/apps/station-locator

Maverick Square to get a new ferry dock
Four-alarm fire rips through duplex on East 7th Street in South Boston
Fire on Eutaw Street in East Boston displaces 15
Board rejects couple's plan to convert their East Boston Airbnb into a 'lodging house' so they can keep renting it out
Health scare on plane from China that landed at Logan
With toll booths gone, truck drivers storrowing in Sumner Tunnel at worrying rate