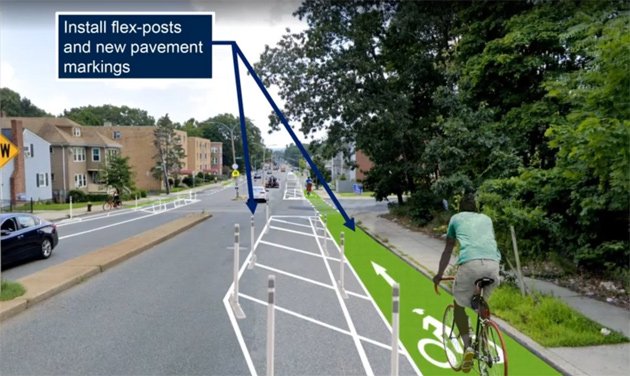 A city pilot aimed at making Cummins Highway safer by reducing the number of lanes from four to two and adding dedicated bicycle paths will be extended from Wood Avenue to American Legion Highway by the end of the month - as the city looks at more permanent changes along the thoroughfare - a Public Works project manager says.

The ultimate goal is to reduce both crashes and the severity of the ones that still happen by slowing traffic along the thoroughfare and by providing bicyclists and pedestrians - always the most vulnerable in crashes - safer ways to travel along and across the road. The road is currently in the top 3% of all Boston roads for crashes, Alexis said.

Alexis said that by month's end, workers will begin replacing the current construction-style barriers erected earlier this year for the pilot and replace them with flex-posts and markings that should make the road less confusing for motorists. Also, BTD and police will begin issuing warnings - but not tickets - to motorists who use the bike lanes for parking. And a public-works crew will patrol the area to remove trash and debris from the bike lanes.

Alexis continued that the current pilot, which runs from roughly Brockton Street to Wood Avenue, will be extended to the intersection with the equally non-highway American Legion Highway, where the city is planning on permanent bike lanes from there all the way to Blue Hill Avenue.

Later this year, city planners will spend several months designing permanent changes for Cummins that will likely be installed starting next year.

Alexis said data collected during the pilot to date showed that narrowing Cummins has slowed traffic - average speeds are down 14% between Wood and Brockton, but up 6% on the stretches outside the pilot area, although he added there's still a significant number of people exceeding 30 m.p.h., which is now 5 m.p.h. than the official speed limit on the street. Even with the slowdown, it now only takes about 30 seconds longer to get between Wood and Brockton, he said.

But the 11 crashes between July 24 and Sept. 20 - two involving pedestrians - show the city still has more work to make the road safer long term. He added that comparisons between a pilot run during a pandemic and earlier years is valid, because total traffic volumes on the road have dropped only about 15% from pre-Covid-19 days, which he said is not statistically significant for traffic-planning purposes.

Alexis acknowledged concerns from residents that few bicyclists seem to be using the new bike lanes, but said that's typical for new bike lanes - usage, he predicted, will pick up once the lanes are made more permanent, and once bicyclists realize that the debris now being dumped in the lanes will be picked up.

About the photo caption

Are you sure that this is what Cummins Highway looks like now? I was by that spot 7 days ago, and it was plastic Jersey barriers along the road, and a bunch of utility work going on, no joke, right where those arrows are.

As a driver, I have no problems with this. I think those who park will have do adjust, but that will happen. For public safety purposes, the median will have to go, but in the end the road will probably be better for all users.

Good question about the image. That is indeed not what the pilot lanes look like right now. However, the plan is to convert them to what is in the image as a phase 2 improvement, beginning this month. The final design, which will remove the median as you suggest, will look more like the bike lanes on Comm Ave. between the BU Bridge and Packard's Corner, which is to say they will have curb separation between the bike lane and the parking lane. Even phase 2 looks like a great improvement, though!

coming soon. It is a rendering from the presentation linked above.

Did I miss part of the

Did I miss part of the presentation, where they talk about removing parking spaces? All I heard about parking was that residents don't like the parking to be separated from the curb by the bike lanes, so the planners are taking it into account and moving there parking back curbside, with the bike lane next to the travel lane (which is fine by me, fwiw).

Cummins is a regular

Cummins is a regular neighborhood through street. But American Legion Highway feels like a parkway, since it's 4 lanes with a median, and has some really long distances between intersections.

30 seconds in travel time. Now we know how much we gain when we risk (and sometimes lose) human life just to speed to the next red light.

Are they eliminating all of

Are they eliminating all of that street parking?

Seems that will just make life more difficult for the residents of the neighborhood. A bike lane protected by a parking lane seems a logical choice no?

People think it provides protection, but riding on the wrong side of parked cars will always be dangerous.

Super common there, where they are many, many more cyclists. I understand your argument but I wonder if the data supports it? I do think here where many drivers are hostile to cyclists and distracted driving is the norm that the hooking probably would be rampant.

Nobody actually watched the

Nobody actually watched the presentation, huh?

A warning for breaking the

A warning for breaking the law by illegally and dangerously parking in the bike lane? Wow! So harsh! That’ll show ‘em!

People have parked next to the sidewalk for decades

A period of time for adjustment will be needed. Warnings are warranted, though eventually they will have to be tickets for things to work. I think things will work out long term on this street, by and large.

People die everyday, it’s part of life. Doing all of this for “Safety”. My ass!!! Learn to ride a bike and pay attention to your surroundings. I’ve been riding since I was a kid, never no helmet, no pads and I have never been hit. Bicyclist think they are entitled and that they own the street. 30 seconds more, what a lie... more like 30 minutes

I'm sad for you

I'm sad for you

Your first sentence should begin with the word "Other".

It's understandable that you don't feel the need to wear a helmet. You have so little to lose.

This is going to cause traffic jams, ppl getting to work, school and appointments late. It’s not going to stop the speeding or prevent accidents it will definitely cause more issues, and ROAD RAGE ... Good Job