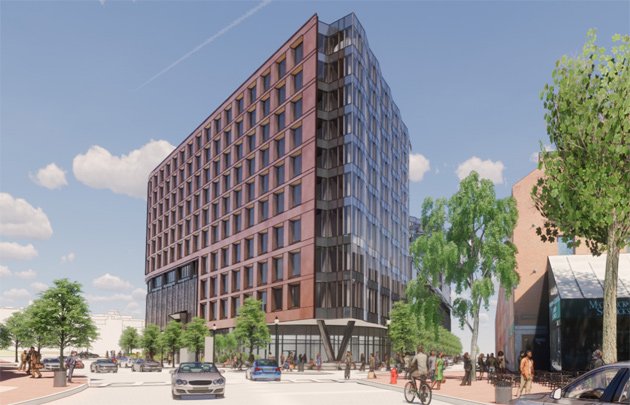 Fortis Property Group of Brooklyn has filed revised plans for the garage next to Faneuil Hall Marketplace that are browner and less curvy than its original proposal and which feature fewer, but larger, residential units in a structure to be place atop the existing seven-level garage.

Fortis's original $120-million proposal was strongly criticized by local preservationists for its visual impact on the neighboring Faneuil Hall Marketplace: A spiral, largely glass-framed structure behind a marketplace that first opened when Massachusetts was still a colony. 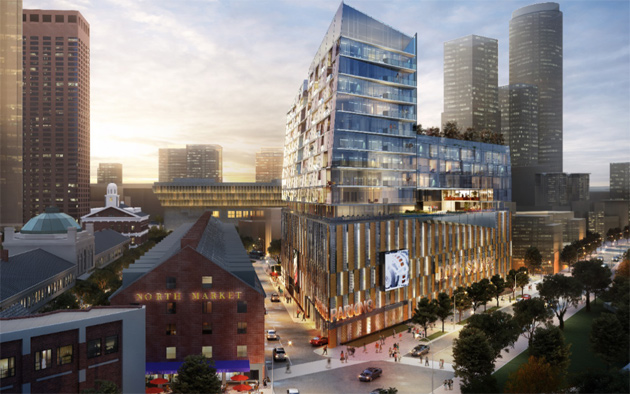 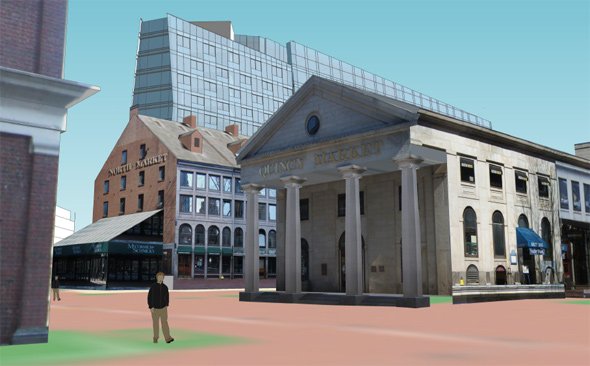 Under Fortis's latest plans, however, the swirly design and glass cladding was replaced with a more traditional series of floors and "a warm-toned metal panel base that fits into the context of the neighborhood."

Also, the new building is slightly larger and taller - by four inches - than the original proposal, but the number of residential units has decreased from 209 to 134 units - some of which would be in what are now the top two parking levels, which would be converted to residential use. The number of "affordable" units would remain at 27.

The building would continue to have parking, but 450 spaces, instead of the present 698. Ground-floor restaurant space has shrunk from 11,500 square feet to 9,000 square feet.

How dare we build something new next to something old to replace a [shuffles papers] parking garage!

Won't anyone think of the children?!

I haven't heard any

I haven't heard any opposition to this... maybe you're confused.

The opposition was to the previous design

If you are trying to blend in with Quincy Market shouldn't the first floors be empty in the new building?

everyone cared about the aesthetic of actual residential neighborhoods this much.

Unrelated, hat tip to the dev for keeping the affordable count the same and actually increasing the ratio.

I'm sure the prestigious Brownish Building will prove popular with prosperous renters.

"its visual impact on the

"its visual impact on the neighboring Faneuil Hall Marketplace"

Faneuil Hall Marketplace is an undisputed tourist dump but I wonder if someone said the same thing when Kallmann McKinnell & Wood originally proposed the dysfunctional monstrosity that is City Hall way back when people thought it'd be better to kill the city instead of fixing it. Or overlooked JFK Federal Building disaster.

That being said, I believe that the original proposal didn't go far enough in terms of being an innovative design and thus it was easy to hate. At first they choked and instead of learning from the error, the developers return with something that best resembles 28 State St. in what can only be described as an effort to appease those dissenters, I imagine they live far from Government Center but perhaps I'm wrong, who've somehow glued themselves to a position that anything new must resemble something old and gone, like The Hub on Causeway, otherwise their small minds won't be able to weave together a sense of time and place. Unless it has Boston Beer Company written all over it, because then they recognize the area's cultural impact on their formative years.

While I realize that the effort to promote modern architecture in this poor city is a futile one, my only hope is that they finally replace the sad '80s-themed Hard Rock Cafe with something that reflects the progress society has made in the past thirty years, like a Pink Taco.

...the reaction of somebody in the room was, "What the heck is that?" Only a word much stronger than heck was used.

Housing On The Greenway You Say?

There was a building built close to International Place in the past couple of years. It replaced a parking lot (And Yes, it replaced The Times which before was Boston's Greatest Ever Australian Bar; Ayers Rock).

On one of the floors a children's teepee is set up in one of the big glass windows. Sometimes in the morning the kid inside waves to people or is just running the around room as you walk from Rowes Wharf to your destination.

More housing please and thank you.

it's no worse than what's there now, I suppose...

This is better than the

This is better than the original proposal but it's still all just so boring. I don't know why good design is so difficult.

Man who sued Marty Walsh over criticism of post-Charlottesville rally on the Common lost his state case so now he's suing in federal court
Downtown water-main break causing flooding as well as water-pressure issues in parts of South Boston
A spring tide in the fall at Long Wharf
Man dead on tracks at Downtown Crossing
Man charged with getting off on the Green Line
Man wanted for kicking, spitting at woman at JFK/UMass T stop may have also attacked an Uber driver downtown