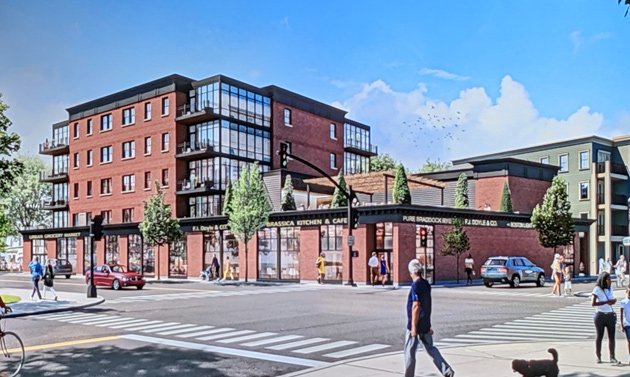 A local developer who had been going to Doyle's since he was a kid has teamed up with Brassica Kitchen in Forest Hills on a plan to renovate and re-open Doyle's in its original Washington Street building by using some of the profits from the sale of neighboring condos.

Lee Goodman of Watermark Development and Brassica co-owner Jeremy Kean discussed their proposal at a meeting with about 50 people in the parking lot right behind Doyle's tonight, along with their architect, Elaine Scales of Jamaica Plain. Goodman said he wants to restore a place that was more than just a restaurant and bar, but a community gathering spot.

Under their proposal, the Doyle's building would retain its current footprint but would undergo extensive external and internal renovations - and have a rooftop deck added. A house next door on Washington Street would be replaced with a small neighborhood market topped by four floors of condos - 16 in all. Part of the rear parking lot would be replaced with a four-story, seven-unit condo building, while six more condos would be built in a new three-story building across Williams Street on land that was also originally part of the Burke family's holdings.

Goodman said the new Doyle's would keep the existing bar, although he said he would likely have it removed first for renovation before reinstalling it. The rest of the interior would be reconfigured for an upgraded dining area, a new "Kennedy Room" meeting area and a partially open kitchen, Goodman said. He added the interior would have a capacity of 100 people, the deck 100 more. The building would have two elevators added, in part to make the roof deck ADA compliant, he said,

Goodman added the interior will be "an homage" to the old Doyle's, which closed last fall, with the same sort of old-style murals and posters that made the old place such a Boston landmark Scales said she would try to keep other original parts of the restaurant, such as its tin ceilings.

If people who bought some of the posters at auction when Doyle's closed would want to give them back for re-hanging, that would be great, he said.

One change would be on an outside wall, where the current "Braddock Cafe" would be changed to "Brassica Cafe and Kitchen."

Kean said he's planning a menu focused on pizza and fried chicken "with a lot of really fun stuff in between." He said he hopes to transfer Brassica's current liquor license to the new, larger location.

In response to one worried resident, Kean said, no, he is not planning anything yuppieish or hipsterish, like with sushi, Brussels sprouts or fois gras; "none of that fancy shit that's expensive to justify - [just] tasty stuff for everybody."

"The food here was never the draw!" one resident yelled. 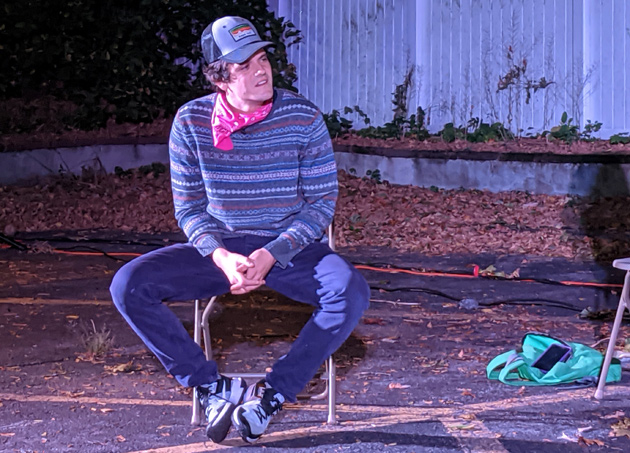 Goodman, who recalled his parents taking him to Doyle's when he was a kid, said the idea is to keep Doyle's as a family place. A key part of that, he said, is providing parking for families who want to drive up after a Little League or soccer game on a Saturday or Sunday. He said his proposal would keep 30 parking spaces for restaurant and store patrons, with condo residents getting a "stacker" system for their cars.

Goodman acknowledged he'll be facing a challenge to get a bank to lend money to renovate a restaurant building that needs a lot of work, no matter how many fond memories people have of it, in the middle of a pandemic. He said he's looking at trying to convince a lender to let him use profits from the sale of the condos as collateral for the money he'll need to re-do Doyle's.

He added he's also thinking of asking the city for money from its Community Preservation Act fund to help renovating a building that is an important part of local history - one of the things the city can spend the money, collected from a surcharge on real-estate transactions, is for historic preservation, 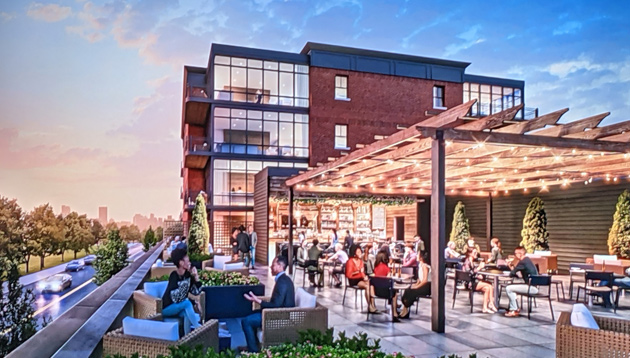 Some residents praised him for not simply proposing another five- or six-story blocky building like the ones that are now taking over much of Washington Street.

"We're not looking to a monster box building like the rest of Washington Street," Goodman said. "It's a modest box building."

By not building any new floors atop the current Doyle's building, Goodman also avoids any potential headaches with Stony Brook, which flows through a culvert under a small section of the building,

Goodman added that he is looking for a sort of upscale neighborhood market - of the sort you might expect in the South End or the neighboring part of South Boston - for the 5,000 square feet of retail space in the new condo building next to Doyle's

He added that he's looking at selling three of the condos in the building immediately next to Doyle's as affordable - which would meet the city's minimum 13% requirement if the six units across Williams Street are excluded. This proved one of the few areas of immediate contention, with some residents asking for more affordable units - one noted a local advocacy group had conducted "die ins" about proposals in other parts of Jamaica Plain to try to boost their affordable-unit numbers to 25%.

Goodman said he is facing a particular challenge with the project - because he would be trying to subsidize both the cost of the affordable units and the restoration of Doyle's and that he's not sure how much more he could afford. But he added it's still early in the process, that even if everything goes well, it could be 12 months before renovation and construction starts and 30 before the project is completed. 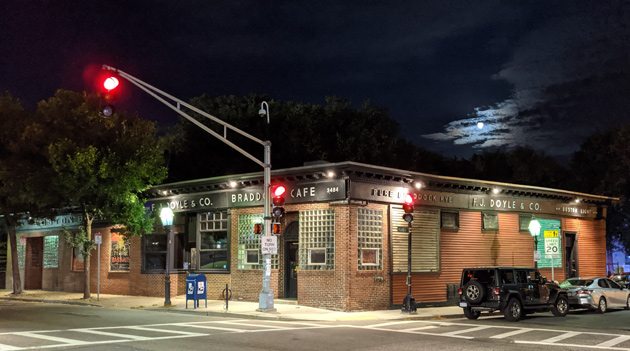 As a neighbor I think the

As a neighbor I think the project looks good. Brassica serves the best food in JP but I don’t think a potential restaurant that is 3 years out should be the selling point of a construction project.

The Boston Globe article said they are keeping parking spaces. That’s a lame nod to pathetic NIMBYs. Get rid of surface parking if that is what they are talking about . It is against everything cities stand for. This isn’t a lame suburb. People from outside JP can take the T. There is enough car traffic and auto pollution here.

This isn’t a lame suburb. People from outside JP can take the T.

I used to take the T to Doyle's. When it reopens I will make sure I drive.

Nothing nice to say and

Nothing nice to say and nothing to contribute. Must be awful to be such a spiteful person. Enjoy your hypothetical future spite driven drunk driving, try not to hurt anyone else.

Nothing Nice To Say? Drunk Driving?

The person making the statement above has called cops, who were a good part of Doyle's base all sorts of nasty names that decorum won't let me repeat here. Let's not think that Spokeboy is some saint.

As far as the drunk driving accusation goes, you know this place has (had) food, you know that right? Or did you just let the worst of your assumptions get in your head?

Go back to bed. We will all be better for it.

You're not doing anything to

You're not doing anything to raise the level of discourse, pal. You're just a fountain of spite and sarcasm. It must eat at you. Find peace.

And we all know how many of those degenerate Dunkies drove home from Doyle’s smashed out of their minds knowing they’re covered if one of their own pulled them over.

Your comedy is getting better. Can't wait to see you at Giggles or the Kowloon when things open back up for open mike nights.

Admittedly, I started reading Kinopio’s comment thinking “maybe he won’t be insulting of someone with a comment.” Once again, he lived up to expectations.

What, are you the lorax, only

What, are you the lorax, only for surface parking lots? How do you read that comment and take it personally?

But our resident anti-car troll, in raging against retaining a parking lot that most likely predates him, decided that the only people who should be able to visit Doyle’s are those who live nearby or are T adjacent. Mr. Costello merely noted the elitism of that point of view.

The plan is impressive. I

It doesn't take up the entire block

Like certain buildings we could name down in Forest Hills.

...though I'm cool with them keeping parking if it can also be the allotted parking for the condo building. I'm a pedestrian, so maybe I have this wrong, but didn't Doyles have 3 parking lots, on either side of Williams? Keep the one behind the building for the restaurant parking & deliveries, call the other one tenant (or tenant/restaurant mixed) parking, and at least there'd no net loss of green space or residential space. If they eventually build a second or third level of parking above the current lot, maybe the parking whiners will shut up.

John is right-- people have walked or taken the Orange line to Doyle's for years. A lot of the old guard may now live in Rozzie or Dedham and drive in, and sure, some parking for a restaurant as big as Doyle's is reasonable (and it is big, by JP standards).But most of the clientele is local.

Sounds like a very thoughtful proposal. I don't think it really needs 30 parking spaces, but otherwise, I'm a fan!

Aren't most people going to Little League or a soccer game etc parking at the field across the street anyway? Or are they going to be providing parking here for people to use that field even if they're not Doyle's customers?

I hope this works!

So nice to see someone picking up the torch! And as a former JP/Rozzie/WR resident now residing in the 'burbs, I will most certainly drive up and support the business. The so-called "Doyle's" down in these parts is a joke.
Peace/out

How many "stacker" system

How many "stacker" system spaces will there be?

Would this be a 2nd outpost of Brassica Kitchen, or are they planning to move the original location to this new location if this project moves forward?

If they are trying to keep the food "simple" at the new Doyle's -- then I really really hope they continue running the original Brassica separately.

I like this proposal. I like Watermark. They have been in JP for decades. They just built 40,000 SF of non-profit office space for a homeless operation, they redevelop old properties and fix them up, they like good design, they help their friends, community and neighbors. Too bad that you can't build up that corner. I personally don't care about bringing Doyle's back to its original look. And I can't wait for better food. I'm fine with sushi. Money is definitely going to be tight in 2021, both subsidies and private financing. So I hope the SNA and surrounding community take a chill pill and try not to extract too much from them. Let's just get it done in a reasonable timeframe for once.

Jamaica Plain landlord drops suit against Pine Street Inn apartment proposal
Window hit by gunfire at South Street development in Jamaica Plain
Election roundup: Council candidate pulls out of progressive forum; mayoral hopefuls gird for series of forums
Man charged with trying to kidnap young girl in Jamaica Plain after first picking her up and kissing her on the head
Resident rescued by ladder from fire on Boylston Street in Jamaica Plain; turtles also saved
In bloom at Jamaica Pond