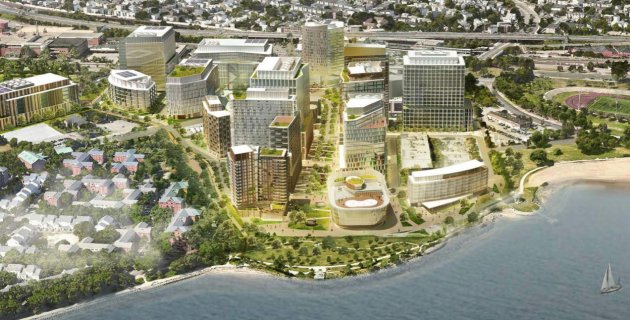 Kirk Sykes's Accordia Partners is proposing nearly 6 million square feet of construction, including 1,740 apartments, restaurant and retail space and some 4 million square feet of "office, research and development, life sciences and/or potentially academic uses" where the Bayside Expo Center used to be and where Santander Bank now runs a large check-processing center.

Accordia's proposed Dorchester Bay City, detailed in plans filed with the BPDA, would spread across 17 new blocks in buildings that could be as tall as 17 stories on the 33.5 acres of land it plans to lease from both UMass Boston (the parking lot where the Bayside Expo Center used to be, which UMass bought for a now ended dreams of putting up dormitories, or an Olympic Village, or a stadium for the New England Revolution) for a total of about $235 million and the large Santander Bank check-processing center across Mt. Vernon Street.

Accordia promises "a 24/7 community that embodies live, work, and play," one that will become "a dynamic hub for all Bostonians."

Accordia adds it is talking to other developers about adding onto property surrounding the site, to make the area even more of a new city in the city.

It is also talking to the city and state about how to create "a connected network of streets, sidewalks, bicycle paths, and pedestrian paths that span from the JFK/UMass MBTA station across Morrissey Boulevard and Mt. Vernon Street to Day Boulevard and the Boston Harbor." It is also planning for 2,650 parking spaces.

Accordia says it will also need help from the city and state to keep the whole place from simply becoming an extension of Dorchester Bay as sea levels rise and storms worsen due to climate change, most immediately by coordinating with the city on its own plans for measures that will protect large swaths of Dorchester and South Boston from similar inundation - in particular city plans to turn Moakley Park into a sort of natural sponge that could soak up large amounts of water to keep it out of the surrounding areas. Accordia adds it will raise the elevation of the site to keep waves away from buildings.

It is looking at building some of the units under the city's "compact" specifications, which allow for smaller-than-normally-allowed units in exchange for common spaces for residents and, theoretically at least, lower rents. Also:

The creation of co-living units – a concept where bedrooms and bathrooms are rented by individuals and common living spaces are shared – will also be considered to make available apartments at accessible rents and costs for entry (e.g., often these projects do not require first or last months’ rent payments at the commencement of a tenancy).

Across the two sites - on either side of Mt. Vernon Street - Accordia has proposed some 20 acres of open space, most of it accessible to the public. Accordia says the development will "celebrate the choreography toward Dorchester Bay" and that:

The future open spaces at the Project will transform the existing conditions at the Project Site into an entirely new destination within Columbia Point, with tree-lined streets, new open spaces, outdoor recreation areas, multi-use paths, connections to the Dorchester Shores Reservation, and opportunities for temporary and permanent displays of art works.

One urban design goal of the street layout is to create a cohesive yet varied grid of blocks and open spaces that will accentuate the views toward Dorchester Bay and bring the natural environment deep into the Project Site through the view corridors, open spaces, and pedestrian passages to be created as part of the Project (see Figure 1-15). These view corridors invite pedestrians, bicyclists and vehicles through the Project Site, connecting the Dorchester neighborhood to the JFK/UMass MBTA station, the Dorchester Shores Reservation, Moakley Park, Carson Beach, and the Harbor Point Apartments.

Will the detectives assigned there be Starsky&Hutch?

It will be the place to be

All That Plaid. So Much Polyester and Open Collars

I love that one of the writers of that song also wrote the ode to Derry; The Town I Loved So Well.

With your mullet and plaid....

It is 2020, why not more bad music and awful clothing!

This was literally my first thought...

This will be bigger than 17 stories. Unlike the Seaport, the FAA limit here is about 350' and at least one of the buildings, Parcel J, will be pushing that limit. It looks like 2 others should be close to 300'. For reference, the Seaport tops out around 250'-260' as it moves away from the water. So a few of these buildings will be noticeably taller, more like (new) Kendall sized, vs Seaport sized.

Like with every development in Boston these days, with this development we are all going to pretend that everyone will take the T, walk, or use bicycles.

Traffic at Kosciuszko Circle is already fubar. But it will be much worse.This will literally choke the city to death. (Granted things got a little better after covid struck, but it's currently returning to fubar)

This project doesn't even do

This project doesn't even do that. It adds 450 parking spots to what's currently a parking lot & creates multiple new roads.

They need to create less roads for cars and drastically reduce parking or even go completely car-free. Otherwise traffic in that area will be a standstill.

So? it should stay an open parking lot instead?

"should it stay an open parking lot?"

In my opinion, no. But this kind of massive development will guarantee a total traffic clusterfxxx. Not all development has to be huge. As a suggestion, ow about more 3 family houses with a couple of 10 story buildings?

Tunnel under the circle, add 17 bike lanes, a dog park and

a quiet fireworks dispensary. If you dig it they will come.

If one development is enough

to "literally choke the city to death", then frankly, the city deserves to die.

Personally, I think that humans are smart enough to find other modes of transportation if driving their own personal car becomes a bit too inconvenient. But I'm optimistic like that.

Maybe they are, maybe not. The fact that we American humans have an national electoral system that elects candidates that lose by 2.9 million votes may indicate we are not smart enough.

But it take more than smarts. Money has a lot to do with it, and politics. If we had a real, reliable, 24 hour, public transit system, maybe that's a start. But we don't have that, and this development , like almost all developments recently, just sweeps transportation under the rug. Call something "transit oriented" and like magic, all problems are solved?

With 2650 parking spaces, nobody is pretending people won’t drive.

What's the building in the front that looks like a tub of takeout food?
Please tell me they're going to call it the Taco Bowl.

Ah, wait for it, howz about

Ah, wait for it, howz about traffic and parking???

Two posts above this.

I'm all for it if they

agree to widen the road next to the Santander Bank where it bottlenecks into one lane for all of 20 feet before becoming 2 lanes again.
That area is a hot mess of roads. I would hope a project like this would call for a redesign of he roadways around it, especially if they plan on adding NEW roads in essentially a new neighborhood.

Go ahead and Build.

This is a once in 200 years opportunity. But PLEASE redesign the Circle, and build a dedicated busway from JFK T up and over Morrissey and down the center of Mt. Vernon.

This time (as opposed to

This time (as opposed to Seaport) can we plan a monorail or gondolas or something first, fer cris'sake?!

You will get a Wellington

I was hoping to see a dock as

I was hoping to see a dock as well.

Will need a lot of dredging.

Will need a lot of dredging.

An Incredible Amount of Dredging

Also, the people who don’t

Also, the people who don’t know why we can’t just have a Long Island Ferry. Dredging has gotten even more expensive in the past few years. I don’t even know if the Army Corp of engineers will allow an area to be dredged if it hasn’t previously been dredged.

It’s more of a Shelbyville kind of idea.

Add a parachute landing zone for the adventurous

How are the trains going to

How are the trains going to hold all these people? Actually the new normal is working from home so it doesn't matter.

When not crashing into exposed massive electronic switch

technology from 1973, the Red Line runs on time and handles volume well.

Will the streets be public?

Will the streets be public? I'm not down with gated communities or neighborhood associations or private security or any of that nonsense.

Also, any chance they tear up or at least reconfigure some of the dozen or so lanes of highway between the development and the JFK/UMass T stop? Let's make it easy for the occupants to ride please.

As a Dorchester resident, I say

they can build it if in exchange they remove all trace of Morrissey Boulevard.

Then you could actually refer to Dorchester as "Bay City".

How would you drive to BC

How would you drive to BC High?

(a) are Eagles, so they can fly to their little aerie

(b) think things revolve around it, so centripetal acceleration should have it covered 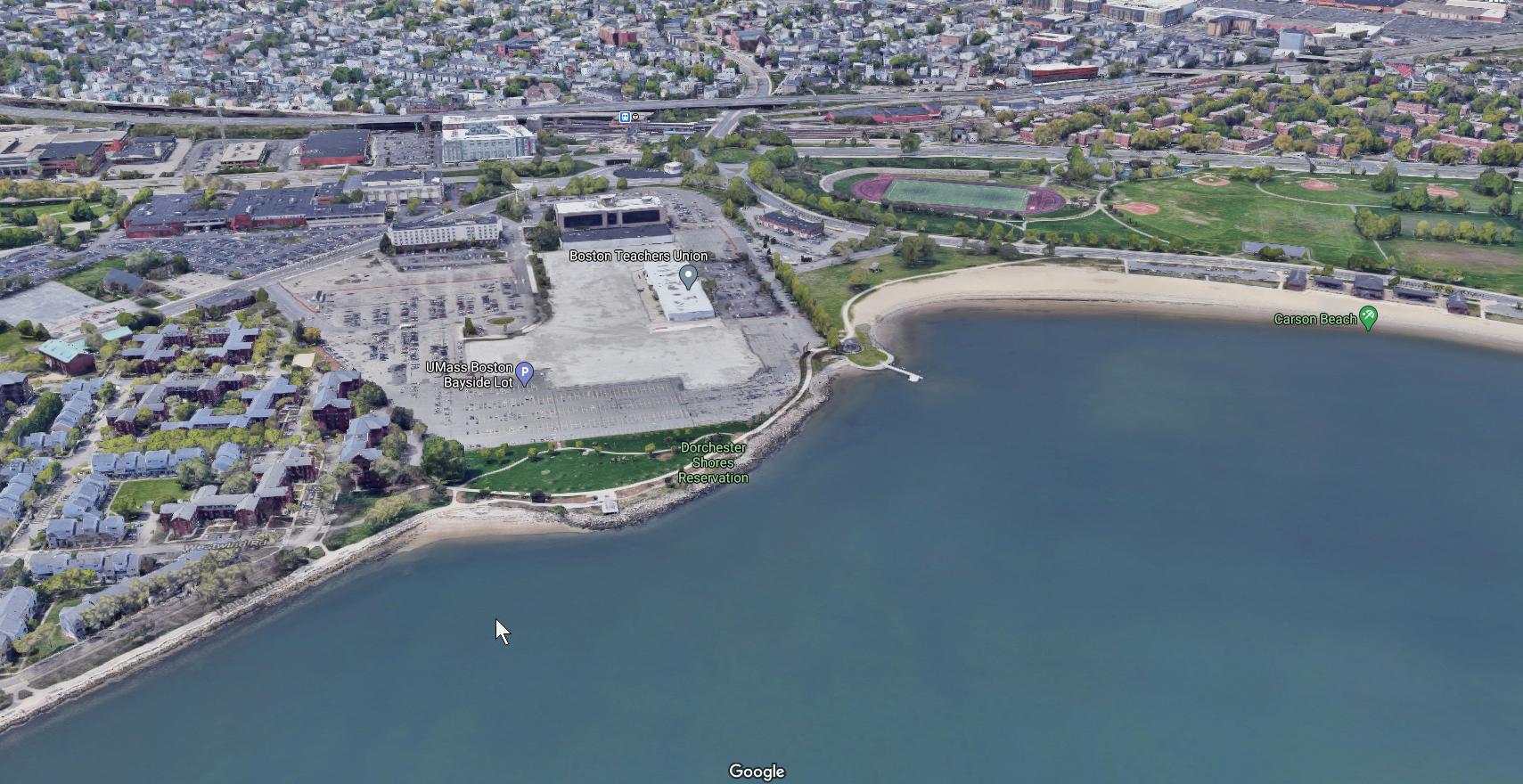 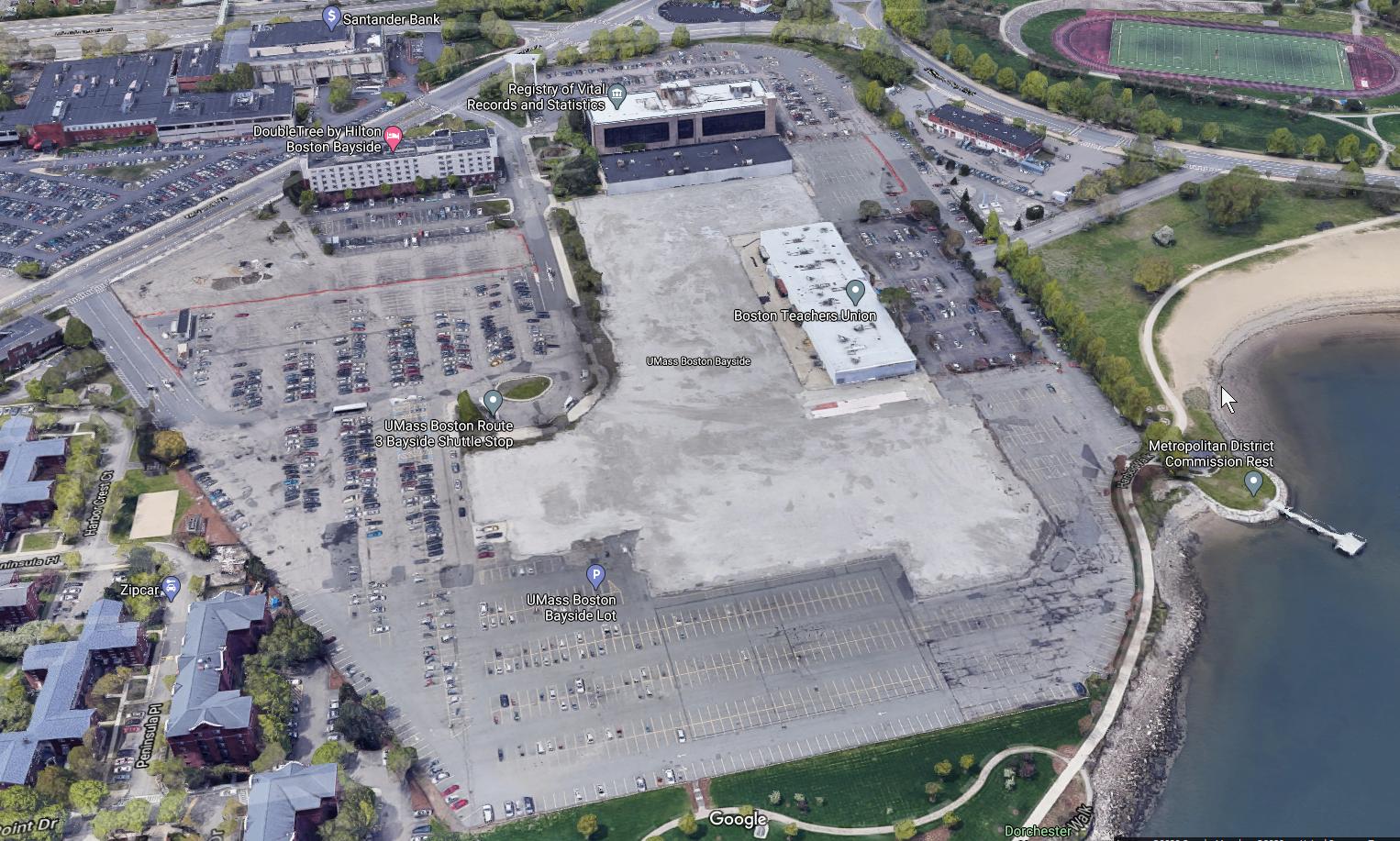 Man charged with beating and strangling pregnant woman in her own bedroom in Dorchester and attacking her one-year-old child
Fire erupts in three decker on Wales Street in Dorchester, spreads to neighboring house
Gun-toting teen from Brockton and three other Brockton pals were joyriding through Dorchester on scooters, until they ran a stop sign, police say
Taking flight in Dorchester
Another set of stairs at JFK/UMass shut as unsafe
Teen points loaded gun at cops and curses them out, runs away, found hiding under a car, police say