Developer proposes three-building complex on Fort Point Channel, including large berm to hold back the tides 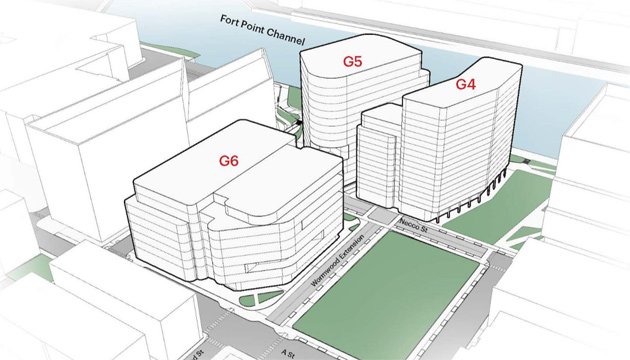 Related Beal yesterday filed plans for a complex on what is now a parking lot next to the Gillette plant that would include residences, offices and R&D space.

Also included in its filing with the BPDA: A large berm that could become the first part of a city effort to protect Fort Point and the rest of South Boston behind it from both rising sea levels and potential flooding that could come with the more severe storms that could batter the coast, along a waterway that already floods its surrounding parking lots and walkway at king tides and during large storms.

When not beating back the tides, the berm would be a wide walkway with a seating area along the channel. Related Beal says the berm, the exact design of which is yet to be decided, would be incorporated into a 50-year plan released by the city in 2018 to minimize floodwaters pouring into the channel through a series of berms, sea walls and even grassy dunes. Key to the plan is that all the pieces eventually be built; otherwise the water would just rush around whatever structures have been built.

Related Beal proposed a 17-story, 370-unit residential building, a 13-story, 332,000-square-foot office building and an 8-floor, 400,000 square-foot lab and R&D building on the 6.5 acre parcel, which it bought from Gillette last year. The company is also proposing a roughly 400-space underground garage.

The buildings will be placed to minimize their impact on the Ted Williams Tunnel, which runs under the parcel.

The company says that as part of the project, it would extend Necco Street to Binford Street and Wormwood Street across A Street, as well as create a pedestrian walkway from Necco Street to the Harborwalk. The Harborwalk itself is where Related Beal would put the new berm, but it says that will be designed to make it look more like a natural rolling area with walkways to the path at the top rather than a stark reminder that the area is right at sea level in an era of rising seas.

In addition to the BPDA and various city boards and commissions, the project will need the approval of state environmental regulators due to its location right on the channel.

Related Beal hopes to begin construction in late 2021, with completion in late 2024. When completed, the result will be "a vibrant, 24-hour, mixed-use neighborhood," the company says - despite being located in a city that has long resisted anything actually open 24 hours.

Okay this is a parking lot right now.

But at this point I'd love to see the data that says we need to build for this. Do we NEED more "R&D space" or condos?

Also, gotta love the "berm to hold back ties" but don't mind the 500 car UNDERGROUND parking deck that will be rendered useless during such flood. (Water table in this area is very low, and it floods VERY easily.. I worked across the street for 3 years. A little rain and it was puddleville)

But gosh for bid.. BUT PARKING. BUT CARS. Who cares about climate change? We're building a wall to help that. Nevermind we're going to add cars to local streets and create more green house gasses that caused the climate change in the first place.

My god the circular moroncy is silly here. How about ya don't build here?

Build a berm to protect this property, while contributing to the problem on a global scale.

Someone's getting rich off this. The rest of us pay.

But the berm should go from Winthrop to Hull

Cities must grow for the sake of the world

Building offices and housing in Boston is inherently good for the environment since it means the occupants aren't working and living in the suburbs.

Thats pipe dream and you know it

Ya think all these people are gonna work downtown and walk everywhere?

God no, They are gonna drive their BMW over the bridge to the Fin district to work and park in a spot over there.

Or work out of town.

It's a matter of degree

Of course they won't all, but that's the wrong metric, what matters is whether they'll drive less and that seems fairly likely. If they drive from Fort Point to the Financial District that's dumb but it's also a very short commute, so they won't be driving for very long. Even if they reverse commute out to the suburbs there's still a pretty decent chance they'll have a shorter commute, since commuting from the center of the metropolitan area to a suburb is shorter than commuting from one side of the suburbs to the other.

Bonus: those car-free streets become great pedestrian & bicycle paths basically overnight and could even tuck in a few bus lanes.

If you don't build it they can't drive it!

The most pleasant and

The most pleasant and environmentally friendly parts of Boston aren't built on top of 400-space garages.

If it's affordable housing

If it's affordable housing that is. People that can't afford cars need to be able to walk to a train, not have to take 3 busses to get to their job.

Attracting the type of people that live downtown yet still have a car for some reason is definitely not benefiting us as city. Especially since these people are still driving to their jobs next to public transportation!

I'm not convinced that the business case will exist to move this project forward in 18 months -- at least, not enough to get financing in place. Millennium Partners had to ask for modifications to the Winthrop Sq. project which included converting the condo part of the project to rentals.

Looking at the aerial view, it's a surface parking lot for around 400-500 cars RIGHT NOW. So adding cars to local streets? Nope. If a big chunk of those garage spaces are allotted to the condo owners, there will probably be somewhat less traffic as a fair number of those cars don't get used to commute - they're more for shopping trips and weekend getaways. I'd also presume that over the 50+ years these structures will exist, most cars with internal combustion engines will have been replaced by electric vehicles. (That said, owned parking spaces may become less valuable if autonomous taxis become the predominant mode of transportation for most trips.) If the builders/architects can't design effectively to keep the garage from becoming a giant salt water cistern at high tide well that's on them.

I mean, I'd say don't build there because I think that demand for office and residential space in the City is about to crater. But absent that it's reasonably well-located for access to public transit (5-10 minute walk to South Station, 5-10 minute walk to Broadway, on the 11 bus line) and 700,000 sq ft of office/lab space would need way more than 400 parking spaces if all workers drove.

I guess we can build nothing and hope that jobs and people move away. That has worked well for Detroit.

Looking at the aerial view,

Looking at the aerial view, it's a surface parking lot for around 400-500 cars RIGHT NOW. So adding cars to local streets? Nope. If a big chunk of those garage spaces are allotted to the condo owners, there will probably be somewhat less traffic as a fair number of those cars don't get used to commute - they're more for shopping trips and weekend getaways.

That's a huge assumption without ever having 1 tenant.

Keep dreaming, these folks are gonna work in huge office parks in BURLINGTON or NASHUA because its too expensive to rent offices in boston. Just as Fidelity or State Street...

Keep trying to justify cars in the city.. keep on keep on

Circular moronacy.. its a thing.

Just more would if they lived there as opposed to if they lived in, say, North Andover or Acton or Bellingham or Duxbury. For a married couple, yeah, one might be driving to a job in the 'burbs while the other walks/cycles/uses transit. But that's still likely better for the environment than one living in Winchester and driving to the Financial District, with the other driving to Nashua.

Big employers (like Fidelity and State Street) were moving jobs back into cities because the young employees they wanted to attract liked living in cities and didn't want to have to commute. There's a big State Street building across the street from this project. Whether that trend continues post-Covid is an open question.

I will say that any new garage project should be required to have EV charging available at all spaces -- or at the very least, be ready to implement EV charging with minimal additional construction.

Good location - plenty of potential for transit-related development. Branch-off from the Red Line at the mezzanine level at Broadway Station, build a new light rail tunnel under A Street, have a portal to the surface at Melcher Street, and they can merge onto the old Summer Street streetcar rails to get to South Station.

Only a billion or so to replicate the 11 bus?

Replicate? No.
-
For maximum disruption and minimum benefit, I'd terminate the 11 at B & 4th Streets, making people walk three blocks to Broadway Station, AND have to pay a separate fare!

There are so many other things you could do with that type of money.

Exhibit A: Orange Line extension to West Roxbury (and Green Line D branch to Needham Junction/Hersey). This frees up space on the SW Corridor and makes frequent electrified CR service possible - both to Providence via the NEC, as well as South Coast Rail via Canton/Stoughton.

Or they could just bring back

Or they could just bring back the South Boston extension of the CT3.

won't hold 40 years... The water is already in the Gillette parking lot on a spring tide. But then again the transient nature of the city's inhabitants is greater than the transience of liquid. Abandoned dead towers by 2040 and demolished by 2050.