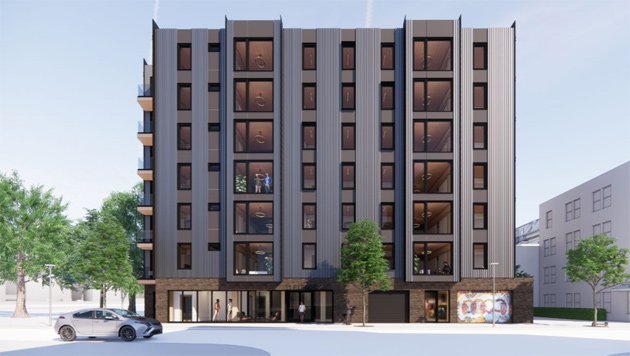 Two developers have filed plans with the BPDA for a seven-story, 34-unit apartment on what is now a parking lot off East Lenox Street, near Washington Street.

Boston Real Estate Collaborative of the South End and D2 Development of Roxbury, which have spent the past ten years rehabbing empty or "failing" buildings in the area, plan a building with columns, beams and floors built with "cross laminated timber," which they say would shorten construction time, reduce the building's carbon footprint and allow for more energy-efficient units. Most recently mid-sized residential buildings in Boston have consisted of wood framing atop a concrete base, or "podium."

While CLT is a wood-based material, it has greater fire resistance properties than steel or concrete due to the char effect that allows it to maintain its structural integrity, versus simply failing. This coupled with increased seismic tolerance results in a building that is overall better looking, and safer.

They say they will couple this with more efficient HVAC systems and appliances and rooftop solar panels. Also:

The design seeks to be a holistic representation and manifestation of its sustainable vision, a future case study as an urban low-carbon Passive House multifamily development.

"Passive House" is a design goal, normally for single-family homes, in which the design, coupled with high-efficiency heating and ventilating systems, dramatically reduces theb building's need for outside energy for heating and cooling.

The building would have eight parking spaces in an indoor garage.

Yes, before everyone has a bird about the Orange Line being nearby and Spokeboy and Spinboy demanding that we only be pedestrians or velopedians, an indoor parking space in the South End / Lower Roxbury is retail $100,000+ or a lot with less construction costs than a residential space in part of a building that requires Amazon lockers, elevator equipment, sprinkler room, electrical room unit storage, mechanical space, and other building support errata, that leaves little curb appeal for a unit.

That is quite a run in sentence.

Are you saying there should be more or less parking?

he seems to be saying that lodging for auto-residents costs less than lodging for humans, or generates more revenue. I don't know why that would be relevant.

Can You Count To Over 21 or 22 Without Being Naked?

It all depends on the number of fingers and toes plus other anatomy that sticks out of you which you have depending on your gender.

Ground floor units in these buildings aren't as desirable as floors up above.

Much of the ground floor is taken up with support systems for the rest of the building. That makes ground floor units in buildings like these (rectangular) not as attractive as upper floors.

A developer knows it makes more economic sense that parking is worth more in the building to benefit the other units and it makes it less sense to place a unit in the back facing an alleyway.

I guess you can't see the obvious. Try harder next time. You would be a terrible real estate developer. You just sneer at the parking in the proposed building not realizing that units are being added over an existing parking lot, thereby more housing is created where there was none.

Mathanasium can help. There are locations near you.

What point are you trying to make?

I’m not sure if you reviewed the project application that Adam linked but there are no rental units proposed for the ground floor, which will only house the lobby, mechanical room, amenity space, bike storage, and yes, parking. Are you saying there should be more or less parking on the ground floor, or on a different floor level, or what? For what it’s worth the building systems take up a small portion of the ground floor, so the developer could add rental units on this level, much like the thousands of garden level apartments in this city; not that I’m saying they should (they obviously did the math and went with parking) but I’m not sure what you are saying either.

I think the confusion here

is you started arguing against something that no one had said yet (namely that 8 indoor parking spaces were too many, I guess?). You might want to wait until someone says the thing you're mad about before you go off about how they're obviously wrong for saying it.

This chain is a textbook example of...

And that was after trying to earnestly understand any points provided.

Our fault for trying to decipher that opaquely-clever message, I guess.

There are no ground floor

There are no ground floor units. There is also no basement. If you look at the floor plans, I don't know where you would put more parking. The only optional thing on that floor is the bike room, but that would only yield one more space. The ratio of parking per apartments is very low in the SouthEnd. I know that makes each parking spot very valuable, but you are also presuming alot about the builders goals. The "betterment of the Washington Street corridor" is not luxury housing. Passive building standards are all about reducing energy usage. I think that is why the parking spaces are only 8.

This area has a lot of

This area has a lot of parking lots and vacant parcels like this that clearly used to have buildings on them at one point in time. It makes it feel like a bit of a wasteland in places. More development like this is good. Hopefully it will make the neighborhood feel a bit more complete once again.

The proposed interchange between the SW Expwy and Inner Belt would have been on the Dudley/Nubian side of what is now Melnea Cass Blvd. There were already vacant lots in that area in the 1960s; you can see this in aerial shots in this presentation from the City https://www.cityofboston.gov/images_documents/MCBDP%20DRAFTrev12.13.2011...