Driver slams into Jamaica Plain market; fireworks might have been involved 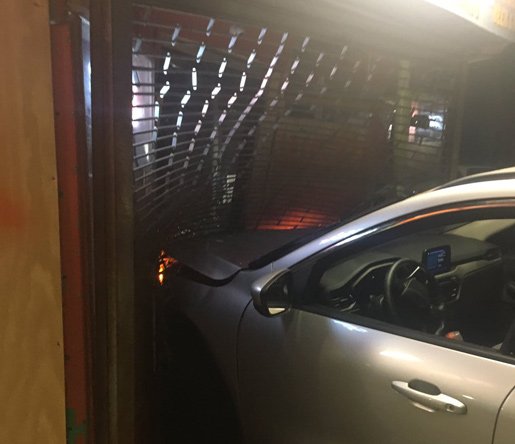 Around 11:20 p.m., residents living in the area of Centre Street near Creighton and Wyman streets heard what sounded like a simultaneous car chase and gunfire.

And then, a crash, as one of the possibly several vehicles involved wound up embedded in the front entrance to Pimentel Market at Centre and Wyman streets.

Police responding to the scene found no driver and no evidence of gunfire in the path the SUV and the other vehicles took from down Centre towards Columbus Avenue - so one possibility is that people in the cars were throwing fireworks at each other. Some fireworks remains were found on Centre.

One resident near Creighton reports seeing four or five vehicles, at least one with New York plates, come "screeching down Centre Street." He adds: "I don't know if it was a chase or they were racing, but I heard some sort of crash further up Centre Street and screeching tires so whatever they were doing they were flying. They all tried to fly down Creighton and one went straight into Pimentel."

Not long after the crash, police responded to a report of gunfire a few blocks down Centre at Lamartine - which turned out to be more fireworks.

The fire department responded to the market as well and determined that the car did not do any structural damage to the building.

The fireworks were blasting

The fireworks were blasting all afternoon and into the night between Bromley Heath and the laundromat across the street. This is a large amount of fireworks. Guaranteed it won't stop. Come bring your picnic baskets and coolers and blankets down Mildred Hailey Apts AKA Bromley Heath for free fireworks display. Just don't get hit.

Anyone who is caught with

But you do either need a car to get to New Hampshire to buy them or a friend with a car - or buy them locally at a markup.

I don't think further victimizing the poor is the answer, though. It might help if there were some enforcement of who ends up "moving in with grandma" for a while. Evicting people working two jobs because a "helpful" relative moved in or an adult child moved home doesn't solve these issues.

Should have a warning label

Starts in fun, ends in tragedy

Count your fingers, and treasure the memory

Can you hear? These will take care of that!

Go ahead -- put somebody's eye out

These will impress everyone with your ability to make bad decisions

If only I could show them what it looked like when I saw a kid literally blow his hand off with an M-80.

Or maybe tap the memory cam of a firefighter dad with kids on my swim team who was working as a licensed pyrotechnician when he got blown up (mortar round went off in the tube).

The problem is that people don't think it will happen to them.

No longer a novelty

These fireworks are no longer a novelty. There were cops and full on firetrucks at Mildred C Haley yesterday around 4:30PM because folks continue to set them off even in the daytime and one caught a mechanical type of building on fire. It is out of hand and nerving. We should have gone the other way on the Corridor to recreate, but no, I didn't think twice about going to Jackson Square. Unfortunately, the divide will only get bigger if these fireworks are to symbolize our civil unrest right now. And now the car running into a store on Centre Street in Hyde Square over night!?

Thank you Mayor Walsh for

Thank you Mayor Walsh for keeping all streets open to drivers! Why close them so that restaurants can have patios or pedestrians can have room to social distance when you can keep them open to drivers who race down them while throwing fireworks and/or firing guns? Common sense prevails! If people wanted to be respected by the mayor then they should have been born an SUV.

I’d rather hear more from the

I’d rather hear more from the kids setting off the fireworks than you, the irrational bicyclist. That’s how annoying you are.

I’d rather just hear the fireworks honestly than your diatribe. That’s how annoying you are.

Calling out city leaderships lack of tackling road violence and providing safer places for people to walk, gosh how annoying!

Seriously, did the ghost of Jeremy Clarkson possess you last night?

I’d rather hear more from the kids setting off the fireworks than you, the irrational bicyclist. That’s how annoying you are.

I’d rather just hear the fireworks honestly than your diatribe. That’s how annoying you are.

Yeah, these two drivers throwing fireworks are the majority, and the thousands of drivers just trying to get to work or the store are just background noise and their needs can be ignored.

Can Pimentel catch a break?!

Can Pimentel catch a break?! :(