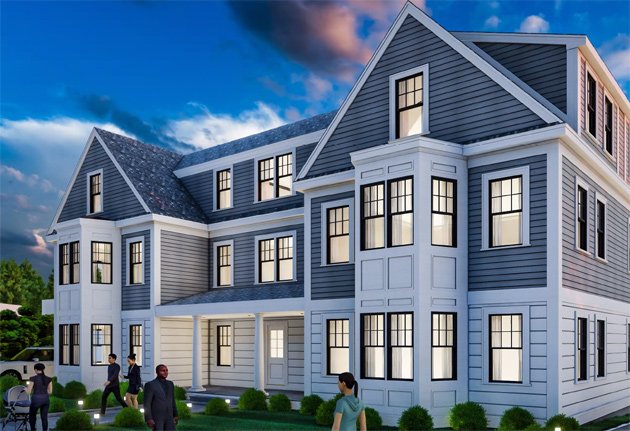 A Roslindale developer is proposing to replace a three-story house turned office building at 4 Anawan Ave., just off Belgrade Avenue with an eight-unit condo building with eight parking spaces.

The West Roxbury Neighborhood Council's zoning committee voted tonight 4-2 to support Aponte Development's proposal, which will ultimately need approval from the Zoning Board of Appeal because it is denser than allowed by the lot's zoning, doesn't have enough parking under zoning and has three stories rather than the 2 1/2 allowed under the code - although it would be no taller than the building it would replace.

Council members praised the design, in particular that it is not just another big box of the sort going in along Belgrade Avenue but is rather something that actually would fit in with the rest of the neighborhood. The members who voted against, as well as some neighborhood residents, expressed concern about parking - the lot's zoning calls for 16 spaces for a building that size .

Aponte partner Andreas Hwang said his experience putting up other buildings in Roslindale in recent years is that few people who move into them have two cars. He noted the building would be just a short walk to a Needham Line train station, is around the corner from a bus stop and has easy bike access to Forest Hills. Hwang acknowledged that with Covid-19, fewer people are using public transit, but added, "by the time this is built, I hope the pandemic is past."

Council member Mike Hajjar said Hwang could solve both the parking and density issues by reducing the number of units to six. Neighbor Anna Papadopoulos, praised the design but asked why Hwang couldn't put in more parking in an underground garage.

Hwang said he looked at a garage but said garages are expensive and that one for this project would have made it prohibitively costly. He continued that it's not like he makes mountains of cash from eight-unit buildings. "We make a living, we do OK," he said, but "it's not a huge windfall."

Nearby resident Evan Judd supported the proposal and said he moved to the area specifically because of the train stop and bus lines, which meant his family of three would only need one car. He predicted people who would buy one of the condos in the new meeting would do so for similar reasons.

That ugly pile of shit doesn’t belong on Anawan.

More housing for rich white useless a-hole on bikes complaining about gentrification after moving to the city a year ago.

Please go on about how racism

Please go on about how racism is acceptable if it is you being a bigoted against certain ethnicities moving into a neighborhood.

Glad to see the 'more parking' crowd is in the minority.

Someone in Adam's article suggested underground parking. This added cost would likely make the project unfeasible. I therefore read this cost comment as a point against adding that feature.

Yeah, I didn't think it was necessary to spell everything out. Switching from surface parking to underground parking would cost more than an entire unit of housing. It's a foolish suggestion.

That development cost gets

That development cost gets packaged into the units meaning higher condo prices/condo fees and less affordability.

What a relief to see a well

What a relief to see a well-designed exterior.

I can't wait until we can

I can't wait until we can just live in the architect's rendering, soon I think.

No building will ever be acceptable to these people

All these public comments blur together:

Apartments are going to lower our property values and cause gentrification.

It's going to be too expensive for regular people, but it's going to draw a Bad Element with affordable housing.

My definition of "affordable" isn't the definition the city uses - these are still too expensive. No, I don't want very-low-income housing in my neighborhood.

I love the idea of supportive housing for the formerly homeless, but where will they park?

Nobody really lives in these empty investment properties, and I'm worried about crowding.

It needs more parking, but will simultaneously bring too many cars to our street.

It only attracts "childless transients," and also all those kids will overwhelm our public schools.

And then the kicker of "only rich people ride bicycles and/or take the train" which is just demonstrably untrue.

The neighborhood was perfect

the minute I moved in here and at that point the entire thing should have been locked in stone and not allowed to change in any possible way (unless the change directly benefits me and no one else).

8 parking spaces is MORE than

8 parking spaces is MORE than enough. 16 is just insanity. I think a lot of people don't realize that the parking minimums in the zoning code are often not based on any actual science or on actual car ownership rates of the neighborhood. They're basically just made up.

The design looks quite nice. Much better than a lot of the other bland proposals that we see.

Great point... but why is it that everyone is more concerned about parking than this even being affordable? Let's truly pause and consider... roslindale is nice and all but everyone is so comfortable in this tiny bubble of privilege. If Roslindale is truly about what we say it is we need to CHANGE THE NARRATIVE! The average young professional must work two to three jobs to even afford this. This is a problem not only here but city wide. What are we doing as a community to truly make sure that people can afford to live and thrive here especially during pandemic? Please check your privilege before you respond.

So to be clear, you have no suggestions?

You've made it clear what you think about your fellow Roslindale residents, but what's your specific solution?

Vienna style social housing would be interesting but would require action at the city level, a city run by a mayor backed by developers/construction unions. If you have a plan to split those two apart and sell the union guys on social housing, let's hear it. I'm going to vote for Wu when she runs but there aren't a lot of levers to pull. Should I rent out my house at cost to a qualified poorer person and just move out of the city?

There will also likely be a big market correction as the full trickle-down effect of work from anywhere sinks into the region. Housing will be cheaper in 2 years after some amount of people who don't need to live here realize they'd rather not and telecommute and others leave who no longer can afford the current costs as jobs supporting higher ed evaporate.

We're building more housing. As we've seen with rents, since demand has dropped, so have prices. The same thing happens when we increase supply. If we build more housing in a neighborhood, all housing becomes more affordable.

What is the car ownership rate in this part of Roslindale? Remember, you think that this should be a factor in determining how many parking spaces should be required.

I had a little trouble

I had a little trouble finding this information, but in 2015 it was 1.31 vehicles per household on average for Roslindale. 16% of households have zero cars.

I do not think in general that the City should be setting minimums on parking spaces. Developers and home builders know what people want, and they will not build something that they cannot sell. Providing parking, especially on small plots of land where building underground parking doesn't really work or make sense, ends up taking up what would otherwise be usable open space with trees, plantings, patios, etc for people to use. I think it's fine to use some space for parking, but we really don't want it taking up too much space on a site.

But parking ratios shouldn't be dictated by what car ownership rates HAVE BEEN but more on what it SHOULD BE.

Just because someone has lived in the neighborhood for 50 years and owns 4 cars doesn't mean that should be the requirement.

If you want to discourage car ownership, you build less parking. Yeah, initially, you might get a few people who move in with more than one car but eventually, they'll get sick of having to deal with street parking and condense to one car.

The only way to guaruntee someone moves into the neighborhood with 2 cars is to provide 2 parking spots.

Where are the save the neighborhood people?

Who is really behind this project?

Is it secretly profitable to out of state interests?

What about the floor to area ratio?

Will there be enough permeable green space?

Will the proponent fund a traffic study?

Will the proponent fund a second traffic study after I dislike the conclusions in first one?

What about the children? How will they cross the street?

Have they secured a commitment from the MBTA to allow additional boarding time due to increased demand?

How can we be sure more people than expected don’t live there?

Will Mike Rush sponsor legislation to remove a tenth of the lot?

Why can’t this be senior housing?

Traffic is bad at the bridge near Cleary Square.

They say residents will take public transportation. How can we be sure they won’t sometimes drive?

Right now the mayor has no stance, and will listen to both sides.

It’s zoned residential. How can we allow residences to be built in it?

What if they try to buy the property next door?

What about the safety of our children?

Will the BZA vote on this project in fewer than 400 days?

Will old people yell till they’re red in the face?

Couldn’t they just look somewhere else in the city? There are perfectly good lots out on the VFW.

What are the salaries of the developers building this project?

What will happen to the suburban character of our city neighborhood?

What if the residents knife people like other people have done elsewhere in the past?

How can we be assured this project wouldn’t be filled with people from other neighborhoods?

Will Matt O’Malley condemn the project due to traffic concerns?

Why can’t the NTB buy it and turn it into beautiful vacant blight consistent with the existing neighborhood aesthetic?

Because it’s 8 units not 560 students and 150 staff. And the developer here has been transparent and not lied

There is so much parking on

There is so much parking on Anawan the "not enough parking" is ridiculous.

Drivers, pedestrians, bicyclists get to share in angst from Orange and Green Line shutdowns
The four-way race to replace Sonia Chang-Diaz in the state senate
Thunder? Lightning? Could those mean, gasp, rain?
Developer proposes five-story residential building on Roslindale/West Roxbury line where charter school was once planned
Citizen complaint of the day: Chicken crossing the road in Roslindale
Possible last call for tiny Roslindale bar seeking to sell its liquor license to some planned Seaport joint