Eversource wins approval for new Theater District transformers, but with warning to clean up its properties elsewhere in the city 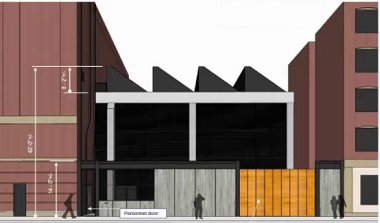 The Zoning Board of Appeal today approved Eversource's plans to replace a parking lot next to its Warrenton Street substation with two new transformers - with room for a third - but only after board Chairwoman Christine Araujo told the company it needs to do something about the sad state of its properties elsewhere in Boston, in particular in Roxbury and West Roxbury.

At a hearing this morning, a company lawyer said the new substations would be "a vast improvement in curb appeal, esthetic appeal," because it would replace the barbed-wire-topped chain-link fence now there with more aesthetically soothing panels.

That's nice, Araujo said, but maybe the company could also do something about the sorry state of a substation on Harrison Avenue in Roxbury, where panels aimed at shielding the facility from the public eye have come loose and now simply flap in the wind, exposing the chain-link fence they were meant to ameliorate. She also pointed to an Eversource installation at the Roche Bros. parking lot in West Roxbury, which at least has some shrubs, so a bit more of a "respectful presentation to the community," but not really enough.

John Zicko, director of capital projects and engineering, who has worked for the company since its Boston Edison days, thanked Araujo for raising the issue. He said the company tries to keep up its properties, but it just has so many of them across the city that it's hard to watch over them all and so he's grateful for observations such as Araujo's. He pledged to take a look at what the company could do, especially on Harrison Avenue.

Speaking of Eversource, how

Speaking of Eversource, how come no one is pushing them to explain what happened last Thursday night when several neighborhoods (portions of Back Bay, South End, all of Fenway & Kenmore Square) lost power for ~45 minutes?

Here: Sounds like they were installing equipment to make it easier to isolate and fix outages stemming from problems at the Scotia Street transformers and the process, um, caused an outage.

So basically, nothing will happen

So the ZBA Chair "told" the Eversource rep to clean up their properties, and the company man "pledged to take a look at what the company could do."

In other words: there is no enforcement of existing laws and regulations. There are no new requirements. And, as before, there will be no consequences.

It's good to be a "corporate person!" You can pollute, flout the laws, evade taxes, earn a guaranteed profit, and ignore your obligations.

We need our elected officials and our unelected bureaucrats to ENFORCE ACCOUNTABILITY. This is depressing.

Just like protesting against Trump in front of the State House thinks it makes you look good, but actually the people you want to get on are at the O'Neil and JFK buildings, if you want to hammer the utilities, start bugging the State's DPU. 617-305-3500.

Remember, just like Marty Walsh has nothing to do with the fare gates at Davis when they are broken, but somehow people tag him on twitter about trash near the Johnny D's site, the ZBA really can't do much about utilities.

Make noise. Get heard. Somebody will get off their arse and do something, but the utilities won't do jack unless the pressure comes from the state.

Maybe more people should take civics rather than use all caps.

I have been by there hundreds of times and maybe 3 of those times I even noticed that the sub-station was there. There are ugly houses that I notice EVERY time, but that sub-station - while not "attractive" - is just quietly doing it's thing and not really bothering anyone.

How does this make economic

How does this make economic sense? I'd think they'd make a boatload of money putting housing or offices above the transformers, and retail in front of them.

This site is the actual

This site is the actual birthplace of Edgar Allan Poe.

The Eversource parking lot on Warrenton Street goes through the block to the next street,
so it also has the address 62 South Charles Street. This used to be named Carver Street and Edgar Allan Poe was born on January 19, 1809 at 62 Carver Street. (It was in the Theatre District even two hundred years ago, and his parents were theatricals.)

There are at least two plaques nearby in the area about his birthplace, but neither is on the actual location.

Just go along to get along. How about a deferral, and come back in six months after you clean up the eyesores. The ZBA can pressure people at will, when they choose to do so. Never any discussion about the Zoning Code or hardship, just follow ONS and a Councillor or two.

Chinatown dumpling place closing its doors forever at the end of the month
Gunfire outside the South Street Diner
Providence man convicted for kidnapping woman outside a Theater District club and killing her
Diners on Hudson Street in Chinatown could soon have three new options for getting a drink with their food
Lawrence man identified as Chinatown rape suspect
Man stabbed near the Chinatown Gate; suspect arrested