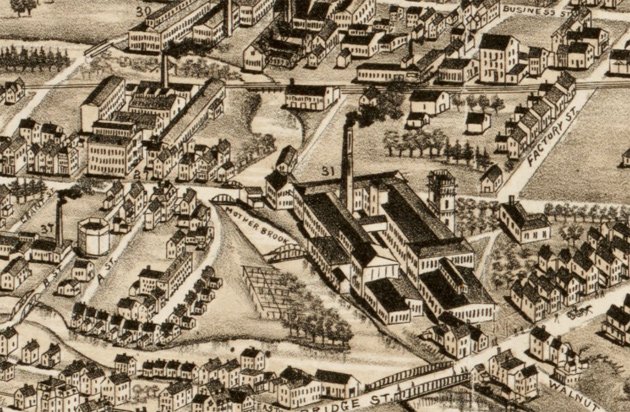 The federal EPA is considering whether to designate the Neponset River from Hyde Park to Lower Mills as a place so polluted it requires federal funds and expertise to help clean it up.

The Neponset, from its confluence with the Mother Brook in Hyde Park to the Lower Mills dam, "contains sediment contaminated with elevated levels of polychlorinated biphenyls," according to the EPA, which is holding a public meeting on possible Superfund designation at 6:30 p.m. on Monday at the Mildred Avenue Middle School auditorium, 5 Mildred Ave., in Mattapan.

State environmental officials actually asked for the designation for the 3.7-mile stretch of the Neponset, one of the oldest industrial waterways in the US, along which mills were built after Dedham authorized a tax to build British North America's first canal in 1639 to power a town grist mill. Factories followed, making everything from chocolate to industrial centrifuges.

Some of the factories along the Hyde Park stretches of both the Mother Brook and the Neponset dumped PCBs into the water. In 2007, the state diverted the Mother Brook where it flows under Hyde Park Avenue to clean up PCBs in that area - and end their continued flow into the Neponset (the cleanup then led to a lawsuit only settled last year on which of the current landowners had to pick up the bulk of the costs for the work).

The paper mill in 1890, with its dam and impoundment behind that (from the BPL's Norman Leventhal Map Center): 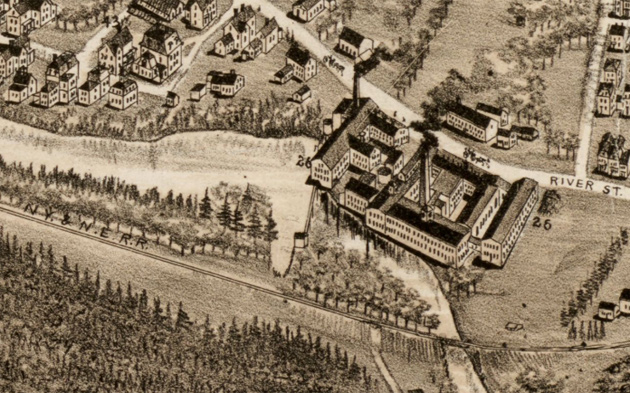 Lack of environmental oversight now will cost billions in the future.

People weren't fools 100 years ago. Plenty of writing of that time made it clear they knew the pollution was serious and harmful.

So they figured any damage was OK so long as the workers got paid and owners got rich. Turns out those workers ended up dying early due to affects of all that pollution anyway. And 100 years later we're still stuck with a huge mess which will cost current tax payers millions.

So remember that when you hear idiot politicians talking about loosing "job killing" EPA regulations. The only people who benefit are the tiny minority of owners and shareholders who won't be affected by the pollution and will stick the bill on the next generation of suckers.

They STILL haven't cleaned up the mess they've made in western MA waterways but sure, lets give them tax breaks and civic

Of course the person who was both involved with stalling the water clean-up AND moving to Boston, one Ann Klee, now works for Shirley Leung's boss at Suffolk Construction. Small world we live in it seems.

GE is cleaning up its Western MA mess

The feds finally forced them

The government compromised. It's hardly a victory.

There's only one problem -- the stuff dumped into the Neponset in the 19th C was not the stuff that is polluting it today.

Go into your local chemical supply house in say 1885 Boston:
Excuse me sir do you carry polychlorinated biphenyl compounds
You would get a response similar to your having asked if they remember what Armstrong said when he stepped onto the Moon

Those kind of volatile organic compounds not only were not in common use -- they didn't even exist in that time frame.

PCB's typically ended up polluting local bodies of water because they leaked out of old electrical equipment such as transformers. By the way there is no evidence that any of the workers died early from contact to PCBs. Being oily they didn't dissolve in water just deposited on the bottom or banks of a stream. The main problem with PCBs are that they are very stable and so mostly they just move around -- you have to use a high temperature incinerator to get rid of them.

What Are PCBs?
PCBs are a group of man-made organic chemicals consisting of carbon, hydrogen and chlorine atoms. The number of chlorine atoms and their location in a PCB molecule determine many of its physical and chemical properties. PCBs have no known taste or smell, and range in consistency from an oil to a waxy solid.

PCBs belong to a broad family of man-made organic chemicals known as chlorinated hydrocarbons. PCBs were domestically manufactured from 1929 until manufacturing was banned in 1979. They have a range of toxicity and vary in consistency from thin, light-colored liquids to yellow or black waxy solids. Due to their

PCBs were used in hundreds of industrial and commercial applications including:

Commercial Uses for PCBs
Although no longer commercially produced in the United States, PCBs may be present in products and materials produced before the 1979 PCB ban. Products that may contain PCBs include:

The PCBs used in these products were chemical mixtures made up of a variety of individual chlorinated biphenyl components known as congeners. Most commercial PCB mixtures are known in the United States by their industrial trade names, the most common being Arochlor.

You're right, they weren't dumping PCBs into local rivers in the 1850s. But they were dumping all sorts of other awful stuff. I think the point is that local waterways have been having stuff dumped into them for a long time and it's only been the last, oh, 50 years or so, that we've actually managed to make them cleaner.

I thought Mother Brook was

I thought Mother Brook was only the short man-made section in Dedham, made to connect the Charles to the Neponset to ensure water to those mills. How long are the artificial and natural sections?

Basically a ditch was dug in

Basically a ditch was dug in 1639 that connected East Brook to the Charles River. This allowed the Neponset River which was higher to flow to the Charles and power a grist mill. So it has been there almost 400 years! https://en.wikipedia.org/wiki/Mother_Brook

Mother Brook Canal: Still Useful After All These Years
https://www.newenglandhistoricalsociety.com/mother-brook-canal-still-use...

Yes, what he said

The original canal didn't actually connect the Charles all the way to the Neponset - it went from the Charles River to East Brook, a Neponset tributary that started about where the entrance to the Dedham Mall off Washington Street is today. But nobody calls it East Brook anymore - it's now just the Mother Brook from the dam on the Charles (which you can take a look at after you parking in the small lot there) all the way to just before Dana Avenue, where it flows into the Neponset.

Always have to be careful with the term Superfund

The label brings both positives and negatives to each community.

You think Menino might have been able to do something about this when he was the boss, it is in his neighborhood basically .

How does this affect?

The stretch from the Boatyard to the Old Neponset Drive-In site? There's was some good fishing there.

Member of violent Dorchester gang gets seven years in federal prison
Dot Ave. to be shut between Freeport and Gallivan on Saturday
Dorchester brawl ends with car chase, two arrested on gun charges, one of them just 16
After gunfire off Norfolk Street in Dorchester, man ran away from officers with a gun in his hand, but was captured, police say
Teen jumps in front of Red Line train at Shawmut, is pulled out alive
The Expressway signboards warn of traffic trouble between 1 and 3 p.m., but ...