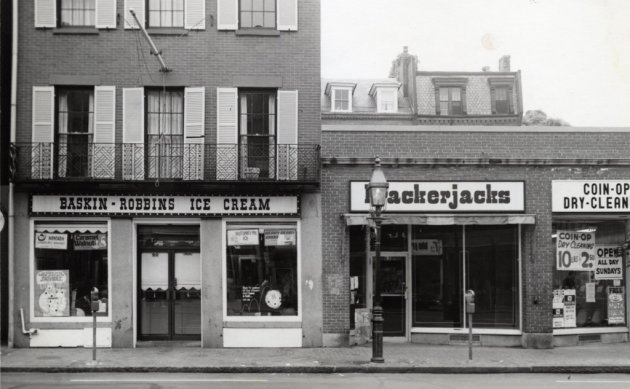 I was a regular customer there in my college days.

Harvard Square. Too easy with the Krackerjacks

The City of Boston Archives doesn't normally post photos of things outside of Boston.

Apparently they turned into a

Scene of the ice cream wars

Weirdly I can’t find a story about it online, but that was the scene of the 1970s “Charles street ice cream wars” in which one competitor died while attempting to firebomb another competitor’s ice cream shop

Whoa. This is a story I want

Whoa. This is a story I want to hear!

He accused the other guy of breaking into his shop, says the lock was "jimmied".

the story is sprinkled with inconsistencies

he actually was arrested for the break in, but then his friend bailey's him out!

A Lot of Churning Issues

between the parties, obviously.

Wow you guys are really

Wow you guys are really milking it! Don't get all whipped into a frenzy!

Heard the break in was on a sundae night...

Has it been solved?

No...unfortunately, all the evidence melted away

It's truly bizarre that I can't find it online

I'm mystified by my inability to find the story online. There were two competing ice cream businesses on Charles Street. The owner of one, and a friend of his, tried to burn the other one down, and managed to kill one or both of themselves in the process. I'm pretty sure one of the guys was Buddy Fishelson, which ought to be a relatively distinctive search term. Nothing. Nada. Zip. This is some sort of weird glitch in the matrix (like "Bearenstain / Bearenstein")

Fishelson was the florist, who was beaten nearly to death with an iron pipe by two 14-year-olds in 1955, but who was saved by an off-duty Boston cop who heard his screams.

But, yeah, the Globe reports that in April, 1975, the manager of the Baskin-Robbins on Charles Street was arrested after apparently blowing up Fred's Ice Cream across the street. Police first had to take him to Mass. General because they found him covered in fresh burns, on account of the gasoline in a plastic bucket he'd placed in Fred's basement exploded on him after he lit it. He died 11 days later - as did a pal who'd helped him and who also got caught in the firestorm.

A year later, the Globe used the incident as proof of how seriously Bostonians take their ice cream (recall, this was the era of Peak Ice Cream around here, when Steve's was like a cult favorite over in Davis Square, with weekend lines that stretched well out into the street).

No links because these are from the Globe archives, which require a Globe subscription to access.

Did Fred's ever reopen?

In 1977, the Globe had a classified ad offering the business for sale.

Fred’s opened after the fire.

It presumably had a different name before that. It was not yet open under the original owner.

I thought Fishelson's kid was involved

I had remembered the story being that the pal who also died was FIshelson the florist's kid?. But I dont' want to sully his reputation or memory if I have the facts wrong.

His kid took over the florist shop

As far as I can tell. But I think the second guy who died worked at the florist, so maybe that's where the connection comes from.

Fred and his partner bought the business after the bombing.

From someone who had intended to open the shop.

Similar story - It kept catching on fire every few months about the same time this photo was taken.

They finally got the message concerning competition and closed the store. Ah the 70's when restraint of trade was an extralegal matter.

That was the era when apartment buildings in the Fenway kept catching on fire.

It's across the street from Toscano
https://goo.gl/maps/9VhnrmCXe1jFpEicA

66 Charles Street Suite No. So and so

I used to use a number of vendors at an old job.

It was always funny to get letters with a return address of Suite 12 or Suite 28 at 66 Charles Street Beacon Hill.

It was funny way to try to impress people that you had your office on Charles Street except many did not know your office was a mailbox inside a 7-11 next to the magazine rack.

...when Charles Street actually looked like that. There was a Mister Donut right near there also. I liked them so much better than Dunkins.

But I'm not sure if the Baskin Robbins was involved. I thought it was between two other ice cream shops on Beacon Hill. One of them, I think, was on Cambridge Street at the corner of Hancock.

The Baskin Robbins was the first ice cream shop on Beacon Hill in that era, and for a long time it was the only one. Then Steve's in Somerville pioneered the concept of premium ice cream, and you started to see other independently owned shops around town.

There must be something about the ice cream wars in the Globe archives from that era, although they may not be searchable through Google. I'm thinking it was 1976, '77, or maybe '78.

My post above ("I remember that!") was written before Adam posted his detailed research about Fred's ice cream, but somehow my post got put far below Adam's. (Maybe because I've never set up a UHub account, and my posts always have to wait for moderation.) As Adam has pointed out, the Baskin-Robbins owner was indeed involved in the arson attack on his competitor. My apologies for the mismemory.

Now that I think about it, though, I seem to recall that there was another similar arson attack on another ice cream store, somewhere in the Boston-Cambridge area, at about the same time. So maybe my mismemory was the result of confusing two unrelated but similar crimes in the same era.

By 1975 I had pretty much stopped going to Baskin-Robbins and was instead patronizing the higher-end shops around town. And maybe that explains why the Baskin-Robbins owner was getting desperate.

injuries sustained during the arson attempt.

The Krackerjacks "counterculture" clothing store in the pic is a pretty interesting story. The co-owner, Donald “Jack” Levy, butted heads with Cambridge City Council many times in late 60s, who tried to ban the "obscene" buttons he was selling.

Ultimately, Jack went on refurbish the Blue Diner and also own a couple diners in Newton, Framingham...

Same City Councilor who had the long-running vendetta with the Harvard Lampoon/National Lampoon? Vellucci?

Thomas Mahoney among others..

Charles st. Down the street

Charles st. Down the street from boston strangler killing. I think first one.

I always thought the Boston

I always thought the Boston Stranglers first victim was on 77 Gainsborough Street in the building I used to live while at NU late 70’s.

Yes. Above the Paramount.

He strangled some nurses sharing a bedroom. One escaped because she woke up and rolled under her bed before he noticed.

The Boston Strangler victim above the Paramount was Mary Sullivan, age 19, killed on Saturday, January 4, 1964. She had just started working at a bank on Franklin Street on January 2, and had moved into the apartment on January 1. Her two roommates worked at Filene's, so they were working on Saturday. They thought Mary was sleeping when they came home, but found her body when they tried to wake her for dinner.

Some of the Strangler's victims were nurses, but all were alone in their houses when they were murdered. Many of them lived by themselves. If they had roommates, as Mary did, the roommates were away at the time of the crime. So there were never any witnesses.

Albert DeSalvo was caught when he attacked a woman in Cambridge, but apparently had second thoughts during the attack, and didn't kill her. The description she provided led to his arrest. He was well known to the police for a large number of burglaries and the like, but until then he hadn't been linked to any murders or sexual assaults.

For many years Mary Sullivan's family claimed that she'd been murdered by someone other than Albert DeSalvo. One of her relatives even wrote a book about the case. About 5 or 6 years ago, DeSalvo's body was disinterred, and DNA evidence proved that he had assaulted her.

Mary Sullivan was the last woman killed by the Boston Strangler.

I had the details mixed up.

We loved reading your comments and memories on this one. Thanks for sharing them!

street view shows the property was renovated in 2011

As Boston Covid-19 rate drops, city announces vague plans for re-opening libraries, offers a few more specifics on community centers
Birria tacos in Boston
The Cornhill Lunch Room is open to take your orders
Man finishes goal to walk every single street in the city of Boston; picks out his favorite streets in JP
Election roundup: Hotel and food-service workers back Janey; we have Covid-19 to thank for Frank Baker running again
If you want late-night house parties, move to New York, councilors say