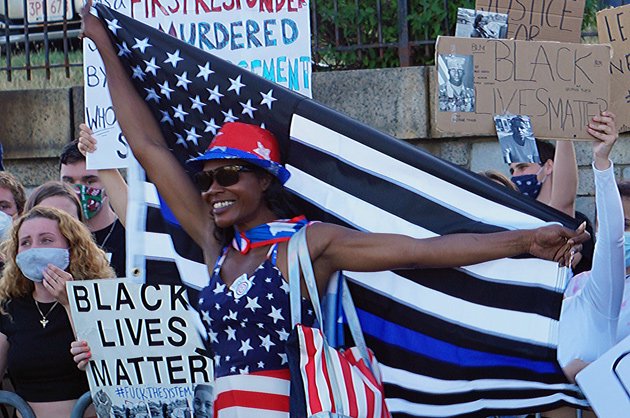 The Supreme Judicial Court ruled today that the state does not have to print Rayla Campbell's name on the Republican ballot for the 7th District congressional seat, because she failed to collect even the reduced number of signatures the court had earlier allowed due to Covid-19 issues.

The ruling means Republican voters in what is now US Rep. Ayanna Pressley's district will have no candidates listed on the Sept. 1 ballot. Campbell, a Randolph resident, has said she will run a write-in campaign to defeat both "antifa Ayanna Pressley" and the "anarchists and Soros funded misfits and malcontents" she says are out to get her.

Rachel Miselman of Dorchester, who uses a photo of Dapper O'Neil as her Facebook icon and who insists all lives matter, is also running a write-in campaign for the nomination to face Pressley in the state's only minority-majority congressional district.

In April, the state's highest court cut the number of signatures required to get on the fall ballot in half - and said candidates could collect signatures electronically, rather than on paper, because of the Covid-19 state of emergency declared by Gov. Baker. In the case of congressional candidates, that mean collecting at least 1,000 valid signatures, rather than the usual 2,000.

Elections officials certified that Campbell had collected only 544 signatures, although she claimed she actually had an additional 108 valid signatures that were rejected for lame reasons - including Cambridge signatures mistakenly turned into Boston that were not rejected until it was too late to get them to Cambridge.

In her request to be put on the ballot, Campbell asserted that the court should reduce the minimum even further for her because the 7th district has so many minority and foreign-speaking residents, because it was hit harder by Covid-19 than any other district, making signature collection even harder, and because some of the communities in the district, including Boston, Cambridge and Milton, are split between two congressional districts, making it harder yet to find residents who live in the district - especially Republicans, who already make up such a small percentage of the district's registered voters.

In its ruling, the state's highest court concluded:

None of the difficulties Campbell has identified leads us to believe that additional relief is now warranted. Indeed, some of the difficulties she identifies surely existed in the Seventh Congressional District before the onset of the pandemic and are likely to persist after it is over (e.g., the small percentage of Republican voters, the split-municipalities).

The court did agree with Campbell that the district, which includes Chelsea, at the time, the state's hottest Covid-19 hotspot, and East Boston, which has Boston's highest Covid-19 rate, was hit harder than the rest of the state by the virus. But it continued, not mind-numbingly so to the point of requiring a calculation of a different signature requirement for just the one district:

The truth of that assertion, however, does not affect our conclusion that we should preserve the uniform signature threshold set in Goldstein, and not allow that threshold potentially to differ depending on the particular demographic, economic, political, or geographic circumstances in each district.

she's from that planet! you know THAT planet??

ANYONE, regardless of party affiliate (preferably democrat) runs against her.

I'd prefer someone effective rather than someone focused on her twitter followers.

ANYONE, regardless of party affiliate (preferably democrat) runs against her.

Yeah, well, they could have done that if they wanted to. The rules aren't exactly secret, the fact that House seats are up for reelection every two years isn't a secret, the primary dates aren't a secret, and anyone who didn't just fall off the turnip truck knows that there are deadlines for filing and for presenting signatures, and very stringent requirements for those signatures. Every campaign that's not being run by some ignorant goober knows what these requirements are and puts a lot of effort into following them, because if your signatures are shit, you don't get on the ballot. Dropping the signature requirements is a pretty large concession, and every real campaign met it with ample margin, pandemic or no.

I'd prefer someone effective rather than someone focused on her twitter followers.

I'll bite, o nameless one. What's your definition of "effective"?

Effective for whom, straight

Effective for whom, straight white people who live in the suburbs? Think you'd have a hard time finding people from virtually any underrepresented groups that would say she has not been the strongest leader in her position that we've ever had.

I generally like Pressley and I wish someone was running against her. Too many unopposed races around here, both primaries and general elections.

So why didn't you?

Could it be...that you're not actually in her district and don't have a proper understanding of whether or not she's doing a good job of appealing to her actual constituents?

Maybe she should have asked for signatures outside of Randolph?

Her entire campaign is "Randolph doesn't like this/want to be seen like this". It is as bad as when Capuano wanted to represent Somerville in the US Senate, not noticing it was a statewide office.

It is too bad that she couldn't canvas, but the rules were changed and apply to everyone.

Campbell asserted that the court should reduce the minimum even further for her because the 7th district has so many minority and foreign-speaking residents...

And I'll bet she denies the existence of white privilege.

This doesn't make any sense.

If she said "non-citizens" I would understand.

Sorry if I muddled that

I think her argument, at least with foreign-language speakers, is that it's harder to get them to sign petitions because they don't speak English.

Know your district? If you

Know your district? If you know there's a lot of people, who are voters, but do not speak English, perhaps you should try to find a way to be able to communicate with them before you try to make them your constituents.

Unless I'm misreading the caption on the photo in Adam's article, the person you just accused of "white privilege" is a black woman.

for all the complaints I see about Pressley, Warren, etc, Republicans still can't seem to find even a half-decent candidate to run against them...

No one on the bench

To use a baseball metaphor, their farm system is barren.

The most popular politician in the state is a Republican. Trump is as popular as herpes. Guess who GOP chairman Jim Lyons wants to emulate?

The GOP had 6 senators - they've lost the last 2 special elections and are down to 4. From what I've read, they could be down to two after November.

All that said, a Miselman-Campbell debate would be appointment viewing.

Rayla and I agree on one thing

So we both agree that Ayanna is against facism. That's a good thing.

Will V.A. Shiva put on his doctor hat..

And send, like, an email for her with his usual racist trope?

This is sorta funny

The Republicans and Democrats have, since the 1992 elections where independent candidate Ross Perot gained 19% of the popular vote, conspired together to create "ballot access" regulations that keep out everyone but the candidates from one of these two parties.

Yet parts of Massachusetts are so overwhelmingly Democratic that now these regs are being used to shut out Republicans.

Do you know what a "primary" is?

It's really that simple. Members of a party decide who will represent that party in the general election. Honestly, do you know anything about this, or are you just blowing pure unadulterated hot air?

Unless I'm missing something, the requirements aren't any harder for independent candidates vs party candidates - https://www.sec.state.ma.us/ele/elepdf/Candidates-Guide-generic.pdf - if anything, you could argue it's easier, since you don't have to deal with primaries. Get 2000 signatures and you're on the ballot, and you even have more time to collect those signatures.

The better issue would be - why don't these qualified independent candidates try and run for smaller, local offices in order to gain experience and name recognition instead of trying straight for statewide office? Or is it just that they prefer to complain rather than actually try to change things?

Normally, I try to take an

Normally, I try to take an educational stance rather than an admonishing one when it comes to US Flag Code but that picture shows completely disregard for any respectful usage of the flag. Not a good look for anyone who wants to serve in public office.

is both disrespectful to flag code and deeply creepy. As I've said before, it reminds me of something out of "Children of Men".

I don't fault those who

I don't fault those who display that sort of flag personally, largely because it's not worth my thoughts, but it is not the flag of our country and should not be displayed in place of a US Flag. Every US Flag design that has ever been used by the country is forever a proper US Flag and can be flown as such. Even the Betsy Ross Flag is a little tricky, due to lack of evidence, we don't know that it was a real, sanctioned flag. It may have been, but the proof of such appears to have been lost to history.

from state signature gathering rules for the white, female Concord resident running out of district against Keating in MA9. Interesting application of resources.

MA-9, Helen Brady. I do not believe there was any question as to whether or not sure met the relaxed requirement of 1,000 signatures. The issue was in how the software that she used to collect signatures recorded them, and the SJC ruled that it was still a valid means of collection.

Remember the Lowell Sun is the Herald and no

one from the state republican (Trumpghanistan) party challenged the ruling on behalf of the affected Boston minority candidate. Even if its pissing into the wind, it demonstrates republican priorities. Madam not Gizelle Brady will lose just as badly as Ms. Campbell would have. So what gives?

Sounds like someone's angling to be a Z-grade version of Diamond and Silk...call her Rhinestone and Polyester

If there are that few

If there are that few Republicans in the district that you can't even find a thousand to get you on the ballot, who do you think is going to vote for you? I can't make up my mind whether these people seriously think they have a shot, or if they're indulging a taste for public humiliation.

This video really says everything you need to know about her.

I thought they were even

I thought they were even allowing electronic signatures for this cycle. Not to mention a campaign that was even remotely organized should have seen the shutdown coming and rushed out the door to get sigs. 1,000 is not all that many to get. You pull the list, select for all Republicans and you literally call up every Republican voter and just state you are running for Congress and need signatures. Ayanna is not very popular among Republicans so I imagine it should not be all that hard to get the names if the contender even tried.

This was the loon in front of

This was the loon in front of me in line at a medical cannabis establishment. Refused to wear a mask, was yelling at other people and basically just talking to the air. I hope she got some good indica to help her chill out.