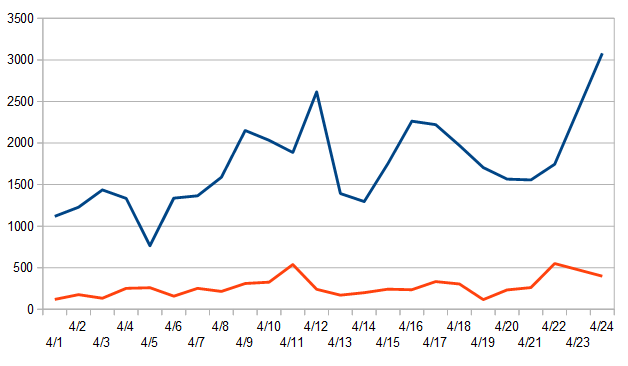 Massachusetts today reported 3,079 new Covid-19 cases, the largest number since the state began testing in March - and far more than the 1,745 cases reported just the day before.

There were fewer reported deaths than the day before, but in both cases the numbers were higher than at the beginning of the month.

Along with all those new cases, the state also reported 178 new Covid-19 deaths today, bringing the state's recorded total to 2,360. Yesterday's count was 221 deaths.

Daily death counts statewide (in blue) and in Boston (in red): 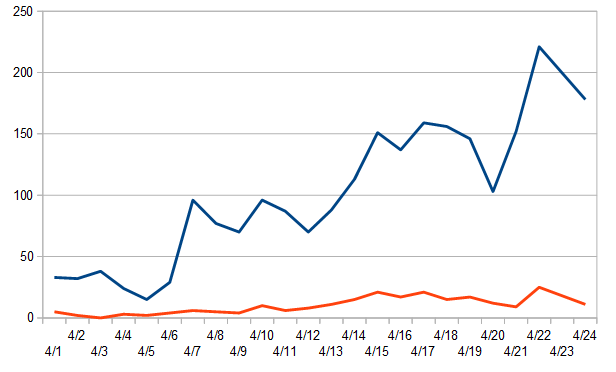 At a noon press conference, before the newest numbers were released, Gov. Baker called the death total "staggering" - and said "we must remember the people behind these numbers."

Until today, statewide case numbers had seemed to be leveling off in recent days, but Baker had cautioned then that a few days doesn't make a trend, especially since numbers have varied so much from day to day in the past. He added that thanks to aggressive work by the state and its hospitals to add beds, the state is so far able to handle the increased caseload - there were 3,977 people hospitalized with Covid-19 complications, up 100 from the day before, but more than half of the state's current 18,000 hospital beds are empty, in anticipation of both more Covid-19 patients and for any other patients who need care for non-Covid issues.

Baker also said that the state can't begin to start planning a re-opened economy until it gets a better handle on case numbers, which he has said will take far greater testing, the current surge levels off and the state has a much larger contact-tracing system to contact people who have been in close contact with people who test positive.

Because there was 3x as many tests conducted as there were reported yesterday....so the cases is 3x as high.

What about non-specific death rates for MA vs. average?

Is that data available?

My understanding is that if you look at the overall death rates, they're way up across the country even when not tied to covid-19 through positive tests.

This article may help you out:

Across the United States, even as coronavirus deaths are being recorded in terrifying numbers — many hundreds each day — the true death toll is likely much higher.

The overall death rate is reported accurately, and is up. The COVID-related death rate is under-reported, because of incomplete testing, so the "not tied to covid-19" rate is inaccurate.

I am wondering what the total death rates for YTD 2020 is vs YTD 2019 (or earlier) for Massachusetts. There's going to be some randomness and variability due to population dynamics but if that number is way higher than last year, we can/should assume covid related impact, including a lack of getting emergency care due to issues such as capacity and fear of going to a hospital, etc...

For example this report:

I'd like to see that data for this year to date but I don't think it's published.

I constantly see people hanging out in large groups together on street corners and such, completely negating any sacrifices the rest of us are making. So long as this is allowed to occur, the virus will keep getting passed around and around, and the quarantine period will last forever as it has been shown that even people who get it can get it again.

Many cities in Greater Boston

Many cities in Greater Boston are going to start fining folks for not social distancing. Cohasset comes to mind.
https://www.miamiherald.com/news/coronavirus/article242232226.html

I await the "freedom to assemble" lawsuits.

Something I learned from the marijuana decrim movement years ago: In Massachusetts, you are not required to identify yourself to police on foot. There is a 1967 SJC decision on the books about this. Only in a motor vehicle (drivers license "implied consent" law) and if arrested must you identify yourself.

Merely ticketable offenses in MA are not arrestable. Thus you can refuse to identify yourself to the cop and he can do literally nothing but write the ticket to ______ or walk away. You can take the ticket and toss it in the trash right there. I personally witnessed the marijuana decrim activists engage in this kind of civil disobedience on Boston Common, on video.

I personally have no issue with social distancing as a prudent idea. But if they're going to try to enforce it as a law, they need to be reminded we still live in a constitutional republic. State governors and city mayors using emergency powers to rule by decree and now create criminal law need to learn their place.

Constitutionally speaking youre both right and wrong..But practically speaking officers 1. know how to write reports to justify arresting people and charging them with resisting arrest,, misleading a police officer etc etc,, beware MGL c 268, 13B. and M.G.L.c 269, sec 13A
and 2. police officers carry guns and nightsticks so good luck with that. 3. now is not the time to "test" first responders with constitutional minutia..their job is already stressful and difficult enough...As a defense lawyer for many years who is inherently skeptical of potential police abuses, i DO have to say, now is the time for compliance for the safety of all, including all first responders...they matter to.. Be smart, Be safe, stay home for now if at all possible. Do you part.

In Dorchester, at least,

In Dorchester, at least, people seem to get the idea*. Just about anybody I see on the street is masked. Fewer people than normal are out at any time.

In Milton, however... I came back through Milton from a work errand. One stretch was amazing. In a short run of a few blocks I saw a dozen-plus people - singles, couples, people with kids, dogwalkers, joggers - no masks, no apparent thought given to the likelihood of meeting somebody on their circuit and having to pass within a few feet...

As an essential employee, I have a 40-minute walk to and from work in Cambridge. I avoid main streets like the plague (pun intended). Just my observations from less traveled I would say less than half of fellow pedestrians wear masks. Joggers are the worst offenders with very few wearing face coverings and not practicing social distancing. A couple of highlights yesterday was an old guy in a white button-down shirt rollerblading to his house in his underwear without a mask. Another Darwin award goes to the young father with his small child teaching the kid how to bike on a narrow East Cambridge sidewalk. Both were not wearing masks and could care less about social distancing. Millennials love to meet friends for walks and not practice social distancing. Another thing smokers who wear face masks in public, but then lift there masks up to smoke. I now hate beautiful days because it brings more people outside there homes.Uuuuggghhhhhh!

Urban areas are better at this

I took a bike ride last weekend, and the contrast in mask wearing between urban Somerville and suburban Waltham was amazing, something like 80% vs. 20%. (The actual density of pedestrians was about the same.)

I'm in Dot too and only leave my house for supermarket runs (luckily I've become a happy Drizzly customer so get my booze delivered).

I too have noticed most people wearing masks & gloves. But when I do go out, I always come across guys that I would guess are in their late teens/early 20's walking together, laughing, even smoking their bud, with NO masks, NO gloves, just basically ignoring everything. I think maybe the younger people think oh only old or chronically ill people get this Coronavirus.

Newsflash dummies. If your friend's granny whose couch he sleeps on because he ain't got anywhere to go and has nothing going for himself in life, happens to get it, he might not know he caught it. Then ya'll are blazing up together passing the blunt back and forth and walking around the street like all is well, possibly spreading this worse.

I'm sorry Adam, I'm aware of some of my run-on sentences here and I normally would want to just die for shit like this but hell with it.

Plenty of examples of likely indoor transmission. Has anyone seen any reports of outdoor transmission in any volume? Are people getting it walking down the street? Probably exists, but doesn't seem common. Close quarters with little air movement or exchange seems to be a common denominator. This would mean masks outdoors have little impact in limiting transmission.

We are beyond stupid if we

We are beyond stupid if we dont think there are going to be more cases as testing is increased. Why are we so shocked?
I would be shocked if death rate would rise in proportion to case rate?
In New York Random Survey completed recently says there are alot more infected but and this corroborates the Santa Clara survey the death rate goes from 5% to a decrease to under 1%

If you bother to do the division and then plot the data for the month of April -- you find "surprise" -- Nothing!

As has been noted several times the CDC and MA Health protocol for testing means that the number of tests reported can fluctuate with no rhyme or reason just depending on????

Anyway -- the most interesting data in the April 23 MA report is that for all intents and purposes Everyone [well OK 98%] who died had a pre-existing condition [co-morbidity]. Well more than 1/2 had been previously hospitalized and a very large fraction of the deaths were to people in the 80+ cohort.

For all intents and purposes -- All young [<60 years] healthy people who get the COVID-19 eventually recover.

Finally, on the White House Briefing front:
Top Lab at Ft. Detrick MD. reported on study of half-life of the SARS-COV-2 virus under various conditions both on surfaces and in the air.

You need to pick up the pace

Yes, old people with underlying health conditions are dying at a sad rate. But seems like you missed the more recent news: Young and middle-aged people, barely sick with covid-19, are dying of strokes. I'm sure old people with existing conditions will continue to make up the majority of fatalities, but they won't be the only ones as the epidemic progresses in Massachusetts.

As for the briefing, you're absolutely right - some government agency found that sunlight and bleach can kill the coronavirus. On surfaces of inanimate objects. Which is not exactly shocking news. Our Most Gracious Majesty was not talking about inanimate objects, though, except, possibly, in the future tense (as in, if you inject somebody with Lysol, they will soon become rather inanimate).

Unfortunately, too many "community" gardeners and visitors to the Victory Gardens in the Fenway don't wear masks while congregating around the pathways and public areas of the park.

These are the same people who ran the homeless out of the park.

The Boston City Council & Park rangers should cite these people as a public NUISANCE and for endangering others.