Mayor, state rep agree: North Enders will decide what to do with Columbus statue once his head is put back together 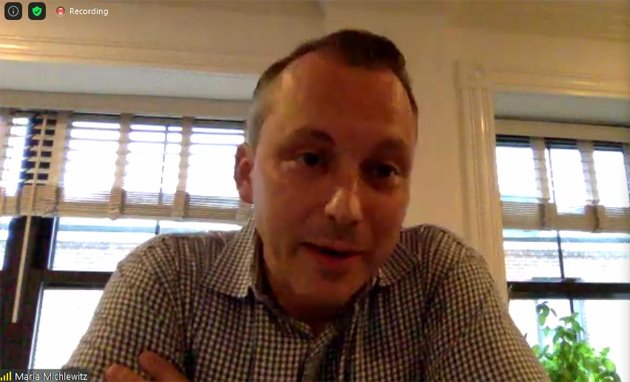 Michlewitz zooms in on statue, other issues.

Walsh told the North End/Waterfront Residents Association that he could not yet say when Columbus, the rest of his chiseled body now standing in a city Parks and Recreation Department storage facility - would be ready to face the world again. He said that experts first have to figure out if the seven or eight pieces Columbus's head shattered into when somebody lopped it off can be put back together or if it's become a marble Humpty Dumpty that has to be replaced with a new replica of an Italian explorer's noggin.

But once Columbus gets his head screwed or glued back on, Walsh and state Rep. Aaron Michlewitz said, North End residents will decide where the statue will reside - and whether the park should keep its name.

It's a similar to the stance Walsh took on changing the name of Dudley Square to Nubian Square, that local people should decide the names of local things.

"I'm mayor of Boston, but I live in Dorchester," he said.

Walsh emphasized he does not condone vandalism or defacing but that he understands that the whole Columbus issue is part of a broader discussion about racism, such as where we should honor a man who introduced widespread fatal diseases, executions and slavery to the New World.

As residents consider the future of the statue and the name park, "just understand there's always another side," he urged. He asked North End residents to remember that even on Sunday night, most of the protesters were "peaceful, coming and expressing themselves and going home and not causing all kinds of damage to property."

Michlewitz, who followed Walsh on the agenda, said he figured that the Columbus statue would become a target in the heat of the moment, that even more than storefronts, "I was saying it was going to be the statue."

Like Walsh, Michlewitz said he understands the concerns of people who object to a statue of Columbus in Boston, but, like Walsh, he said it's going to be up to local residents to decide its fate.

"just understand there's always another side... [most of the protesters were] peaceful, coming and expressing themselves and going home and not causing all kinds of damage to property."

Walsh's words remind me of this historic exchange:

Reporter: "The neo-Nazis started this. They showed up in Charlottesville to protest --"

Reporter: "George Washington and Robert E. Lee are not the same."

Reporter: "I do love Thomas Jefferson."

"So you know what, it’s fine. You’re changing history. You’re changing culture. And you had people -- and I’m not talking about the neo-Nazis and the white nationalists -- because they should be condemned totally. But you had many people in that group other than neo-Nazis and white nationalists. Okay? And the press has treated them absolutely unfairly.

I grew up next to Longfellow Pahk. The monument to him had the bust of his head on it. It was stolen many times during my time there. It was alway found and returned. I’m truly against tearing down statutes of our history for any reason.

statues aren't bestowed by nature, they are the results of very specific choices made by people with influence and money.

THE HARBOR IS RIGHT THERE GUYS

So if a neighborhood wanted

So if a neighborhood wanted to put up a Hitler statue that would be fine?

Put up a statue of Godwin

Put up a statue of Godwin instead.

So Walsh understands Columbus was a horrible individual and the statue will be an issue because of broader discussions about racism, but if the north end residents want a statue of a horrible man who executed and enslaved people then it's up to them.

He doesn't seem to understand that the decision the city makes will actually reflect on itself and it's values, and rather than be a leader and make the decision himself he will leave it up to the neighborhood that this statue is really barely in.

I actually thought it was a

I actually thought it was a pretty good response for the mayor to let the local residents decide on that, as he did in the case of Dudley -now Nubian Square. I don't want a mayor who gets caught up into arguments over every city monument or neighborhood renaming.

I am no huge fan of Walsh in general. To me, he is "Mr drive everywhere", hired too many cronies, and too easily bends to unreasonable union demands among other things. But he is quite competent overall, highly aware and knowledgeable about all that's happening all over the City and he is not tone-deaf. It could be worse.

As long as no one from Dedham

As long as no one from Dedham gets a say in it this time.

There are better options

Amerigo Vespucci for example. Cartographer, fairly ignorant but hey, it was the 15th century, Italian. Oh, and the continent is named after him.

Italy as a nation didn't even

Italy as a nation didn't even exist at the time.

The modern country of Italy didn't exist as a nation during the time of Columbus either.

Columbus was born and grew up in the Republic of Genoa, lived many years in Portugal, and later moved to Spain, under whose flag, he made his famous sailing expedition to the Bahamas, Cuba, Hispaniola and other Caribbean islands, but never to what is now the U.S.A. Vespucci was born and raised and lived many years in Florence before moving to Spain.

The head has been taken off

The head has been taken off so many times It might as well be fitted with a zipper.

So, who won the Italy/England soccer match?
The raging Charles
Citizen complaint of the day: Cutest menace ever in North End community garden
Court ruling means residents of one North End wharf building might have to move their cars permanently
Taps on the Prado
Like Venus rising from the sea, if Venus were a bridge across the mouth of the Charles