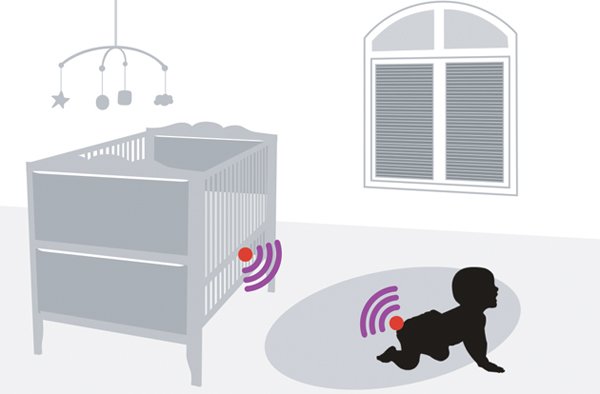 Rudolph with your butt so bright, won't you guide my sleigh tonight? Image by MIT News.

MIT News reports researchers have developed low-cost wetness sensors that can be embedded in diapers to sound a clarion call when baby needs a new diaper.

The target market would be not just parents who don't wish to be so attuned to their babies' bodily functions but nurses in maternity wards and, potentially, adults who need diapers but are too embarrassed to keep checking themselves.

Previous efforts have focused on strips that change colors - which forces parents or caregivers to, you know, actually check the diaper - or for more expensive WiFi or Bluetooth-enabled diapers. RFID chips - such as the ones embedded in CharlieCards - in contrast, "are low-cost and disposable, and can be printed in rolls of individual stickers, similar to barcode tags."

The design they came up with can be incorporated in the bottom layer of a typical diaper. The sensor itself resembles a bow tie, the middle of which consists of a typical RFID chip connecting the bow tie’s two triangles, each made from the hydrogel super absorbent polymer, or SAP.

Normally, SAP is an insulating material, meaning that it doesn’t conduct current. But when the hydrogel becomes wet, the researchers found that the material properties change and the hydrogel becomes conductive. The conductivity is very weak, but it’s enough to react to any radio signals in the environment, such as those emitted by an RFID reader. This interaction generates a small current that turns on the sensor’s chip, which then acts as a typical RFID tag, tweaking and sending the radio signal back to the reader with information - in this case, that the diaper is wet.

The researchers found that by adding a small amount of copper to the sensor, they could boost the sensor’s conductivity and therefore the range at which the tag can communicate to a reader, reaching more than 1 meter away.

It's a sad day for society when parents

Because you'd rather stick

Because you'd rather stick your face in Junior's tush and sniff?

or you could just you know

or you could just you know feel the diaper. It's usually pretty clear when it needs changing. No sniffing required.

You ever change a diaper?

You don't have to stick your face anywhere or touch anything.

You can smell it at close range.

This could help people with anosmia.

If you're sticking your nose

If you're sticking your nose in a tush, you're doing it wrong.

It will notify Alexa who will announce

"Your baby did a poo poo, please get your lazy ass off of Facebook and change her"....or you could get a robot to do that too

If it's only good for about a meter...

At that range, it's as easy to check the diaper.

I'm assuming that this will be sold to be compatible with a combo baby-monitor/diaper monitor. Which will reduce the sleep of parents with newborns even further.

who asked for this

This has been a solved problem for, uh, however long it's been since diapers were invented.

Maybe there's a decent industrial application for it, I guess.

When there is a sensor that

When there is a sensor that can identify a bad parent, i'll be excited.

Meanwhile, Charlie Cards are impossible to find most places (I know AFC 2.0 is coming but lets be real it wont be for a while)

Bingo. Disposable diapers are already one of the largest volume items of landfill waste. No need to make it worse.

I feel as if many people

I feel as if many people commenting did not think through all the uses nor did they read the full blog post.

As mentioned above, people attending to multiple children at once. This would be a god send. I also envision this being useful for people who are helping to keep track of children but may not be the parents or someone who deals with kids all the time. Think a real Au Pair (not the over worked ones that act as Nannys) the kid next door who will play with the baby for a few bucks while mom works from home, Uncle Bobby who would not know a full diaper from a hole in the wall but is great with the kids or even older siblings who are old enough to keep an eye on younger siblings but maybe not change diapers while Mom is doing laundry etc.

I also think the uses for adults is even bigger.

For, well, shits and giggles I showed this to my SIL who does childcare in her home for a living.

It isn't something that she would find useful in the least. It is an important part of child development for toddlers to tell you what they need. She isn't legally allowed to have more than two infants in her care at once.

This simply isn't an issue.

...But don't babies come with their own clarion call when their diapers
need changing?

If you've ever had to endure an advertisement for diapers, you may have gleaned that the technological push has been to be "super absorbent." The other end of that equation is that you can end up with a "wet" diaper that the wearer doesn't know is wet.

Ok but will there be an app

Ok but will there be an app for it?

There's already a sensor for this

I see this more applicable in nursing care situations.
For instance, my father suffers dementia and is starting to refuse to go to the toilet and prefers his Depends. He won't tell mom and becomes nasty if she asks him so she ends up finding out after it becomes a mess. This would be a perfect thing to help negotiate the, "time for a change" or maybe even encourage toileting because an "uh-oh" alarm goes off.. But would there be false alarms for sweaty bums?

I oversee care for a ninety-year old. Sometimes they will be unsure of the state of their pad; due to lack of sensitivity or slight dementia or occasionally (agenda inexplicable to the rest of us.) Checking a large, fragile, invalid in a power wheelchair (and changing requiring a Hoyer lift) is intrusive and complex so a simple, inexpensive, remote sensor would be useful. My only concern would be the device be trivially removable from the pad to avoid improperly disposing/recycling its materials.

Next app on the market

will lead the user through pouring piss out of a boot

so that when the person next to you in the theater farts, their seatback lights up.

And the app will quietly

And the app will quietly transmit baby's bowel movements to Amazon and Facebook. Next thing you know diapers will show up at your home by drone delivery and a status update will appear on your feed. App will be named "SmartAss."

Countdown until someone hacks it and inserts a different payload...

What's that infernal beep I hear?

Reading about these electronic diapers, I'am having a lunch-time philosophical moment. I’ve come to the conclusion that most 21st century “innovations” create as many or more problems and anxieties as they solve.

The internet and Facebook-like companies were supposed to bring people together and make them smarter and better-informed citizens, but that didn’t exactly pan out across the board. Amazon brings high convenience and lower prices, but it’s creating or exacerbating a bunch of other issues along the way. The (very expensive) health care industry that’s bringing riches to the Boston-area and curing rare diseases is also making basic healthcare increasingly unaffordable and bankrupting people across the country. The US is awash in super-cheap food calories and most US adults can now afford a car packed with electronics and drive everywhere, but nearly half the adult population is expected to be obese by 2030 (NYT 2/10/20). Cheap air-travel leads to overtourism and faster pandemic spread.

Worst of all, most of these innovations lead directly or indirectly to ever greater expectations, resource consumption and environmental havoc. Even innovations intended to make our society more resource efficient tend to lead to greater consumption in the long run (AKA the Jevons Paradox -very interesting thoughts on that topic at the link below).

Somehow, I just don’t get as excited about innovation as I used to…

Now we're connecting 'everything' to the internet. A reference:

This site makes fun of having everything (lockers, refrigerators, speakers) people are now connecting to the internet.

I started to post this, and only then realized it's punny and more appropriate than I initially thought.

Check it out. Har har: https://twitter.com/internetofshit

Will the sensor-equipped diaper post a 311 complaint on the infant's behalf if not changed quickly enough?

RTFA and stop being snide

The target market would be not just parents who don't wish to be so attuned to their babies' bodily functions but nurses in maternity wards and, potentially, adults who need diapers but are too embarrassed to keep checking themselves.

Another place I can think of is infant rooms in daycare centers. Among other things, being able to tell which infant is wet without sticking a finger in can help prevent spreading infections.

Unless the idea is that it would make it possible to inappropriately assign more infants per nurse that is ...

my stars, how dare you suggest such a thing? it’s much more fun to wax philosophical about the downfall of mankind. for we know surely that the internal combustion engine is an unneeded convenience!

My God, how have we made it

My God, how have we made it this far in history without smart diapers....