Mystical Boston neighborhood re-emerges from the mists of time, at least on some online maps 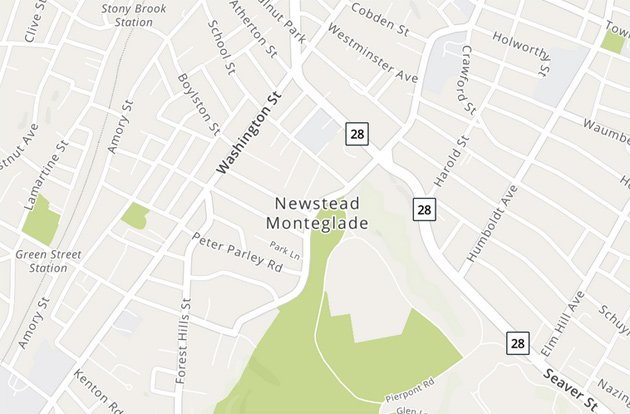 MapQuest map of the area.

Coffee consumer Ron Newman was looking for Dunkin' Donuts in Roxbury today when he discovered that the map you get if you search on 02119 brings up an unusual neighborhood name at the northernmost tip of Franklin Park: Newstead Monteglade.

Oh, ho! It's been 15 years since we thought that fabled, mystical place had slipped the surly bonds of earth, when the U.S. Geological Survey's Board on Geographic Names declared the place "historical" because nobody actually lives there anymore - and never mind it was never actually a place to begin with (it was the names of two estates Boston bought as part of the creation of Franklin Park).

But in any case, MapQuest, which we were also surprised to learn still exists, has apparently added the place to its own mapping database, which means it shows up on the sites of its customers, such as Dunkin' Donuts, as a section of Boston.

Or rather, MapQuest re-added Newstead Monteglade to its mapping database.

Back in 2005, when the earth was still cooling, MapQuest was the mapping site and it had used the USGS database to build its own database and so it included Newstead Montegrade (as it was originally tagged) as a Boston place, which in turn meant it started showing up in all sorts of database-driven travel sites, which in further turn meant certain people in the Boston area briefly had great fun adding to those databases with examples of what to see in Newstead Montegrade, where to stay, etc., etc.

And then Ron Newman (yes, the same intrepid coffee-seeking Ron Newman mentioned above) managed to convince the USGS Board on Geographic Names to, if not drop Newstead Montegrade, at least mark it as "historical". Oh, and with a name change to Newstead Monteglade, because it turns out one of the estates was called Monteglade, not Montegrade, as we, and the USGS Board on Geographic Names, discovered through some intrepid work by a BPL research librarian.

For some reason, MapQuest has ignored the "historical" tag and is now boldly proclaiming the renewed existence of a Boston neighborhood where nobody lives, unless you count the fauna that live in the park.

Newstead Montegrade - the truth comes out - featuring a history of the place by BPL research librarian Mary Devine.

Could be a reversion

Could also be a new upload.

There are numerous fictitious and never built things on maps. Map makers used to use stuff like this to copyright their work - intentional errors meant to trip up non-original cartographic depictions. Some maps also contain "paper roads" that were platted out on municipal maps at some point but were never actually built.

My neighborhood has a paper road that keeps turning up in google maps as if it were actually paved and actually connected to a dead end street. We can tell when we need to contact google again because of the frustrated motorists heading up and turning around while their gps voice scolds them for not taking a left. They apparently have no way to permanently code it as not existing.

Can't decide if my parking lot is an extension of the street I live on, or the road perpendicular (the parking lot does exit on both streets, but....). Seems to flip ever couple of years. I've given up on notifying them.

Yeah, like Busta Rhymes Island
Island in Shrewsbury. It's only a 40 by 40 piece of land in the middle of Mill Pond. It's not official but a guy is a huge fan and petition the town and put it on map...

Quite some years ago the state and city opted to rebuild Washington Street in West Roxbury to improve traffic flow. The section to be rebuilt and repaved was that section between West Roxbury Parkway at Bellevue Hill, through to Grove Street. Essentially the section that is wide with the center island divider. The construction proceeded and the construction firm went by the available maps.

To make Washington Street swifter and allow for better through traffic, the cuts in the center island that allowed autos to take turns onto side streets were eliminated except in a couple of preferred locations such as West Boundary Road. At those limited locations they added a left turn lane.

The rationale was that other streets that parallel Washington Street would serve local traffic and emergency vehicles. That of course was a false assumption and the construction firm did not check the maps. Many of the parallel roads were only on paper and were never built.

In the end, the construction firm had to go back and rebuild all of the areas where they eliminated the center island cuts and put them back. The fire department, which initially discovered the issue when they tried to respond to a side street, was very pleased at the fix.

How they were left out of the pre-construction meetings was never determined.

On the screenshot: "Dudley T Station"

though I didn't look to see if all the signs there have been changed. The destination of the electronic sign on the #1 bus now says NUBIAN STA or NUBIAN SQ (I forget which)

It just says Nubian, which

It just says Nubian, which makes me giggle for some reason. Since it's shorter than DUDLEY STA, the text is also gigantic.

Do you believe everything

Do you believe everything google tells you?

I can tell you don't!

You don't let computers tell you what to think! You think for yourself! Good for you!

fun fact for the day

The earth is still cooling, very slowly; that's what's going on when magma moves toward the surface, erupts, and then cools, giving up heat to the atmosphere and then to outer space.

You must be cooling

From the whoooosh you just experienced.

A third geography for...

Mr Newman is a legend

I'd contribute to a Ron Newman documentary

Not even joking. The world needs to know more about this local treasure. His place in history is surely worth preserving at least as much as Newstead Monteglade's is!