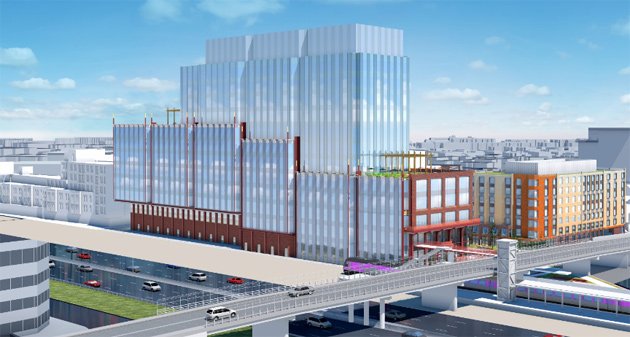 Rendering as seen from north of the turnpike by SGA and Preston Scott Cohen.

Developers have filed plans for a development on Braintree Street in Allston that would include a 12-story office/R&D building and a 6-story, 97-unit residential building in which at least 20% - but possibly up to 60% - of the units would be rented or sold as affordable.

Developers David Bracken and Aaron and Michael Blank's plans for the 1.8-acre site at Everett Street, filed this week with the BPDA, are just the latest in a series of projects that are transforming the corridor along the turnpike in Allston and Brighton, spurred by the New Balance complex and the Boston Landing commuter-rail station.

In their filing, the developers say they will try to increase the number of affordable units in the complex above 20% through a combination of state and city funding. But even at 20%, which would be roughly 20 units, the project would be well above the city requirement of 13% affordable units in new developments.

The proposal calls for 212 parking spaces for the commercial building, which would include ground-floor retail and restaurant space, but just 7 for the residential building - right under the Everett Street Bridge from the Boston Landing station and near several bus routes, as well as about 3/4 of a mile from the Green Line.

The developers hope to begin 30 months of construction in 2022.

Proposed view of the complex from Braintree Street: 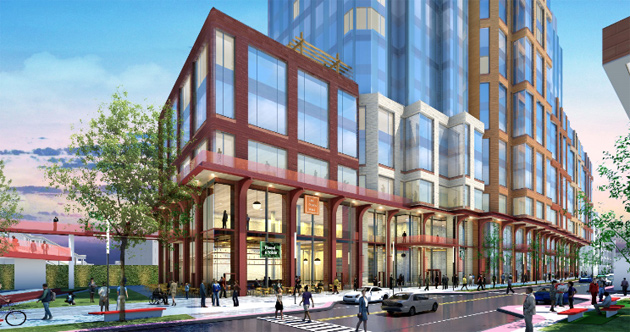 Btw, same side (south) of the pike as the station- yiu can even see it in the picture.

Of course, I meant "Everett Street Bridge," but was obviously thinking of the whole turnpike thing (like how the ride along the turnpike in Allston/Brighton will eventually be sort of like driving through a canyon).

I'm on board with the construction, but at some point the MBTA is going to have to budge and make the 64 a full-service line given all of the development in that area.

Oh ya baby soak up that pike

Oh ya baby soak up that pike smog

This is why it has more 'affordable' units.. its next to the freakin Pike. And I am willing to bet that the affordable ones face the pike and the more expensive ones don't :D

Maybe I should be bugged that the discounted units are on one side of the building but it doesn't seem like a bad compromise in order to get more units made available. I've always assumed the "affordable" units are the ones that would fetch the lowest market price regardless.

They have modern windows which will block out the highway noise. The view of the highway and surrounding area is more interesting than looking across the street at the side of another condo complex.

You have a point.

Deleted due to rfma

Looked at a map, its not a bad location, near stop & shop and station landing (if they ever do EMUs). It isnt the best neighborhood but I think that is gonna change soon.

Not 100% but the appartment

Not 100% but the appartment building is the one in the back across everett st right? So while it might look onto the turn pike over the parking lot, but its not the one RIGHT next to it. That Trac45 Luxery Building is closer to the pike.

Also, that being said, I do agree that the pike side might be the more interesting views, rather than the left over tenement tripple deckers followed by other high rises. Or is there another project for Hano St that I don't know about?

There is no "good" view here

Would you rather have a view of:

Is it really a bad view

Is it really a bad view though? It's an urban view, so sure, it's no waterfront property or mountain vista but being able to see out your window and not have it be the brick (or concrete) face of a building next to you has to be worth something.

The preferred units will be

The preferred units will be on higher levels.

The Pike is in a trench at the foot of the building. You'd have to hang out the window to see it. The view is of Allston.

Oh man, I bet those windows

Oh man, I bet those windows facing the pike are going to get grimy as hell though.

But I think in some jurisdictions the developer submits plans and the city chooses the affordable units at random, to keep them from doing just this.

IDK if that's the case in Boston.

Leveraging affordable housing with R&D makes a good deal of sense (Cambridge could do more of this?). So does sharing parking between commuters and residences (i.e. if people drive to work who live there, their spot can be filled by someone coming in).

I'll give one Twin Donut to

I'll give one Twin Donut to anyone who posts a non-staged photo with that many pedestrians on Braintree Street once this building is finished.

Now with all of this great transit-oriented development, it would probably be a good idea to provide transit.

With this latest proposal and the innovation village proposal just across the Pike, this is now about maybe 10 blocks of high-density mixed-use development centered around the Boston Landing T stop, which is great planning. But maybe we should be boosting train frequency on this segment instead of, I don't know, dramatically cutting it and eliminating weekend service? All of these people aren't going to cram on to the 86 and 64. And, yes, those cuts are announced as being temporary, but it's also true that service will only be added back as budget allows.

The vision that we should commit to for serving this neighborhood is the proposed high-frequency electrified 'urban rail' line, aligned with the development timeline for the area. Also, the proposal for a connection across the Grand Junction Bridge into Kendall and North Station could start at Boston Landing instead of the future West Station.

Boston Not Calling again
Allston's GAP student warren could get 17 floors of neighbors
Cab-company owner seeks to replace his Allston garage with condos with roof-top gardens
Zoning board rejects 166-unit apartment complex on Cambridge Street in Allston
Developer to file plans for a 14-acre R&D complex with a hotel, apartments and a conference center on Harvard land off Western Avenue
Allston eatery invites maskless diners; warns Collier County code-enforcement officers to stay out