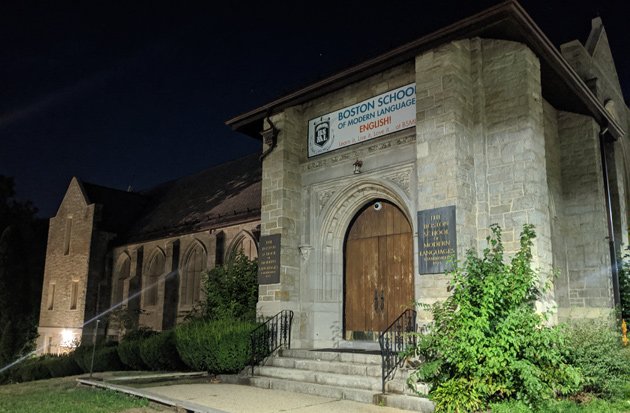 The owner of the one-time church turned school of English behind the Roslindale Village commuter-rail stop has sold it for $2.28 million to an academy based in the Longwood Medical Area that prepares bright but under-educated Boston eighth graders for high school.

The sale of the home of the Boston School for Modern Languages at 814 South St. to Beacon Academy was recorded last week at the Suffolk County Registry of Deeds.

The school, started in 1925, had long been based in the Back Bay. In 1972, Countess Ute DeMarco Von Haller, a German native who lived in Gloucester bought the school with her first husband. In 1984, she moved it to the former Our Church of the Saviour Episcopal Church in Roslindale, where students, some American, but more from overseas, learned English as it is spoken in the Middle Atlantic, rather than in its Boston or New York variants.

Von Haller died in 2011; the revocable trust that owned the building and sold it is based in Wenham.

The building's new owner, Beacon Academy, runs a 14-month-long "jump year" to help students bridge the gap between what they know in eighth grade and what they need to know to do well in high school.

What about the traffic?

Those kids will be really, really messing up the T.

Those kids are not from the neighborhood.

I hope they get a better reception than ROXBURY Prep (Screaming and Fainting Heard Off In the Distance) did from the local area.

This is not the part of

This is not the part of Roslindale with people fighting Roxbury Prep. That’s further up Belgrade Ave at the West Roxbury line.

Now on this, we can agree.

I was in Roxbury Prep back in February. It was frightening to think of all those kids I saw studying, laughing, conversing with teachers and just being teenagers destroying West Roxbury with their laughing, studying, and conversing.

Typical, you only care about West Roxbury and nothing at all about all the residents in Roslindale who will be far more impacted by this school of, just guessing based on Belgrade signs, meth addicts and pyromaniacs?

My Love of Croatia

Makes me cringe each time I see the word Belgrade. That's the bias.

I know a lot of kids who

I know a lot of kids who deserve this and are hungry for this. Anything to help them succeed and make there futures better.

Because there's already a school there. Also, note the abundance of transit options, to the tune of 10 bus lines, in Roslindale Square.

Now compare to Roxbury Prep: currently the site of a (very inactive) used car lot. Also, the mid-day transit options (2-3pm being a typical dismissal time) are poor; the 35/36/37 are each scheduled to run every 40 minutes on an uncoordinated schedule.

I had never heard of this school, being neither in the target demographic nor in the donor pool. It sounds like a great idea to me. This little ex-church is such an attractive location, and the price is relatively low considering its size, solidity, and location.

When you consider how many private school families "redshirt" their kindergarteners, taking a "jump year" won't even result in the kids being older than their classmates.

I'm glad this story ended up on the front page.

Interesting that you used a demeaning ethnic stereotype yesterday on UHub and nobody said boo?

I had a reply, but it disappeared.

I think their program is very interesting, fascinating even. I would not have thought it up, but it makes perfect sense and it's applied at a good time educationally. Given the prevalence of "redshirting" among private school parents, the kids coming out of a "jump year" won't even be older than their ninth-grade peers.

It is a very clever idea because private schools need to recruit poor minority kids just to keep their accreditation, and so there is a demand for Beacon's graduates. I'm sure the donors see that their donations are being applied very personally and effectively, instead of just disappearing into a giant slush fund.

The location is also excellent. It's not hard to get there by T, and it's a lovely, dignified building. I bet the students are going to feel very good about going to school there.

I would never have heard of Beacon Academy but for this post, because I am neither in the student target demographic nor the fundraising target demographic. Given the poor options for education in Boston, Beacon seems like a great opportunity for many kids. I'm glad it ended up on UHub.

As for you getting your panties in a twist because I said the word "shillelagh," get over yourself. Nobody said boo because it's got nothing to do with anything resembling an ethnic stereotype. It's just that someone suggested two pols would have to fight over an ambassadorship to Ireland -- which, you might be surprised to learn, has its own language and traditions, among which the shillelagh:

The shillelagh was originally used for settling disputes in a gentlemanly manner — like a duel with pistols or swords. Modern practitioners of bataireacht study the use of the shillelagh for self-defence and as a martial art.

Calm your jerky knees. You're going to give yourself a black eye.

The Irish Have Their Own Language?

I had no idea. Thanks amadan, and yes you were using an ethnic stereotype in a derogatory way. You can't get out from underneath that. Briseadh agus brú ort.

Johnny, you're going to have to take a ticket to stand in the imagined grievance line. And your ticket's not coming up soon. Be sure to be helpful to the people in front of you.

Anything else you want to spout on about why not admitting your ethnic slur?

"Irish" is not a race, and "shillelagh" is not an ethnic slur.

Now don't you have to go out in the Rotary and scream ALL LIVES MATTER or something?

Hey, when you go to McDonald's today, make sure you order a McSlurry. It fits your hatred and stereotyping of the Irish well.

Also, to continue your stereotyping, at the BLM rally in my town a few weeks back I bought popsicles, ice, and water to all of the BLM people while they got screamed at by the Back The Blue, um, people. Not patting myself on the back, but just here to remind you that you used an ethnic slur against the Irish and you can't believe that someone who called you out on it is right, so you assume that I am a Trumpie. Nice failure by you on many tangents.

OK, time to close the comments on this one

Boy talk about a detour!

I keep coming to the comments on this with the hope that dmk writes a history of the property. Instead, we get completely unrelated comments.

Zoning board approves Roslindale marijuana shop, but sets limits on days of operation to keep it from grating on the neighborhood
The Burbs Are Hot in Boston - Here Are 4 of the Best Suburbs to Live
Man charged for attempted car break-ins in Roslindale; police say he tried to use a passport stolen in an earlier break-in as ID
American Legion Highway between Franklin Hill and Canterbury remains a tire-destroying menace
Court says FBI documents shared with local investigators become 'public records' in Massachusetts
Sartre's sequel to 'No Exit' is less well known today