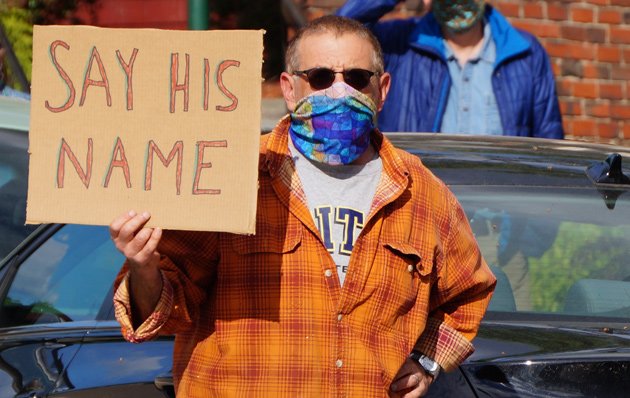 Some 200 to 300 people, most from West Roxbury and Roslindale, gathered around and near the Holy Name Rotary this afternoon for a vigil to remember George Floyd and other murdered black people.

Fearing the worst, the owners of several businesses along Centre Street, as far away as the Corrib Pub at Lagrange Street, had crews come in to board up their windows, just in case. The CVS was both boarded up and shut by 4 p.m., an hour before the vigil was to start. Sullivan's Pharmacy and Green T in Roslindale also put up plywood.

But the worst didn't happen at the vigil, called by Progressive West Roxbury and Roslindale, despite dire warnings by some West Roxbury residents of terrorists descending on their quiet neighborhood and demands that Mayor Walsh either stop the vigil or have the National Guard deployed, especially after people began posting what turned out to be some white-nationalist disinformation in the neighborhood Facebook groups. Instead, people held signs and clapped as one motorist after another pounded their horns in support as they rounded the rotary. 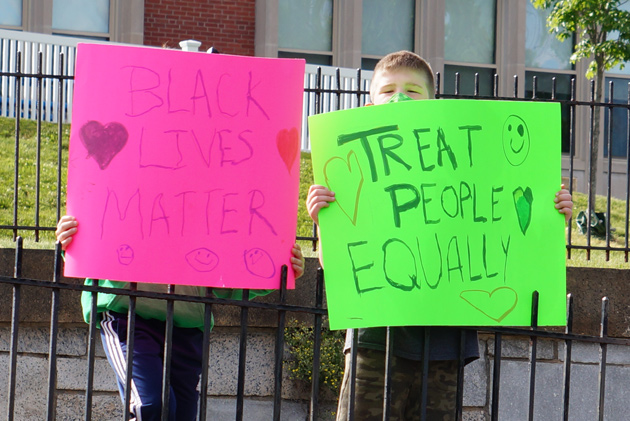 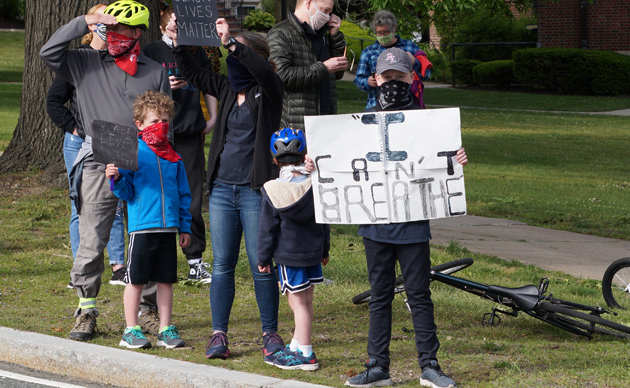 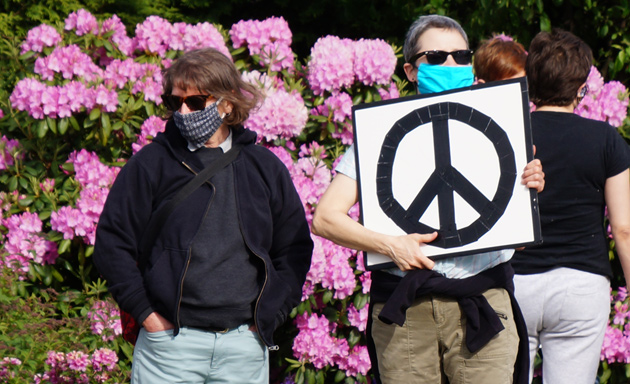 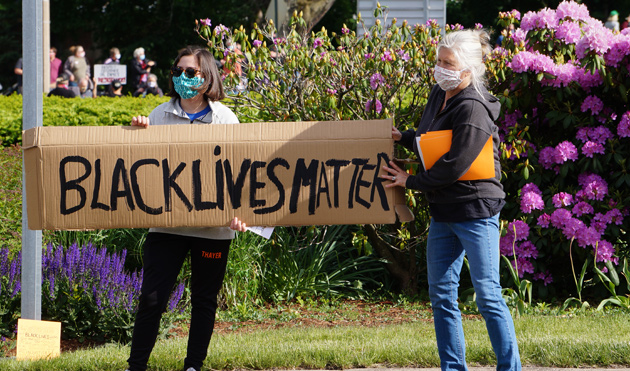 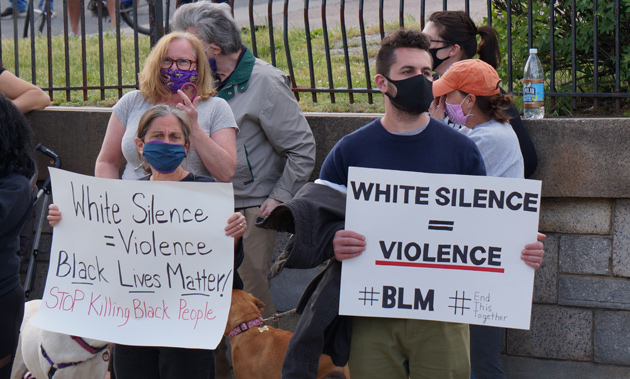 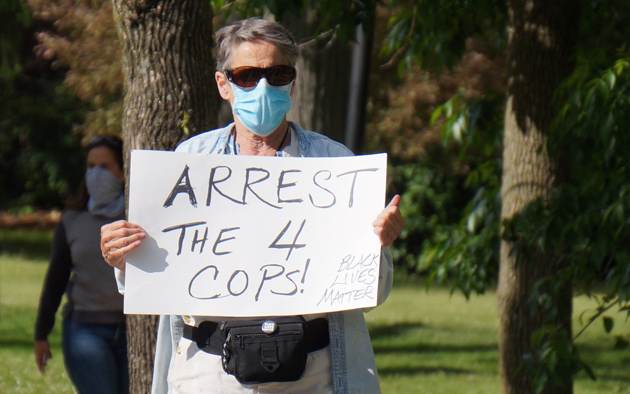 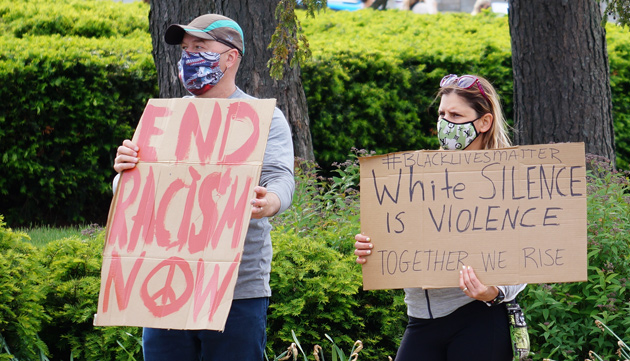 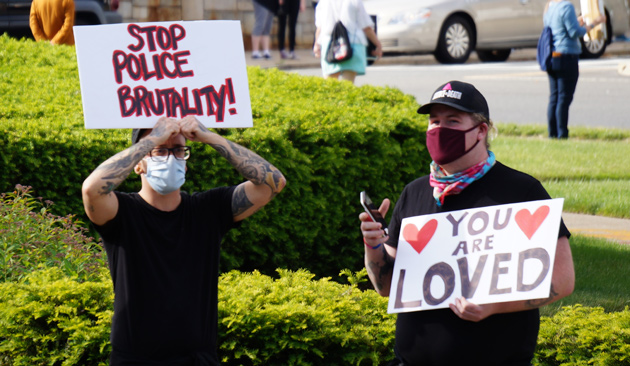 One guy circled the rotary with a Trump/Pence flag, stopping traffic a couple of times when the flag dipped over the roadway. But he didn't stay long, possibly because he was wearing neither belt nor underwear, which meant he only had one hand for the flag, because he had to use the other to keep his pants up. 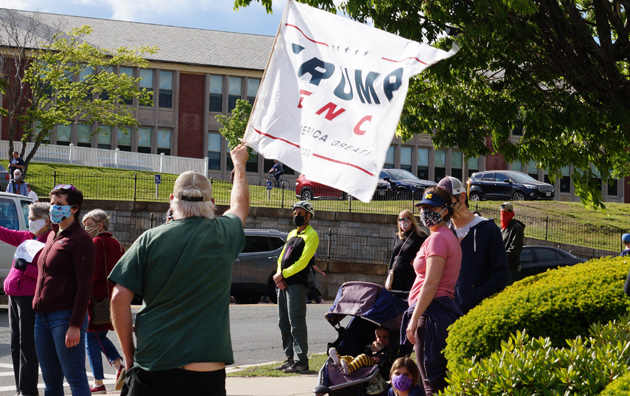 Police had a heavy presence but kept their distance. Some 30 baton-wielding cops stood along a barrier set up outside both E-5 and the neighboring 7-Eleven, whose supply of plywood came late - workers were still putting it up until the vigil was nearly over.

Several cops stood at the top of the steps to the main entrance of Holy Name; several more patrolled the grounds of the church school across the street - where a Transit Police team hauled a panopticon mobile tower that they briefly extended to test it out. Two K-9 units stood at the ready.

A dozen Quincy cops on motorcycles came through the rotary towards the end of the scheduled vigil, followed not long after by another dozen or so motorcycle cops from Boston and suburbs.

But police mainly stayed well away from the crowd, save for an officer going into the rotary to stop traffic so somebody could cross the street. 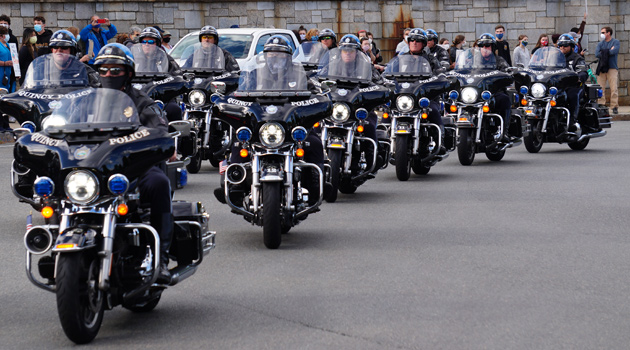 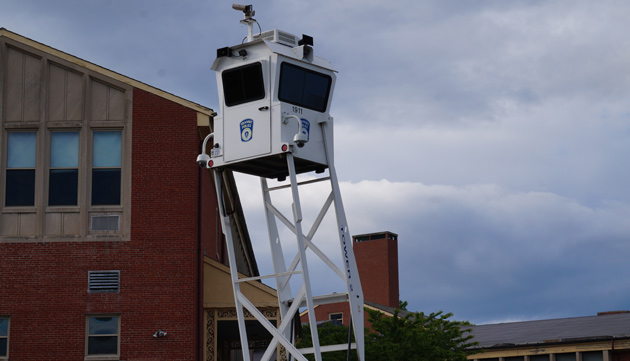 The crowds extended along both Centre Street and West Roxbury Parkway: 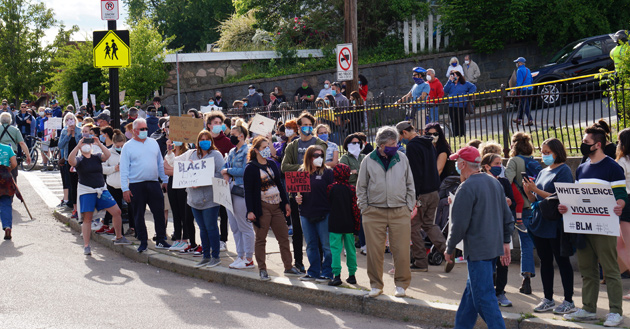 There was plenty of fresh plywood along Centre Street: 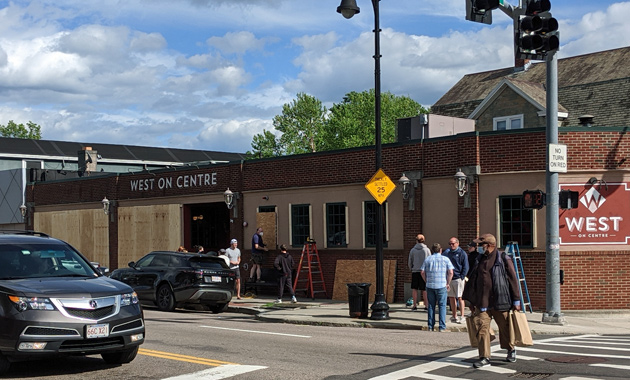 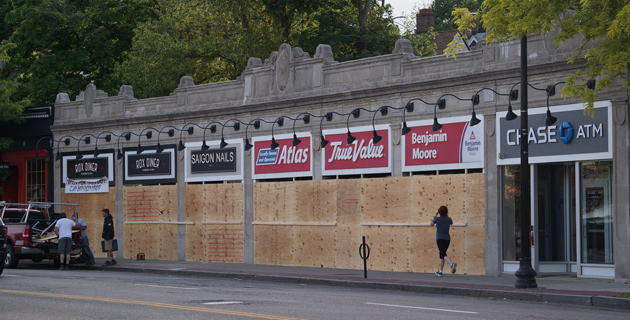 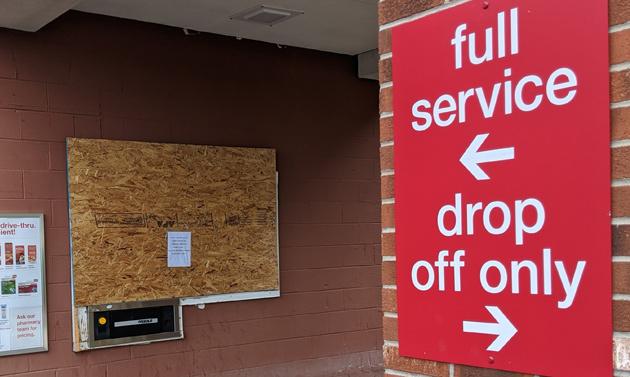 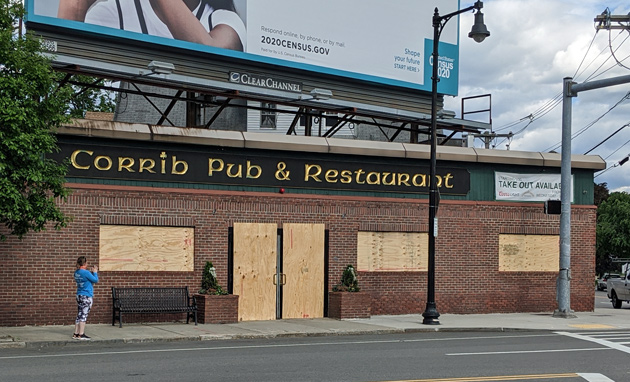 Himalayan Bistro went with cardboard instead of plywood: 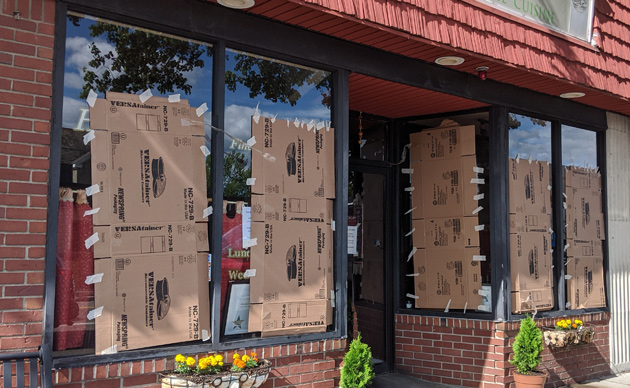 What an absurd overreaction

What an absurd overreaction by these businesses and some residents to what was clearly going to be a quiet vigil and promoted as such the entire time. The Chronicles of WR facebook group today was full of fear mongering and racism about this event, which on second thought means it was just like every other day in that group really.

and the troll posts from a fake “antifa” account, I don’t fault business owners for taking precautions that turned out to be unnecessary.

If the store isn't yours then

If the store isn't yours then you have no say.

Wasn't Sunday supposed to be nice and civil? What about the gang that tried to break into the Natick Mall last night who were twarted only because security was ready?

There are clearly groups of people looking to cause trouble and see these events as a great excuse. This is not black and white because honestly I think quite a few of these agitators are white kids.

Also if you think that none of the trouble causers on Sunday were from West Roxbury then maybe that's kind of racist. Are black people in black areas the only ones capable of riots?

I will point you back to my

I will point you back to my statement. I said that the trouble makers see this as an excuse to cause trouble. In many cases they come looking for events. So quite frankly it does not matter who is on the street protesting.

Ah middle class middle aged white people, no need to worry officers. Stand down. Elise will warn you if any young black men show up so you can put on the riot gear!!!

Until police drove into a crowd and started firing tear gas when people were dispersing.

Source on these claims?

Pretty sure right around 9pm Sunday instigators started throwing stuff to agitate the police and thats when things went downhill.

Also aren't you also proving that point by referencing the Virginia man incident?

the protest was peaceful. at the end, organizers urged protesters to be careful and disperse peacefully. then a crowd ran screaming from a police vehicle that appeared to drive into a crowd of protesters on Park Street, and police in riot gear with clubs came out #BostonProtests

Looking around for how your

Looking around for how your comment is connected to mine.

I won't even get into everything else you said because it is a clear misdirection.

I do find it odd though that you connect the looting of the Uggs store and Concepts a mile or more away from the State House and whatever happened at the State House as one in the same. Those cars pulling up to grab all those shoes, where were they parked at the Commons exactly? Were these protestors that somehow managed to get away from the State House, make their way back to Nubian Square, got in their cars and then drove back to Newbury Street , thinking the whole time "Oh I am so upset about racial oppression and what happened at the State House, I better stop by the Uggs store and see if it is open, oh look a 100 percent off sale I better jump in and take a look"?

As I said, there would seem to be a decent number of people who attach themselves to these events and who knows where they will pop up. Look at the Natick Mall where there was not even a protest or the Recreational Pot Shop in Grove Hall nowhere near any protests.

There are 6-7 buses hanging at the State House, along with a State Police MRAP waiting for something to happen.

damn, that's a lot of money

Imagine that- we had to pay for 12-14 buses of troopers just to have those guys ready and waiting.

Still amazing that these crooks steal with impunity and the right wingers in this state still want to kneel at their feet.

At retirement Staties get a gold watch that is set for

Since based on the numerous cases of payroll fraud by the MSP, they apparently can't tell time, love money and hate accountability.

The plywood should be around the State House, the Court House and City Hall where the lack of leadership has led to this crisis. They all fiddled while Boston burned.

Why has the top cop running his mouth like he is? Doesn't he have to answer to ... um ... somebody?

It's become more and more

It's become more and more clear that the governors and mayors around the country are terrified of their police departments. Look at Bill DeBlasio running for office on "police reform" and then praising the "restraint" of the NYPD hours after they drove into a crowd of people, not to mention the countless beatings, tear gas, and 40 cal shot at protesters. If people in these positions are afraid of the police, how is the average citizen not supposed to live in fear of them? This is what terrorism is.

Look at how the state police have Baker by the balls. He's not afraid to call out Trump but he can't bring himself to make meaningful changes to the department widely known for illegal OT abuses.

And before Baker they owned Patrick and Romney. It's amazing how no one in elected office will dare confront them.

Or the park bench? You make it sound like DTX is now reduced to rubble.

I hope they don't throw that plywood out

Good chance they will need it by the time hurricane season is over.

Maskless Republicans with a microphone get West Roxbury restaurant hauled before licensing board
House on fire on Washington Street in West Roxbury
As apartments go up around him, owner of convenience store on VFW Parkway in West Roxbury seeks to add full liquor stock to his beer and wine
Reclining is cold comfort at Millennium Park these days
Election roundup: JP, West Roxbury candidates to meet in online forum
Looking for a bite to eat or maybe just some lovin' at Millennium Park