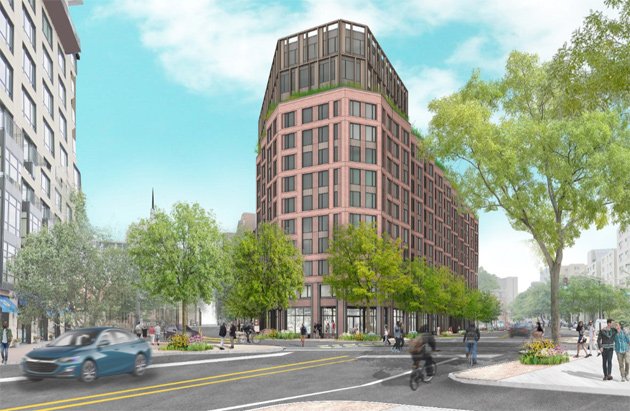 Related Beal this week filed its plans for turning the current 1.2-acre Benjamin Franklin Institute of Technology site between Berkeley, Tremont and Appleton streets into a mixed-use complex featuring a new 13-story, 241-bed building for seniors and reuse of the existing Franklin Union building for office space, once the institute moves to its new home on Harrison Avenue in Roxbury.

Under the developer's plans, filed with the BPDA, the existing Appleton building would be converted into 18 "income-restricted" residential units and a ground-floor cultural space for a non-profit. 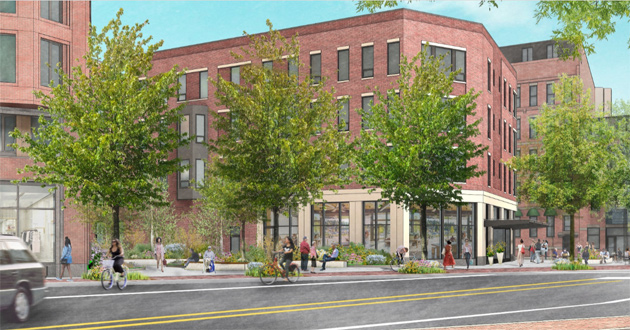 The ground floor of the senior-care building, at the corner of Berkeley and Tremont, would be leased as retail space.

The existing Project Site is currently not open to the community, except on limited occasions. The Project’s design will create a new permanent outdoor plaza at the corner of Appleton and Tremont streets that connects to a landscaped open space that traverses through the Project Site to Berkeley Street. Streetscape features including street trees, landscaping, light poles, trash/recycling receptacles, public bike racks and benches will be incorporated and/or enhanced as part of the Project’s associated public realm improvements.

Related Beal says the timing of construction depends on completion of the institute's new building in Roxbury, but that it hopes to begin 30 months of construction in 2022. 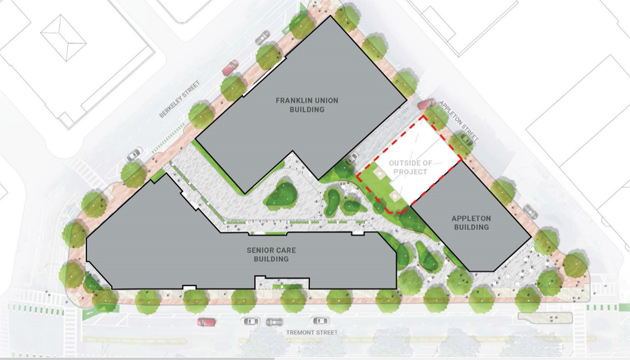 I would love for anyone to find fault with this plan for this underutilized urban space (besides the facade, which is done to blend in with the brick of the South End, the colors of Atelier 505 and the place with all the parking in the middle of the city to the east).

I do have complaints about the gross exterior but what options would have been better? The concrete covering Castle Square across the street? Probably not.

The space is not underutilized. Only so in the eyes of people who see opportunities for personal profit in destroying historic and environmentally beneficial green space.

This is one amazing building as is. If the Ben Franklin Institute wants to abandon the neighborhood, that is unfortunate and a loss for the neighbors and students and faculty.
There is however, no reason to engulf this building with more architectural trash and gut it.
It can be converted to the same uses and the auditorium and magnificent lobby retained.
The only change to the outside should be to make the park open to the public at times of the day. There are magnificent trees and ivy.
If the trees and green space along Melnea Cass are being saved from demolition, so can these here at the Ben Franklin Institute.

I suspect this Costello character is a propagandist.

Glad To Hear From The Lower IQ Set

Historic Green Space? - It was created about 1972 because some urban planner took a burnt out building site and didn't know what to do with it. I guess you like lawns. Nice. Do you have a push mower? Do you have a John Deere cap? Probably.

You are like those idiots at the Nantucket Land Bank who are tearing down housing by the water to suburbanize a town.

Listen if you want to open up the lawn, save the building, retain a lobby, have at it. You will probably need close to $40M so I would get that kickstarter going post haste.

If not, you are just whining for the sake of whining.

The worst phrase in the English language is "Somebody Should Do Something". It means you are incapable of getting the job done yourself.

It’s not all about money.

Get a clue about life.

From someone who has money, always had money, and thinks they are wonderful in their own mind.

There used to be buildings

There used to be buildings along Tremont St in the past (rowhouses similar to what we see elsewhere further down the street.) That stretch feels very desolate today and I think having buildings along the street does make sense to better connect that part of the neighborhood and enliven it with retail and housing. There will be a public park/plaza with many trees at the corner of Tremont and Appleton as well as a publicly accessible walkway with trees and plantings between the buildings designed as a pedestrian connection for the neighborhood to use. Overall, I think this is a big improvement over what's there today.

I walk that stretch often.

Many people do.
Desolate in no way describes it. Unless you are so afraid to be relatively alone for 5 minutes in a crowded city you can bear the solitude or the quiet.
Across the street are businesses and housing. That sidewalk is sometimes not wide enough for the people walking and hanging out. All you need to do is look across the street and be glad of the little breathing space you are in.

The only tall building in

The only tall building in this proposal is basically the same height as the existing building across the street, and half of the space it would be built on is a fenced-off patch of grass with some weird robotic solar panels on it.

Granted, the other half of the building footprint does have some nice trees that would be missed, but there's a big difference between trading 10 trees for several hundred units of housing, and trading hundreds of trees for a minor improvement to an existing bike lane. This is not a Melnea's Trees situation.

The developer should absolutely commit to replacing these trees, though, and with mature trees, not saplings that will die immediately because nobody waters them.

Strange use of the word. Have you 'abandoned' all of your previous homes to live where you do now?

The building needs millions in repair work, and wasn't working well as a classroom environment for the technical education BFIT provides. The profits will be used to build a new school building closer to where most of their current students come from.

Isn't hysteria when it comes to other people's money and vision for the future of many funny?

I'll bet a C-Note that somebody complaining about BFIT abandoning the neighborhood and its is not all about money wants the South End to be the nice little wealthy suburban town they grew up in. This person thinks any change is very bad because its not their vision of little cafes and throw pillow shops, despite that version of the South End only being about 25 years old and even less on some streets.

Meanwhile BFIT is taking a vacant site on Harrison Avenue, infusing a lot of cash, and adopting itself to not having a school for auto mechanics and drafts people in a building built for when electricity was a new thing. Another group of people is taking a lot of cash and will provide housing for people who are aging in the area and really can't make it up the stairs of the house on Appleton Street they bought in 1982 and restored.

But, you know, save the 4,000 square foot heavily fertilized patch of grass. I guess.

Take that C note you now owe me.

And make a donation to the Pine Street Inn.

If I'm reading the plans correctly, the miniature version of Symphony Hall that is attached to the current Franklin Institute is left untouched. Is that right?
That would be the biggest concern I have for that block.

The small-scale version of Symphony Hall is a treasure. Will it be preserved?

I didn't mean to say yes. All signs point to no.

Guess things ARE back to normal in Boston.

The auditorium is used for many different events. I’ve been to concerts there.
It has amazing acoustics.
Your comment is laughable.

Who used the auditorium?

Universal Hub is where I first learned that it existed, and that was only last year. I get a fair amount of email about various concerts but don't recall ever being invited to an event in this location.

it is explicitly being removed to make room for the longer building. One of the new buildings will have such a space - I don't know if it will be faithful to the current space.

Yes it will be preserved and

EDIT: Sorry, I misunderstood the question. I thought the question was referring to the building, not specifically the auditorium. The auditorium is not being preserved in its current form. The back part of it is proposed to be demolished and the rest turned into a lobby.

---
Yes it will be preserved and restored and converted into an office building. The current auditorium will be turned into a grand lobby with an ADA accessible entrance from the street. (Although the developer is proposed to chop off the back corner of the building/part of the auditorium to create space between this building and the new one along Tremont St.)

It does not sound like it will still be usable as an auditorium, or a recording studio, after those changes.

The building has a gorgeous lobby already.

Sounds like you are saying that will disappear and so will most of the auditorium. Which, of course, will no longer be useable as such.
So your response should have been no.

What happens to the performance hall?

What happens to the performance hall?

A comment on a previous thread said it was a scale replica of Symphony Hall, with acoustics every bit as good.

Overall, this looks like an excellent proposal that blends in quite well with the neighborhood. The facade could use a bit more tweaking IMO but it's at a better starting point than many proposals I've seen! I'm sure there will be lots of debate about the height of the building on Tremont St, as the proposal is higher than BPDA zoning and Historic District zoning.

Being excellent because it is better ...

.... than many other proposals you’ve seen is hardly a winning point. In fact, it lumps it in with the others. We don’t have to accept anything that is a good proposal.

...Or we could not develop every inch of the city. Just saying.

Will it have a kite store?

Will it have a kite store?

Thank you for taking care of

Thank you for taking care of seniors........and allowing them to feel safe where they will live.

I'm curious what all you amateur architects and urban planners would prefer to see there.

I honestly don't know the perfect answer, and suspect there isn't one that would please ya'll. This plan looks ok.

Be charitable. Be happy someone's building elderly housing. Be happy there is some degree of planning and oversight.

... sloppy seconds. Boston can do better than this and we know it.

A pity to lose the auditorium & lobby

They are beautiful. The lobby has held up well, the auditorium is tired but the bones and sounds of a great hall remain. The best I can say about the proposed facade is that it is bland. I understand why FIT wants a new facility. The current structure really does make it harder for students to learn and staff to teach, and doubtless the operating costs are high. I do wonder if, by moving institutions that serve poorer populations away from the center - geographically, but also where the leaders of political and economic power operate - something is lost. Less contact, less visibility.