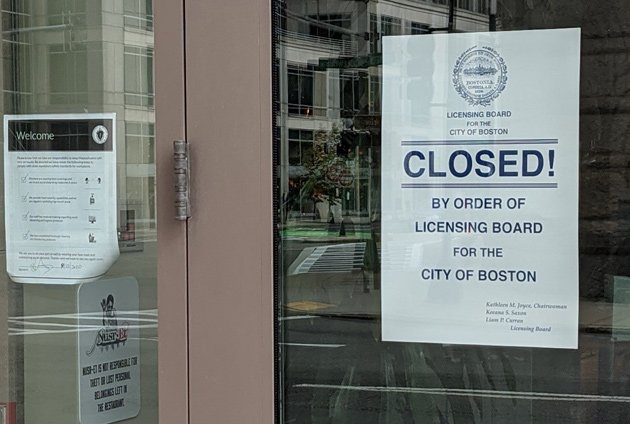 Salt Bar's joint is closed for now, on city orders.

Boston licensing officials ordered the Nusr-et steak place in Park Square shut less than a week after it opened, for violations of city and state Covid-19 and fire regulations.

Separately, an ISD health inspector cited the 100 Arlington St. restaurant for several violations - including opening without a health permit on Wednesday, although most had been fixed during a followup inspection the next day.

Nusr-et faces two hearings on Tuesday morning before the Boston Licensing Board.

One of the hearings is for a citation issued on Sept. 18 - the restaurant's first day - for violating a state order banning lines outside restaurants due to the risk queued people could spread Covid-19. Several Covid-19 complaints were filed with 311.

The second hearing is for a citation issued on Sept. 23 for having two blocked fire exits - just a block from the scene of the infamous Cocoanut Grove fire that to this day remains a major reason for Boston's vigilance over blocked fire exits.

The board's hearings start at 10 a.m.

Meanwhile, on Sept. 23, an ISD health inspector faulted the restaurant for several issues in addition to not obtaining a permit, including "evidence that the [person in charge] is not overseeing day to day operations to ensure establishment is operating in compliance with the food code."

A follow-up inspection the next day showed all the problems had been fixed, except that the dishwashers remained set with their water temperatures too low.

"just blocks from the scene of the infamous Cocoanut Grove fire "

Meaningless when everything in Boston is just blocks away from each other.

OK, I made it more meaningful

Salt Bae's joint is actually only about a block away from where the Cocoanut Grove was. Walking directions.

"Instead of Cocoanut Grove, we can stop in at Napoleon's just a few doors up. And since it's Saturday, the dance floor at the upstairs bar, Josephine's, will be open."

Next weekend wer'e going to Luxor on Church Street.

The Other Side and Jacques

The Cocoanut Grove of course burned down, but after that was The Other Side, Jacques, Napoleon, and later Luxor . Dancing, sex, drugs, alcohol, and prostitution, all with a large dose of drag. And all within a stones throw of each other.

Are restaurants in the

Are restaurants in the vicinity of the former site of the Coconut Grove more susceptible to fires?

But I'll drop this here since it's as good as any: if the Boston College football team had won that night, the death toll would have been significantly higher. But they lost to Holy Cross and cancelled their party at the nightclub.

The curse of the Coconut

The curse of the Coconut Grove lives on. Watch out for Buck Jones.

Isn't the health permit the basic thing one needs to open a restaurant, and has been required for decades? How do you even start planning to open an eatery in Boston without finding out what permits one needs?

Hate to see the looks on their face when they find out about the collection of meals taxes.

If Fire gives you the OK

You could roll the dice and open the doors.

Mr. Scanlon used to pop in, check the place out, sign the permit, and the doors would open 15 mins later.

From the list of violations it seems obtaining permits is the last thing on managements mind.

Perhaps a few too many at the soft opening?

This guy is definitely a move fast, break rules nitwit

It always ends the same - corporate buy out or bankruptcy where he clears a ton of money and his investors get hosed.

The world doesn't revolve around this country's rules.

Running a restaurant in Boston revolves about something much more specific and local than 'this country's rules' - local code and health policies.

This is a fascinating take - can I just open a cafe in Paris and demand that I get to pay waiters $4/hr plus tips without health insurance because I'm not from France?

A tale as old as time.

It usually involves a rotating cast of characters (insert generic restaurant group LLC) that open big, dont pay taxes, abscond with wages, then pop up 6-12 months later as an investor of a new "group" that opens one or more places, takes the cash, closes the LLC, etc...

There are 3 of these (ahem) organized LLC groups I can think of that all have drifted in and out of several places under questionable circumstances and still operate today despite being chased out of back bay and retreating to the north end not that long ago.

Maybe don't give your money

Maybe don't give your money to a guy whose claim to fame is getting made fun of online?

This guy is one age-of-consent rant away from evolving into the final form of the douchebag libertarian entrepreneur.

When the ISD showed up on day 5, and found a bunch of serious health violations on top of the restaurant NOT HAVING A LICENSE TO OPERATE, why didn't they close his doors for him? He has a long and proud history of ignoring every regulation he doesn't like, and has apparently decided to start picking fights with Boston literally from the day the place opened. The only language these idiots understand is dollars. Shut him down until he proves he's not going to be a hazard to his employees, his customers, and his neighborhood.

If I'm not mistaken, the ISD shuts down restaurants until they've been corrected and brought up to code, correct? Unless he's got the goods on someone (or something) within Boston, he should not be pinching his fingers on anything until he conforms with the laws everyone else has to follow.

Update: Bah...talk about not reading the article. It looks like they've closed the restaurant.

On an unrelated note: I went to Falafel King yesterday - before Covid Times, they would hand out a free piece of falafel with some hummus while they made your meal (which was excellent, BTW). Are restaurants forbidden from giving out free food samples due to current health situation?

Yup, you're right... I read all the linked complaints and citations, but failed to notice the giant picture at the top of the article. Good on you for actually enforcing the rules, ISD.

The photo wasn't there at first

When I first wrote the article Saturday, I found the citations, but nothing that said specifically the place was closed, so didn't write that.

Then I drove up to Arlington Street today, and took the photo and changed the story.

You might be a racist for this take. He's not from here so gets to do things his way.

As is having a certified food

As is having a certified food safety manager on the premises. I'm pretty sure the sale of just 1 of the steaks he sells would pay for a couple of employees to take the ServSafe manager course and exam.

Is this one of those

Is this one of those bureaucratic issues where one city agency says, “Here’s your permit. Congratulations on your new business!”, but they don’t bother to tell you about the other permits required by other city agencies?

Yeah, it’s the business owner’s job to know The requirements. But at the same time, the city should support small businesses by making it easy to get this information and hard to screw up the process.

No, he can't play that card

That was an issue in the Menino days with like Dominican immigrants trying to open a small place in JP. ISD almost seemed to delight in screwing people like that.

But that doesn't happen anymore, that I can tell. Also, when our Bae applied to buy Liquid Art House's liquor license in March, he was represented by Dennis Quilty, who is probably THE licensing lawyer in Boston. No way are you going to pay his rates and not be told about all the permits and requirements to open a Boston restaurant.

You can’t file for your building permit until you apply for your health department permit . My guess is they filed for a health perdidn’t complete the inspections. Maybe somethings changed but you couldn’t go pick up your liquor license until you had all your permits signed off.

I know they say everyone has their "15 minutes" but I give this place 8 months.

If no health permit, why weren’t they shut down?

A restaurant without a health permit should have been cleared of patrons until they got one. They were not even compliant with the standards, so not a technicality.

Otherwise, what is the point?

They are shut down

Example of the contemporary philosophy:

Act now, ask for forgiveness later. After people have become sick or died.

And if enough money is behind you worry not, you can manipulate bankruptcy rules or know folks in high places, do not worry.

Perhaps it is a century issue. Seems that at federal and state levels we are back to a repeating the corruptions of the early 20th century. Where money, power, wealth are given preference to everyone else.

They're more concerned with fixed issues here, than they are with the mess on "Methadone Mile."
I wonder who didn't get their palms greased?

And what would you have the licensing board do?

Boston's a big city and has a big city government. It's possible to have a board that exists to consider health and safety issues at restaurants, no?

And your suggestion is?

These are completely different issues. Oversight of licensed premises is very different than figuring out how do deal with mental health and substance abuse issues.

The restaurant is amazing will be back

The restaurant is amazing can’t wait to be back after it re-opens, the dude is a celebrity and people were out of control but the food is amazing

The Globe gave you props

The Globe story noted that this was first reported here!

Gotta respect the licensing board for their passion.

Barbara Walters, Brookline native who became international reporter and interviewer, dies at 93
Legal plans return to Park Square
Boston getting LED-powered 'gas' lamps
Board approves permanent home at Park Square Castle for giant 'immersive' video art displays
Entering one Bay Village cabaret will soon be a bit of a drag without a vax card
It wouldn't be a Donna Summer disco party without a disco ball