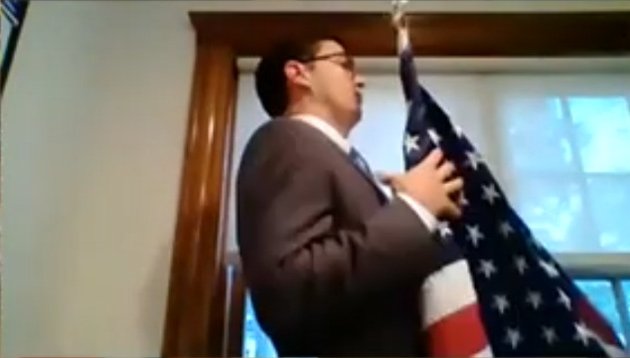 Loconto unfurling a flag to start meeting with Pledge of Allegiance.

The Herald reports Michael Loconto resigned as chairman of the School Committee this morning amid growing uproar over "hot mic" comments he made in the middle of last night's lengthy meeting on suspending the exam for exam schools for next year's class - and just a few hours after his vote on the exam question, which he called "the proudest moment I've had in my 18 years in public service."

Around 11 p.m., in a Zoom meeting that started shortly after 5 p.m. and would continue until almost 2 a.m., Loconto, a West Roxbury resident appointed to the committee by Mayor Walsh in 2014, was heard saying some nonsense syllables that appeared to be mocking African-American first names or Chinese last names. Both African-American and Chinese-American residents featured prominently during the meeting's roughly eight hours of public testimony.

I did surface the relevant piece of tape in which Loconto seems to mock commenters' names after executive secretary Elizabeth Sullivan reads them out. (Sorry for the delay — lot of news last night.)

A warning that the tape may offend some listeners: pic.twitter.com/E63j7q08WL

Not long after, after getting texts from friends, Loconto apologized. He said he was talking about a book with somebody in his household and did not realize his Zoom microphone was on - but emphasized what he was saying had nothing to do with the meeting. He later declined to answer one resident's question about what book he was reading, and apologized again at the conclusion of the public testimony.

Around 10:15 this morning, Loconto tweeted: 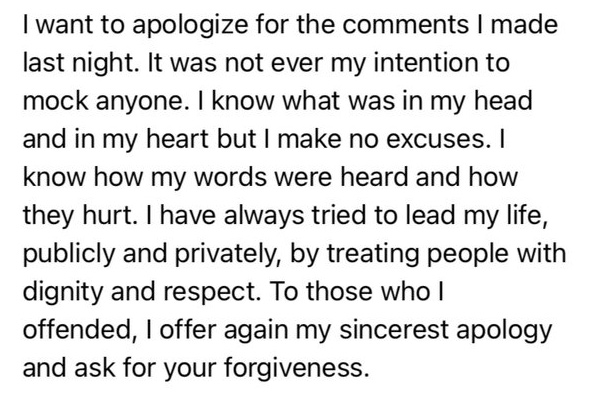 not surprised, that guy is a weirdo

he's got a very clean cut, but oddly unsettling gaze about him so I really can't say I'm surprised he'd be this vile.

I'd love to see his various Twitter and 4chan posts, because you just know he tosses a few back and has lulz making fun of jewish and african americans.

It was not my intent to mock anybody

My devotion to improving my table tennis game is sincere.

We need the video!

Video clip in this story

You mean you haven't read the classic children's book "Shineea, Shinaya, and Boo-Boo?"

It did kind of sound like that Denise Chaila song

But something tells me Mike Loconto (like the rest of you) hasn’t heard it.

Yeah, he had to step down after that. No question.

Making fun of names is an old old bigot game.

In an era where we have a "Kayleigh" lying for the liar in chief, and playgrounds full of kids named "Maddesynn" and "Lakynn" and "Tundra" and "Jaxon", and sixty seven "creative" spellings of Michaela now entering the workforce it all strikes me as a bit obtuse.

That is actually a cool name. People who name their kid Jaxon should be examined.

This city’s long history will not change until the hate that is imbedded in privileged households stops and guys like that could keep there jobs. Unlearn to hate.

Ignorant, tone deaf, stupid too. But I think jumping to "hate" is a bridge too far.

Of course it is

Because we are not a hateful people.

Let's just call it light disrespect with a heaping dollop of systematic disdain.

It's only Hate if it's produced in the Hate region of France.

Another one of these bogus

Another one of these bogus apologies by a white person where the focus is on the people who were offended, rather than the things he said.

Is he related to the Karen in Charlestown who...

continually posts on 311 of all places, her disgust at the BLM sign in the neighborhood library branch and has lately escalated to threats of posting an All Lives Matter sign in the same spot.

I thought what was "in his

I thought what was "in his head and in his heart" was apparently a book he was talking about. Or is he just a reflexive liar on top of being racist? :)

A shining example of why

A shining example of why Boston is so popular on Saturday Night Live.

Such a tired trope.

I'm not saying it doesn't exist...but when people talk about "the progress we're making" when such glaring evidence of continued problems exists, it seems appropriate to ask for equal evidence of "progress".

He's gone and on the bright side, he didn't Toobin

Toobin was my first thought,

too. I've been on Zoom calls for eight or ten hours a day since the lockdown started, and I have yet to experience anything as egregiously awful and self-owning.

I had one slightly red-faced-afterward moment early in the move to seven-days-a-week remote work, hosted a company-wide call without a virtual background, had a round mirror with a wide white frame behind me on the floor (awaiting re-hanging on another wall) that some colleagues said looked like a flipped-up toilet seat. It kinda did! Always a virtual background since.

Well, he didn't pass the test

Well, he didn't pass the test.

In 2015, Mike (Loconto) served as Deputy Director for Policy & Compliance in Harvard University's Office of Labor & Employee Relations and as the University's first Youth Protection Officer. Mike also served as Associate Director of Labor & Employee Relations at Harvard for the previous eight years, and has also served four years with the City of Boston as a Staff Attorney in the Office of Labor Relations. In 2014, Mike was appointed by Boston Mayor Martin J. Walsh to serve a four-year term as a member of the Boston School Committee. -- Curry College staff bio

Why is this being labeled "anti-Asian" bigotry when the names mocked by Loconto, translated in the caption as "Shanea, Shania, Shanaynay" seem more Afrocentric than Asian? It's also intentionally misleading for the media to omit that it was Mayor Walsh himself who appointed School Committee Chairman Loconto and hired him as Staff Attorney in Walsh's favored Office of Labor Relations. Marty hired this guy (twice) but that fact is left out of the coverage? As for Loconto's lengthy Harvard employment, no surprise at his racial insensitivity considering this is the same school that boasted Elizabeth Warren as the "first woman of color" at Harvard Law.

When he uttered those words, the School Committee was in the middle of receiving commentary from Chinese-speaking parents needing interpretation. The secretary was trying her best but still struggling to call those names (which is understandable), but clearly Loconto thought it funny...

Loconto, a West Roxbury resident appointed to the committee by Mayor Walsh in 2014

If your beef is with "the media", but not this medium, maybe you should give us some links.

Fish, shouting "Fauxcahontas" while accusing others of racism. Projection: it's just how weak, bigoted fuckheads like our President do.

I won't bother to repeat the long-established debunking of right-wing lies about Warren's assertion of her native heritage at Harvard, and whether it advanced her career there. Okay, one hint: if the first time your company hears about your ancestry is months after you were hired, I'm guessing it didn't help you get the job.

Never mind Trump's practically-from-birth record of naked racism. The Central Park Seven ad, which Trump has refused to renounce, is merely one smelly turd in the middle of a 50-year racism sandwich. Refusing to repudiate Charlottesville neo-Nazis is another. Trumpies: who do you think you're kidding?

Your reality is either fact-based or it's not. Life's too short to argue with the intellectually halt, the factually lame. Racists gonna racist, bigots gonna bigot: rational debate ain't gonna move 'em.

Chances are that Fish will be one of those sad old grandpas that the grandkids say, "So embarrassing, but he was born in a different time," and after he dies will be glad they don't have to deal with his retrograde bullshit at the holidays. Speaking from experience, nobody born in the 21st century will lovingly recall elders who were on the wrong side of history.

Yell at clouds while you can, Fish. Your time's just about up.

I want to know who hired you?

Was it Paul Blart or the food court manager?

Medication will help with your problem

You know, there ARE actually better ways of stimulating the beat of your shriveled heart than blowing racist dogwhistles until you're red in the face (as if you aren't always). Perhaps more to the point, if you stop being such a racist asshole all the time, there's a possibility that someone might call 911 when you have your inevitable stroke.

Aren't even that complicated or difficult to pronounce.

The kind of guy who thinks "Jennifer Hu" is a weird name has absolutely no place in public service in Boston.

that we don’t need an elected School Committe?

The school comm chairman! Outrageous. What a stupid moron!

We'll be seeing a skit about

We'll be seeing a skit about this on Saturday Night Live.

Recognize these firefighters from back in the day?
Antivax police sgt. Cottone defies mandate, gets special treatment
Firefighters say if they don't get something in exchange for required Covid-19 shots they will take to the streets - but promise not to stand outside the mayor's house screaming about Hitler
In written decision, judge agrees with unions that city's unilateral imposition of vaccine mandate was unfair, but still gives city right to start it on public-health grounds
Start of vaccine mandate for city workers pushed back a week
BPS students to walk out this morning to push for two weeks of remote learning