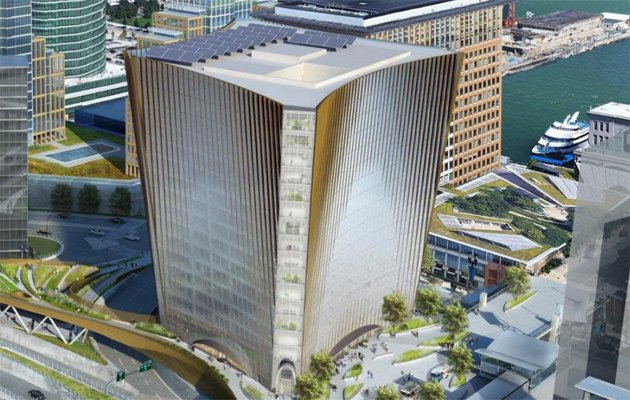 Developer John Hynes last week asked the BPDA for permission to convert several floors in a proposed 18-story building on Congress Street from office space, which few now want, to life-sciences R&D space, which is suddenly in great demand, both because of the Covid-19 pandemic:

The Proponent is seeking the modification in response to recent trends in real estate markets, which currently favor life science uses over more limited demand for office use in light of the uncertain long-term impacts of the pandemic.

At issue is the building Hynes and partners want to build at 401 Congress St., near B Street and the overpass to the World Trade Center. Hynes is seeking to convert seven floors, originally meant for generic offices, to biological research floors. The move would technically make the building only 17 floors, because labs need higher ceilings, so Hynes would keep the building the same overall height by lopping off its proposed top floor.

Hynes adds he does not envision the research floors to have permits for the most deadly of microrganisms, such as Ebola. He writes he envisions the floors would not be permitted for anything above "biosafety level 2" which includes diseases that generally do not kill most people who contract it, such as the flu, or which do not spread through the air, such as HIV. Work on diagnostic tests for Covid-19 is allowed in such labs, but not work that might expose staffers to large amounts of the virus, such as research that involves infecting animals with the virus.

The Boston University biolab near Boston Medical Center is licensed for research involving level-4 pathogens - the worst of the worst. More details on different biosafey levels.

In his request, Hynes said the proposal will continue to feature a "Great Hall" on the first two floors, as well as regular office space between the life-sciences floor and the top story, which would be used for the building's mechanical services.

401 Congress St., filings, including the change request and detailed plans and renderings.

This looks like one of those infamous buildings that give pedestrians sunburns.

All I can think of is the snow and ice falling from the top onto people walking below.

That building is absolutely hideous.

It's rather imposing. My

It's rather imposing. My impression is that it would served to overwhelm those walking by rather than inspire or impress in a positive way, but that's just my personal opinion.

I wonder where they got the idea for the shape or the facade? Maybe just over the river?

I guess it's curved instead of slanted, and the fins radiate in as opposed to out but the principles are the same.

More This Building Than Anything

That’s the first thing I thought of. The London skyline is comical. Between that, the Gherkin, and the Shard, it looks like it was imagined by a cartoonist.

COVID is causing a massive glut in available office space as people work from home and many companies downsize that won't be filled for years, so it makes sense he wants to cut the general office space in this building.

Life science is where the

Life science is where the money is, owners of these high rises see potential .

The solar panels on the roof

The solar panels on the roof are a nice touch!

That sure is ugly.

(my favorite part of the latest Godzilla movie was when certain buildings got trashed. Urban renewal by kaiju!)

I can't figure out what I'm

I can't figure out what I'm looking at at ground level. There's a spaghetti of highway ramps and maybe pedestrian overpasses or plazas. How hard will it be to walk from this building back to reality land?

Lots of empty office near

What tha? Big blow brings down trees and wires, floods streets, but at least gives us a nice rainbow
All it takes is a little puff of air, well, OK, maybe a big puff of air
Hobbesian battle erupts on Carson Beach; numerous arrests made at Revere Beach
Boston Latin School apologizes for student-written descriptions of two neighborhoods
They're cheep-er by the dozen
Motorcyclist dies in early morning crash in South Boston