Shopping downtown just isn't what it used to be 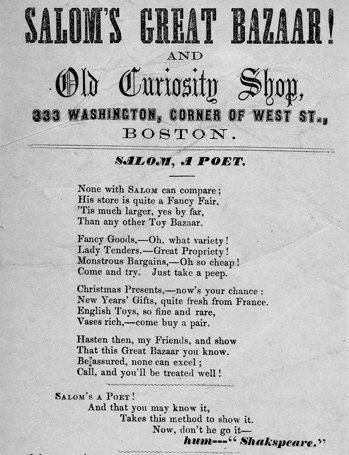 In 1860, Mark Salom had this ad printed for his shop on Washington Street at West Street (333 Washington, to be exact, a number that is now assigned to a building several blocks up Washington, near Milk Street).

Salom was one of the top men in the downtown curio and toy markets. Not only did he run a store, he was one of the few pre-Civil-War manufacturers of jigsaw puzzles. And he made magic oracle cards.

Salom was also quite the globetrotter before settling in Jamaica Plain: Born in the Netherlands in 1833, he married Wilhelmina Elizabeth Holyman in Tasmania.

In 1876, he sold his entire stock, advertised as filling two entire stores and including:

He went into the auctioneering business. On his death in June, 1880, the Globe declared him:

One of the best known merchants of Boston - a man whose geniality and kindly wit made for him a host of friends.

He may be said to have developed the Christmas business which is so extensively carried on at the present time, and his energy and enterprise have done much to keep Boston's men of business alert to their opportunities.

Sounds like the kind of place I would have gone into. :-)

I didn't know addresses could

I didn't know addresses could move.

But maybe the Great Fire of 1872 had something to do with renumbering?

This is a real gem.

This is a real gem.