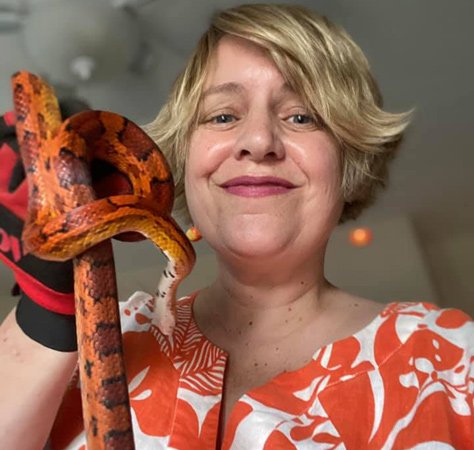 Cora Carey with the corn snake she briefly fostered. Matching dress a total coincidence, she reports.

On a quiet Friday evening, subscribers to the Keep Roslindale Quirky group on Facebook got an unusual query from Emily Wilcox Gonzalez:

We found a snake that’s now living in the undercarriage of my car. Anyone missing it? Roslindale Bourne area.

She provided proof of said snake: 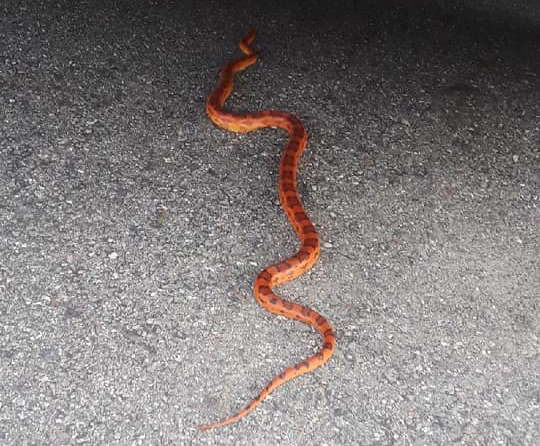 She promptly got some advice:

But it turns out that among its many fine attributes, Roslindale is home to a number of people who are well versed in snakes, why, some even keep them as pets. And so they recognized the supposed danger noodle/nope rope as a harmless (except to small rodents) corn snake and concluded that it was probably somebody's pet, because they're not native to New England, and their docility makes them ideal as a pet.

Andrea Howlett, who not only has two pet snakes, but who looks for them (and turtles) on walks in the woods, had some specific advice:

if someone can corral her into a pillowcase, then knot it closed, it will make her stay put. Pet corn snakes don’t tend to bite, and even if one did, it would be insignificant and feel like thorns.

Cora Carey, among others, offered to take the snake in.

Gonzalez updated that after an animal-control officer came and failed to make the snake drop out of the car - it did so by itself as night came. She followed Howlett's advice and got it in a pillowcase, which she made sure to knot closed. Hannalore Allison Tice came over to transport the snake to a spare terrarium she has - a terrarium with a snake-friendly "heat rock" - then Carey, who used to work with snakes, came over to "foster" it while the search for the owner continued.

The snake is currently contained in a terrarium topped with a tightly fitting screened lid, which is weighted down by a large coffee table book with two hand weights on top of it.

Then, Saturday afternoon, after Carey made a trip to one of the Dedham pet stores to pick up some frozen mice to thaw for the snake to eat, Gene Atwood called up the Facebook group:

He reported Venkman slithered away a year ago in May.

About a year ago I failed at locking the enclosure, and he managed to escape. I spent months searching the house and leaving out little treats (WARM DEAD MICE ON LITTLE PLATES), AND never had any sign of his existence. the enclosure was very close to the eaves of the attic so i always figured he got in there and perished in the fiberglass insulation or something. ... I had heard stories of snakes showing up after being lost for a year or more, but it is honestly, truly bewildering.

Corn snakes have unique markings, so he posted some of his photos and, sure enough, they matched with the snake Carey now had. 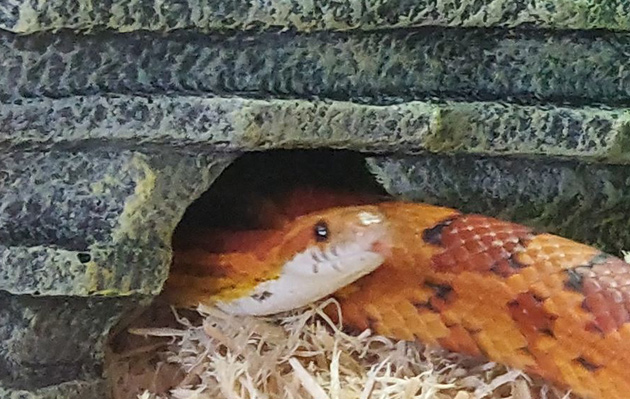 And as this was going on, others chimed in to report sightings of what they now knew as Venkman: From Atwood's home off Bourne Street, to Meyer and Florian streets almost clear over to Hyde Park Avenue (map of Venkman's domain along the JP line).

Carey and Atwood made plans to transfer Venkman today - along with the frozen "fuzzies" Carey would no longer need.

Way to go Cora. We grew up

Way to go Cora. We grew up swimming with snakes so I wasn’t afraid of them.
This prepared me for an incident when I was a 17 year old camp counselor. A little boy camper took his cabin’s snake and while I was sitting on the floor during a story hour he pulled out my collar & slipped it down ny back.
I calmly pulled the shirt out of my waist band which allowed the snake to slither away.
Thereafter every one of those little boys treated me with great respect!!

I suppose he must have been eating wild rats and mice all that time, with maybe a few birds here and there. Lots of dangers out there for a tame snake: Cars, people, hawks, cats, raccoons, maybe even poisoned rats. Amazing that he has been safely returned.

My wife raises the concern that Venkman may have lost his tolerance for being handled after living feral for a year. I hope he reacclimates easily. (Also, now he has had a taste of freedom. Gonna have to keep an eye on that orange Houdini.)

when you cross the snakes.