News that Ewan McGregor might show up here for filming of a Star Wars series based on the planet Tatooine has gotten local folks to wondering why Boston and the accommodations needed for our local mores:

Guess the drought had an upside

This is not the Dunkies you're looking for.

"Me, fitzy and Murph uh goin down to Taaashi Station fuh some beeahs, you comin', benny?"

If they were looking to film something set in a city that looks nothing like Boston, Seaport District would be the place to do it.

Well, Beacon Hill will fill in nicely as the "wretched hive of scum and villainy". Right, @MassGovernor?

(Interior scene: a packie in Fields Corner)
“Them Jedi ain’t shit. My cousin who used to know Whitey said they’re all pussies”

— Please hold applause until the end of this tweet (@Lallypb) December 4, 2020

All I know is that there'd better be a hologram of Mayor Menino as yoda:

"I'm a Jedi Mastah heah to pratect LOOk Skywalkah. Whataya think ya bettah than me? Friggin foace khed!" while hanging halfway out of a mercury marquis with the handicap placard on the rearview mirror

Neighborhoods:
Boston
Topics:
Entertainment
Ad:
Like the job UHub is doing? Consider a contribution. Thanks!

Boston, England will be the shooting location. I would have loved it here, but c'mon.

Tatooine is generally considered the @ss end of space. Not sure Boston needs that reputation.

WBZ reports that, yes, filming will be in Boston, England a town best known for a church called Boston Stump, which, on a clear day, can be seen all the way from Norfolk (England, that is).

The Fours is gone, khed 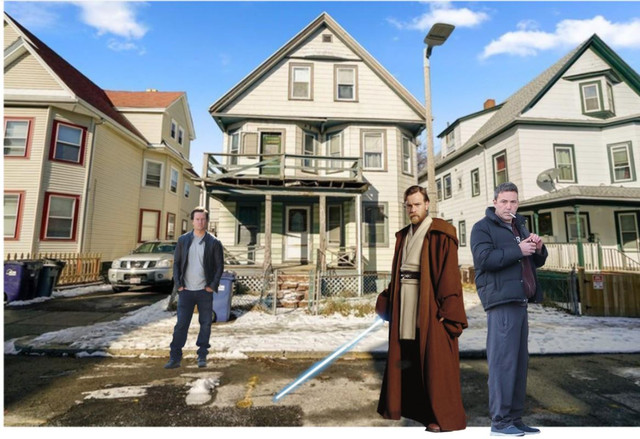 Star Wars was once a great original concept

that greedy Hollywood executives decided to turn into an unoriginal overhyped and overbloated franchise.

Eps I-III are trash. I have enjoyed nearly everything

else, though I haven't seen Clone Wars or the Ewok series. (I was a little disappointed by Rise of Skywalker, and Solo kinda sucked.) I have viewed a bootleg VHS of the notorious Xmas special, which was one of those steaming piles that's so bad it's good.

The original was an absolute mindbender in its day. I had to sit at the front on the floor at the Pi Alley the weekend it came out. Me and my brothers decided to stay to watch it a second time, and got seats.

Pi Alley was great for genre movies. Beacon Hill for B or C movies.

Now if they can only get Ben Affleck to guest star

He could evade Imperial storm troopers by flying the Millennium Falcon around the North End and Charlestown - and he could brag about doing the packie run in 12 parsecs (thought via Jim LaPorta).