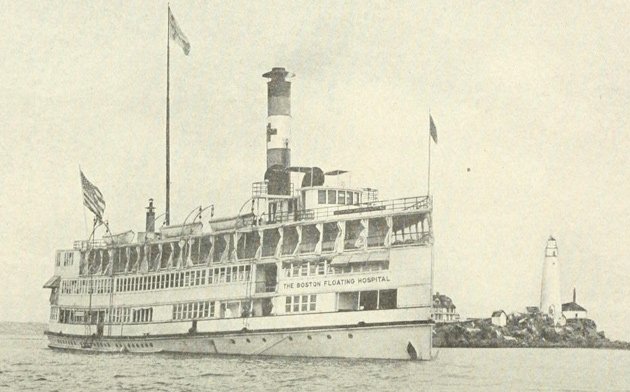 Boston Floating Hospital in 1916. From Harvard Medical School and its Clinical Opportunities.

The Floating Hospital for Children hasn't actually been on a boat since 1927, so Tufts Medical Center figured it's time to change the name - to Tufts Children's Hospital.

The hospital began as a hospital ship in 1894, based on the theory that bracing ocean air would help sick kids heal faster.

According to Harvard Medical School and its Clinical Opportunities, published in 1916, the Boston Floating Hospital was based on a similar ship in New York.

Mr. Rufus B. Tobey conceived the idea after talking with a former captain of the New York Floating Hospital. He thought that it would be a fine plan to take the sick babies from the tenement district, out where the cool breezes always blow.

The Floating Hospital at first used a barge, but eventually, its backers raised enough money, in particular from a bequest from Mrs. Sarah Potter, to buy "a twin-screw steamboat, 171 feet long and 44 feet wide" with enough space for permanent wards, a patients' deck with room for beds and seats for patients' mothers, laboratories, a pharmacy and dining rooms for nurses and doctors. Some 20 doctors and 70 nurses, along with 7 medical assistants and 2 lab assistants cared for patients on the daily harbor cruises.

Each morning during the summer, the Hospital boat leaves the wharf at North End Park to seek out the cool breezes down Boston Harbor. It returns in the evening so that mothers have an opportunity to see their babies. Preliminary to the admission of any child to a ward on the boat it is examined on the dock to ascertain the nature of its ailment. If a contagious disease is suspected the patient is not admitted. 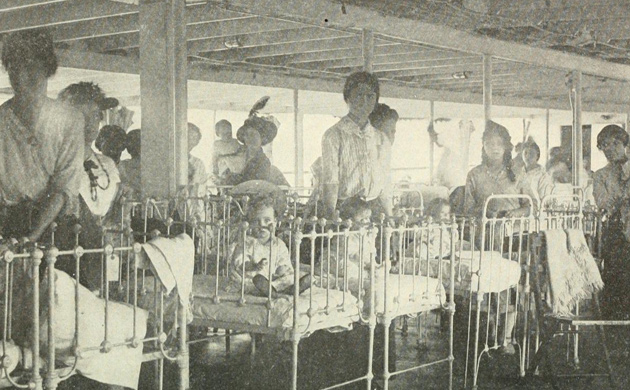 Not at all confusing!

Not at all confusing!

Naw, it will be easy to keep seperate

Just ask my friends who go to Boston College University

Where Triple Eagles are born.

Minor bummer, to me. "Floating Hospital" was unique, and probably led to some fun conversations in a place where those must be a nice distraction. Even if the literal name was long outdated.

Another case of seasickness,

Another case of seasickness, doctor? How queer! Well, I think I'll take a quick swim around the grounds to clear my head. Gooday to you sir!

I just hope all those people who donated to Partners realized that a lot of their money wasn't going to fund a few nurses but actually change letterhead to satisfy some marketing person's ego.

With all the health care

With all the health care issues in Boston, so glad they fixed this one. It's so important to be spending money on costs associated with a name change right now, instead of pay and PPE.

Theater District turns soggy after water-main break
Man sought for sexual attack at Tufts Orange Line station
The crap people in Chinatown still have to put up with
Person jumps from Tremont Street garage in Chinatown, dies
Guy with loaded gun and pal arrested trying to steal scooters out of a Chinatown alley, police say
Small Chinatown restaurant was a front for a big money-laundering and stolen-gift-card ring, feds charge