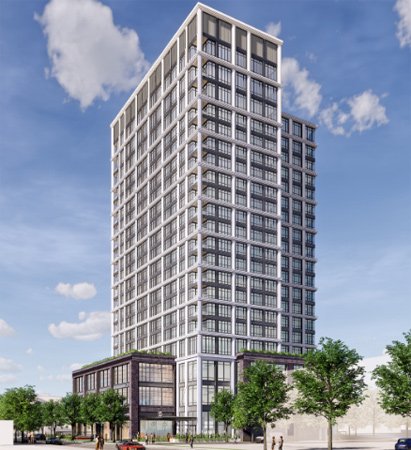 National Development yesterday filed detailed plans and renderings of its proposed 21-story, $210-million residential, office and retail building at 323-345 Dorchester Ave., the first of several buildings it hopes to build on the roughly 5.4 acres it owns on that side of Dorchester Avenue, near the intersection with Old Colony Avenue.

National Development says it will ultimately file a "planned development area" blueprint for the land, which would let it and the BPDA throw out the current zoning and negotiate just what can be built there - although the company says it "intends to meet the Boston Zoning Code dimensional requirements and project parameters as an integrated whole" - but for now is concentrating on just the one building, which would have 265 residential units, 47,000 square feet of office space and ground-floor space for a 10,000-square-foot grocery store and a restaurant, as well as 198 parking spaces in an underground garage.

Redevelopment of the Project Site is part of an effort to create a vibrant, mixed-use neighborhood with greatly needed amenities, job opportunities, and a diversity of housing types.

National Development says it will likely include more affordable housing units than the 13% generally required by the city, under a city rezoning effort along Dorchester Avenue between Andrew Square and Broadway aimed at turning a stretch of low-rise industrial and wholesale buildings into Boston's next new real-estate hotness. At 254 feet, the building would be several stories shorter than the 300 feet allowed under the Dorchester Avenue overlay zoning.

National Development says it would expand the current 5-foot-wide sidewalk in front of the site to a 31-foot-wide pedestrian and bicycle zone, opening onto a publicly accessible plaza:

Along Dorchester Avenue, an entry garden brings the lush character of the open space to the adjacent public realm. Transitions between the street elevation and the Project’s higher base elevation are mediated with design and program elements. These include stone blocks, serving as both seating elements, steps, and play areas, as well as garden spaces that comfortably separate different elevations. An accessible ramp is seamlessly incorporated into the park design, lined by lower plantings that break the grade separation. Upon completing the grade transition, a pervious seating area is at the center of the open space, under a mix of canopy and understory trees. This area will offer a variety of dynamic lighting and installation opportunities, visible from Dorchester Ave and within the future project area, serving as a draw through the open space. Further into the space, a flexible lawn area connects back to the interior of the Project Site and the future Ellery Street roadway. This area is a key focus for additional activation opportunities within and around the space throughout the year. Community activities such as movie nights, markets, and seasonal festivals, as well as an integrated fitness network that could extend throughout the corridor all have been considered during space planning and design.

The Proponent is working with the surrounding residential and business community to identify how programming and open space design can further support a vibrant, engaged neighborhood.

The filing discusses how the company's architect's came up with the exterior design:

The Project’s podium is proposed as a textured iron spot brick with varied tones of purple paired with factory style-sash windows. The deeply hued brick palette provides a complementary contrast to a lighter precast concrete in the tower above. The solidity of the podium’s masonry piers is balanced by floor-to -ceiling windows and retail storefronts. Pedestrian zones immediately adjacent to the ground floor are covered by a gracious canopy that provides protection from inclement weather and enhances outdoor seating zones. The canopy is proposed as steel and wood decking, maintaining the industrial palette. Wrapping the building’s ground floor, the canopy provides an intimate scale to the retail storefronts and lobby entries. ...

The tower’s façade introduces a light colored, profiled precast grid that creates depth and varied shadow as the sun moves across the sky throughout the day. The double-height framework reduces the scale of the tower and provides visual interest. Strong horizontals with stepped profiles define the primary tower form, while a varied rhythm of triangular profiled verticals allow for open corners on the smaller, westerly tower. Within the dominant precast frames, a secondary grid is introduced at the slab edges with a corrugated profile at the horizontal spandrel. The integrity of the frame is maintained while the glazing moves in and out of plane with the precast to accentuate depth. Elegant in its articulation and proportions, the clean-lined geometry of the precast grid feels distinctly modern.

The company hopes to begin 30 months of construction this fall. 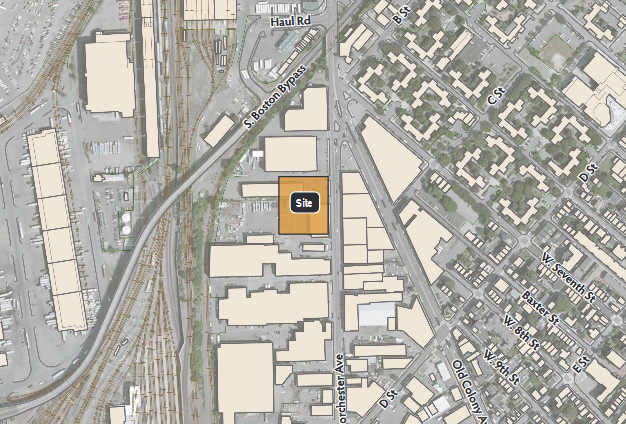 Rendering of the view from the street: 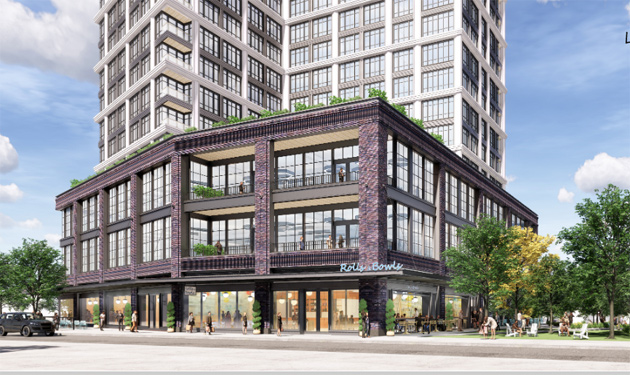 So if Dorchester ave South

So if Dorchester ave South Boston can get approved for a 21 story building ( in a residential area) can the same approval happen for to a building let’s say on lower Bennington Street in East Boston.

Anything's possible, but probably not

The city basically rezoned that stretch of Dot. Ave. in 2016 to allow for just this sort of thing. Bennington Street? No.

The FAA is the big factor in

The FAA is the big factor in limiting height on Bennington and Eastie in general, that will probably never happen.

Not necessarily true, as long

Not necessarily true, as long as it doesn’t align on a flight path, Day Square and areas around wood island station in East Boston are vulnerable areas, that is where most of the planes fly over when they approach the runway while landing.

It's harder to go tall in

It's harder to go tall in East Boston because the airport is right there. I don't think 21 stories could happen, but maybe 10-12.

Wow! So M A N Y adjectives they must have worn out a thesaurus.

This is my fav:
"Along Dorchester Avenue, an entry garden brings the lush character of the open space to the adjacent public realm."

Just say: What if the JFK Bldg was re-skinned and residential

At first glance over lunch, I thought this story was about re-skinning the JFK Building. These architects seem to have a soft spot for that "book tower"

There are other architects in Boston...

Can we please let someone other than Elkus Manfredi design buildings in Boston. It's getting a bit... sterile... Theres thousands of incredible, young, hungry architecture firms in this city doing great work.

What makes you think young

What makes you think young architects have better ideas? Typically what an architect designs is not what a developer is willing to fund. And then there's the value engineer...

There are dozens UHub commenters who consider themselves the peak of aesthetic sensibility yet have never liked a single proposed structure. Maybe we draft them.

All that's missing is...

Enjoy the views as you look down upon weary commuters who already know A Street was never designed for current traffic volume and just have a hearty laugh knowing that you've just added 45 minutes more to their commute, each way!

This building is a five

This building is a five minute walk, tops, from Broadway Station.

I'm a huge transit enthusiast, but that would be more reassuring if the Red Line was running more reliably these days.

Or 600 meters. I can walk about 100 meters per minute, especially when it's cold AF out. So more like a 6-minute walk. That said, it's kind of a dodgy walk to Broadway; the sidewalks on the bridge over the Bypass Road are in terrible shape and you have to be super careful to not get hit by buses going in and out of the T bus yard.

But they were able to turn the long-blighted area between Albany/Washington/E. Berkeley/Mass. Pike into the new hotness with Ink Block so I could see this being a success.

Boston itself wasn't designed for cars. If you insist on driving then blame yourself for your choices.

Boston wasn’t designed to house this many people either, yet here we are.

I'll leave this as an exercise for the reader. Google

and see how many people lived here then. Compare to today ...

The big difference is the amount of cars. Boston doesn't have room for anymore vehicles. Of course there is also space per person. Single people generally rented a room, rather than a whole apartment.

How many of those are

How many of those are children?

A city that existed before cars were made wasn’t designed for cars?!?

Normally I say YIMBY all day all the way, build baby build, but isn't this the site of Peter Welch's Gym? They really do want to get rid of everything cool left in this city.

But only for people who bought their home in the '80s.

Everyone else can move to Toledo or Phoenix or wherever.

I don't know enough to know if you're waxing nostalgic or making a joke but it is a Gold's Gym, or was recently, no? Was it something else beforehand?

The gym is on the other side

The gym is on the other side of the street.

The height limit is 300', and they're going 254'. Did they really calculate that the footprint can handle 265 residential units and not, say, 310? Is there some cost increase if you taller (or more total sq. ft.)?

Wouldn't more building be even more profitable? Why wouldn't the developer go for it?

I think the most likely thing

I think the most likely thing is parking. If they're trying to keep it above a certain ratio so as to avoid pissing off the neighbors, this may be the point at which adding another floor on top would have required excavating a whole additional floor down below for the parking garage, and that probably wasn't worth the additional cost. #CarsRuinEverything

Wait, officer, you're telling us it's illegal to shoot off fireworks in Boston? Golly!
Last patients discharged from Covid-19 hospital at the convention center
South Boston triple deckers go up in flames in seven-alarm fire
Springfield teen charged with possession of a gun loaded with a lot of bullets in South Boston
Local company whose origins date to Edison's invention of the light bulb gets out of the light-bulb business
Convention-center hospital to stop accepting patients